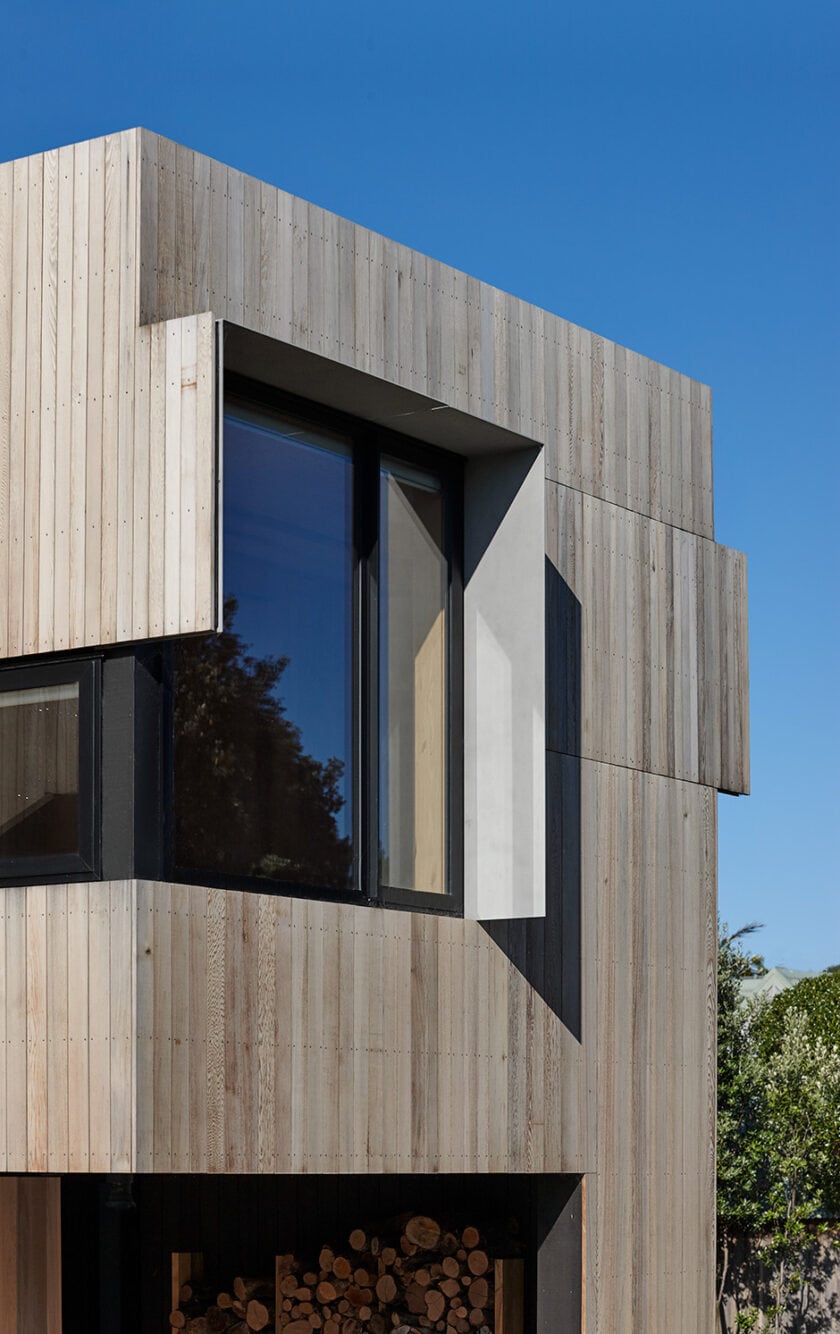 This bach on Great Barrier references de Stijl design theory with a plan that offers courtyard living and then some.

In an enclave of holiday homes set among farmland and bush at Medlands Beach on Great Barrier Island, this boxy bach makes clever use of Dutch design theory to work its angles within the environment. And this home has more angles than most around here; dubbed the Pinwheel House, it really does resemble the shape of its namesake. 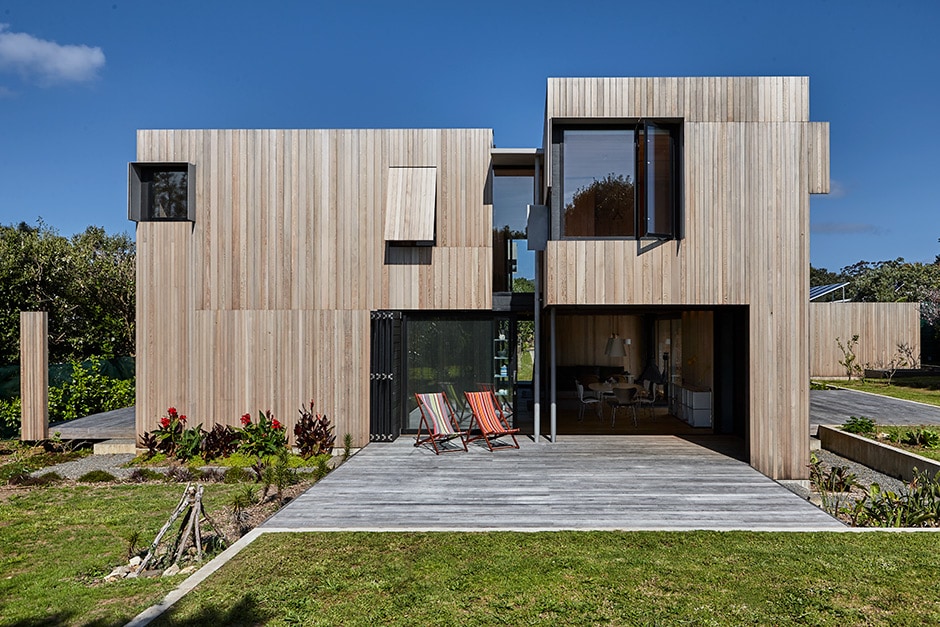 From the onset of the project, Wellington-based architect Stuart Gardyne’s enquiry for the site  was informed by the homeowners’ interest in the pleasures an enclosed courtyard would offer. It was an interesting proposition; privacy and tranquility are characteristics not always associated with beachside dwellings in Aotearoa, which often champion the view above all else.
Given the relatively small section and the planning rules that allowed only 15% site coverage, the concept of an internal courtyard wasn’t practical here, but, says Stuart, “There are many precedents for courtyard houses in the architecture of many cultures.” This understanding led him and his team at Architecture+ to begin an exploration of this design element. 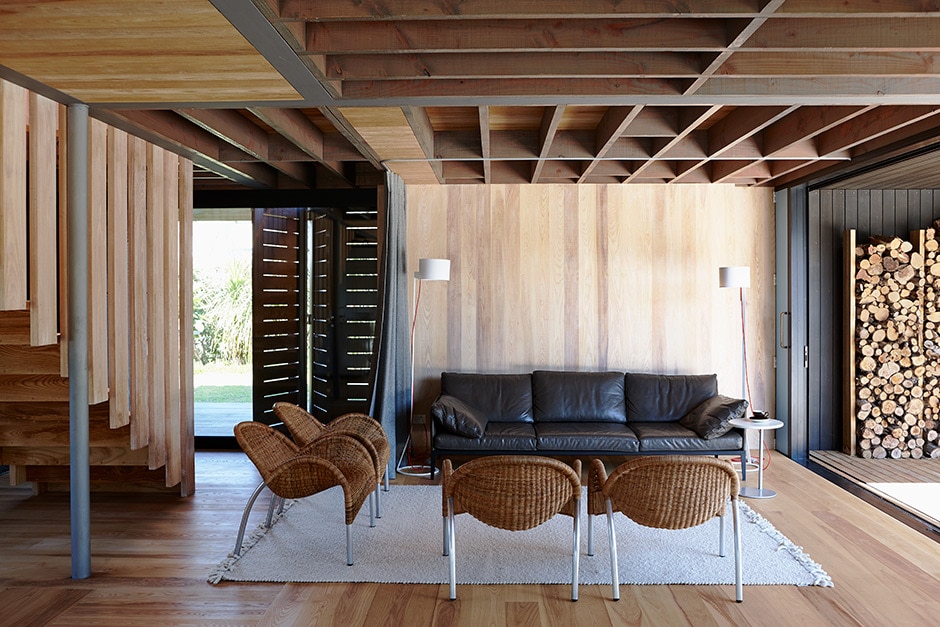 ABOVE It’s a barefoot lifestyle here and the natural timber used throughout the home reflects this. With an oiled finish, in places it’s blonded to knock back the colour and achieve a softer, more weathered look.

The site restrictions meant that instead of a single level facing inward, the best option for this family of six was to build up. Stuart has a long-held appreciation for geometry, and referenced the De Stijl art movement to focus the design on intersecting horizontal and vertical lines, conceiving a two-storey structure where a pinwheel plan is generated by four cedar-clad walls that extend into the garden, creating four outdoor living spaces partially covered by four first-floor bedrooms that cantilever over the decks below. 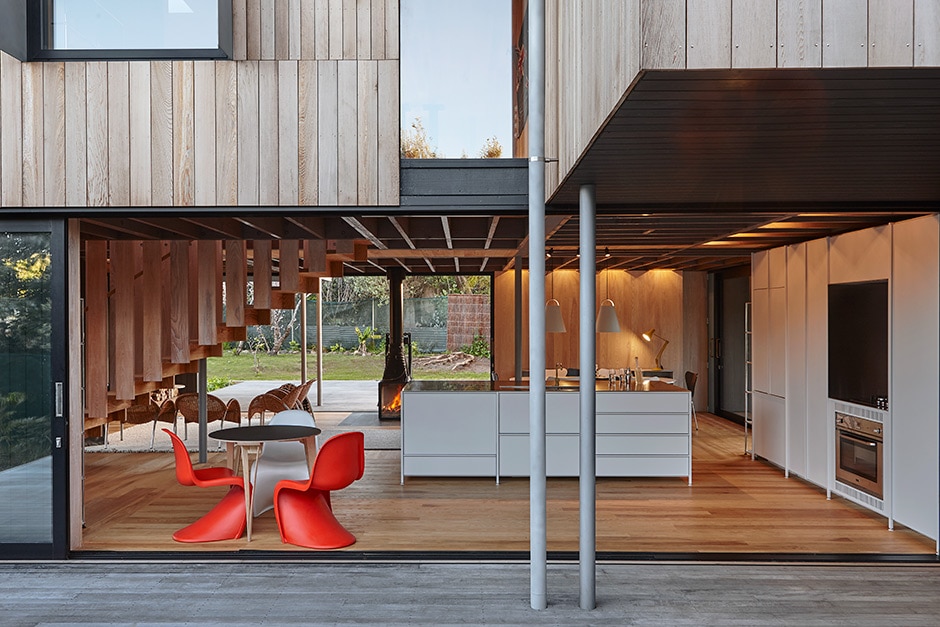 ABOVE The living spaces include a modular KXN kitchen by IMO with a furniture-like appeal.

Climate-wise, Great Barrier Island is often warm and wet, so the semi-covered decks create courtyard spaces that can be utilised no matter the weather while providing a connection to the garden, a sheltered entryway and barbecue area, and protection for the wood stack that fuels the log burner that heats the home. 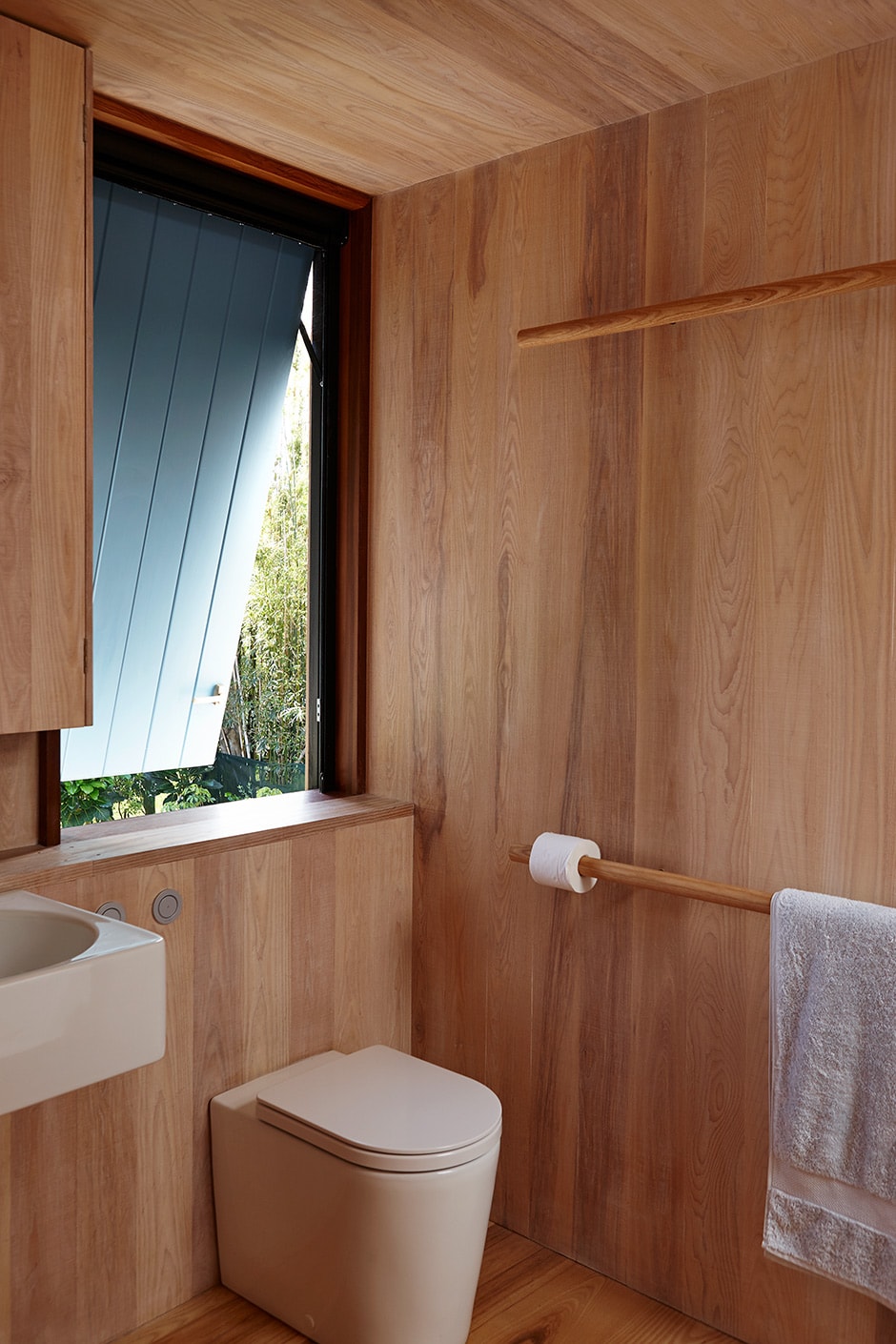 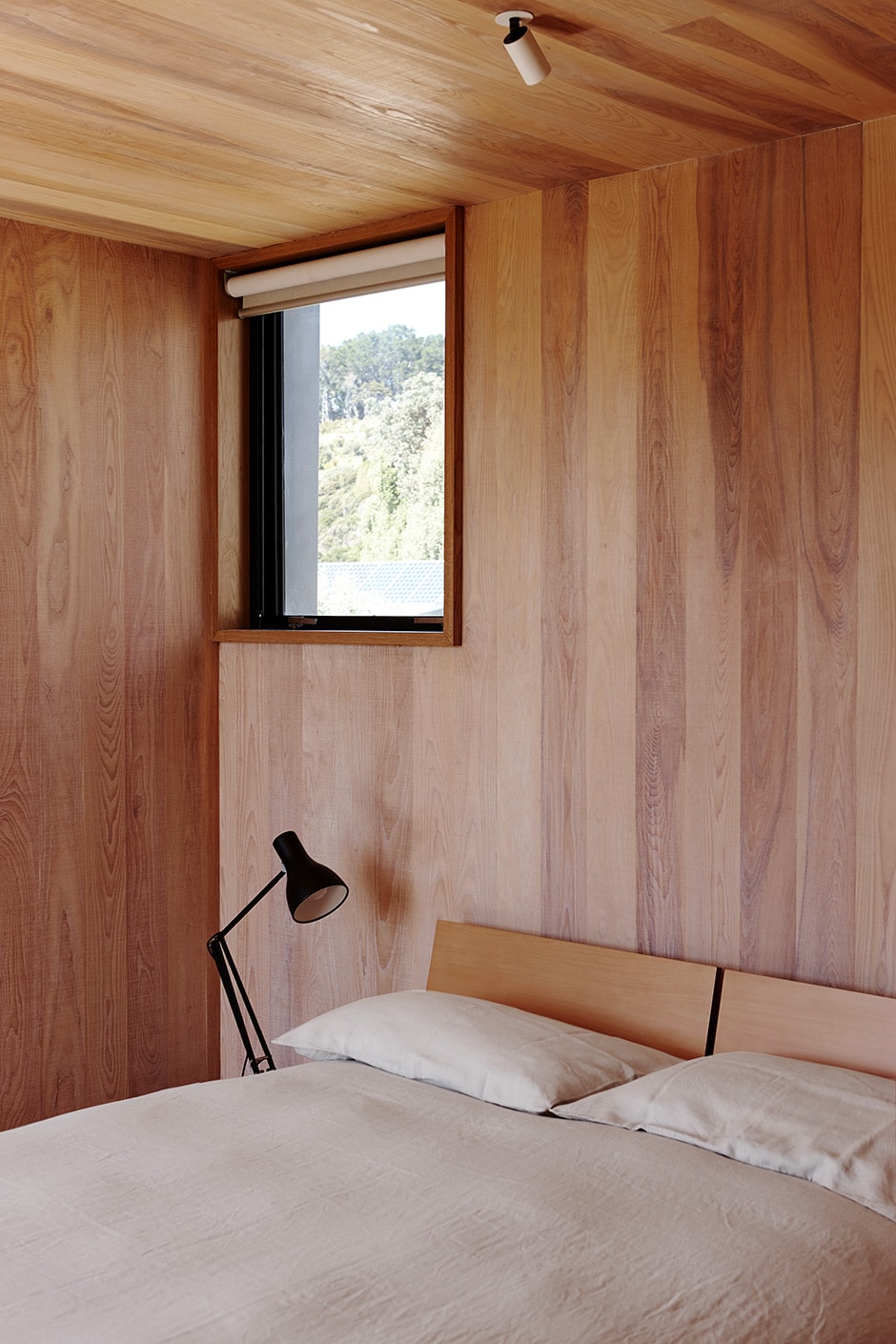 TOP With roof windows by First Windows & Doors providing ample natural light, shutters were selected for the other bathroom windows to offer privacy and ventilation as required. Shutters can also be used to close off the roof windows if desired. Other clever built-in details such as towel rails that double as toilet-roll holders are very much in keeping with the efficiencies of bach life. ABOVE One of the four identical bedrooms styled to suit a roster of guests.

The courtyards can be accessed on all sides of the ground floor, through over-the-wall and stacker sliding doors from APL’s Architectural Series. “The climate here can be lovely, so you can have the large sliders open a lot of the time, and you can choose which side to open depending on the time of day and the breeze,” says Stuart. “The house doesn’t have views, so the focus is on the space you’re occupying.”
Protruding windows, shutters and awnings add character to the simplified rectangular shape of each arm of the pinwheel, and allow the home to be opened wide when it’s occupied and completely closed when it’s not. 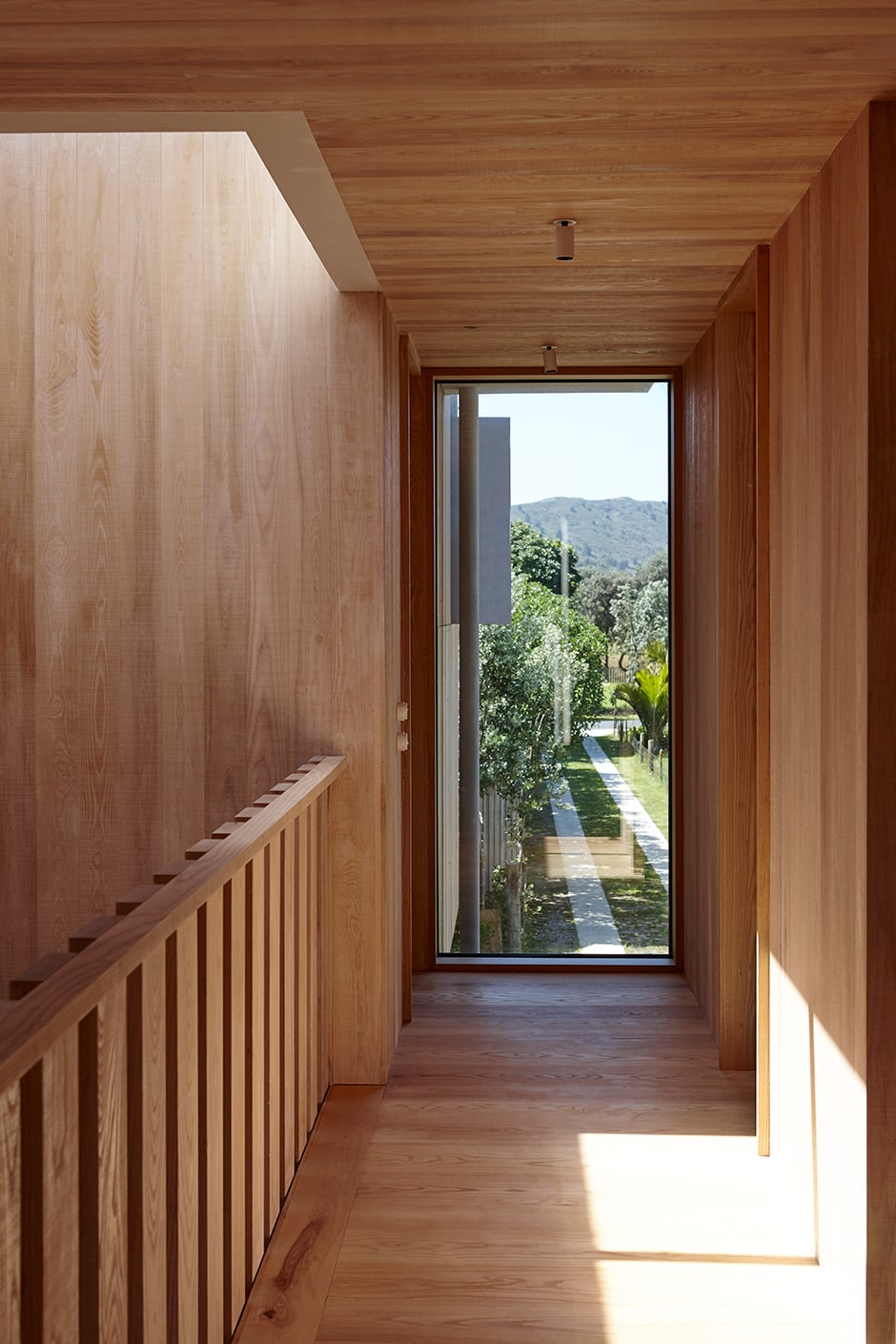 ABOVE In the upstairs hallway, a full-height picture window by First Windows & Doors takes in the lush sight of native plants thriving along the driveway.

Inside, the ceiling, walls and floor are all made from the same American white ash, yet they appear different thanks to the varied treatment of the timber. Also encased in wood, the staircase ascending from the ground to the first floor casually delineates the living zones according to their various functions throughout the day.
“Being able to enjoy one space in different ways really appeals to me as an architect,” says Stuart. “As the sun moves around, different parts of this living space come into play: the family can enjoy breakfast on the east deck or inside the east sliding doors, and then later sit around the fire on the west side.”
Like the other properties on the island, this house is off the grid, so sustainable solutions for everyday needs had to be incorporated into the build. Photovoltaic power and batteries, solar water heating, waste-water treatment and rainwater collection were all necessities, and the materials used, including the timber cladding and lining inside and out, were chosen for their small carbon footprint. 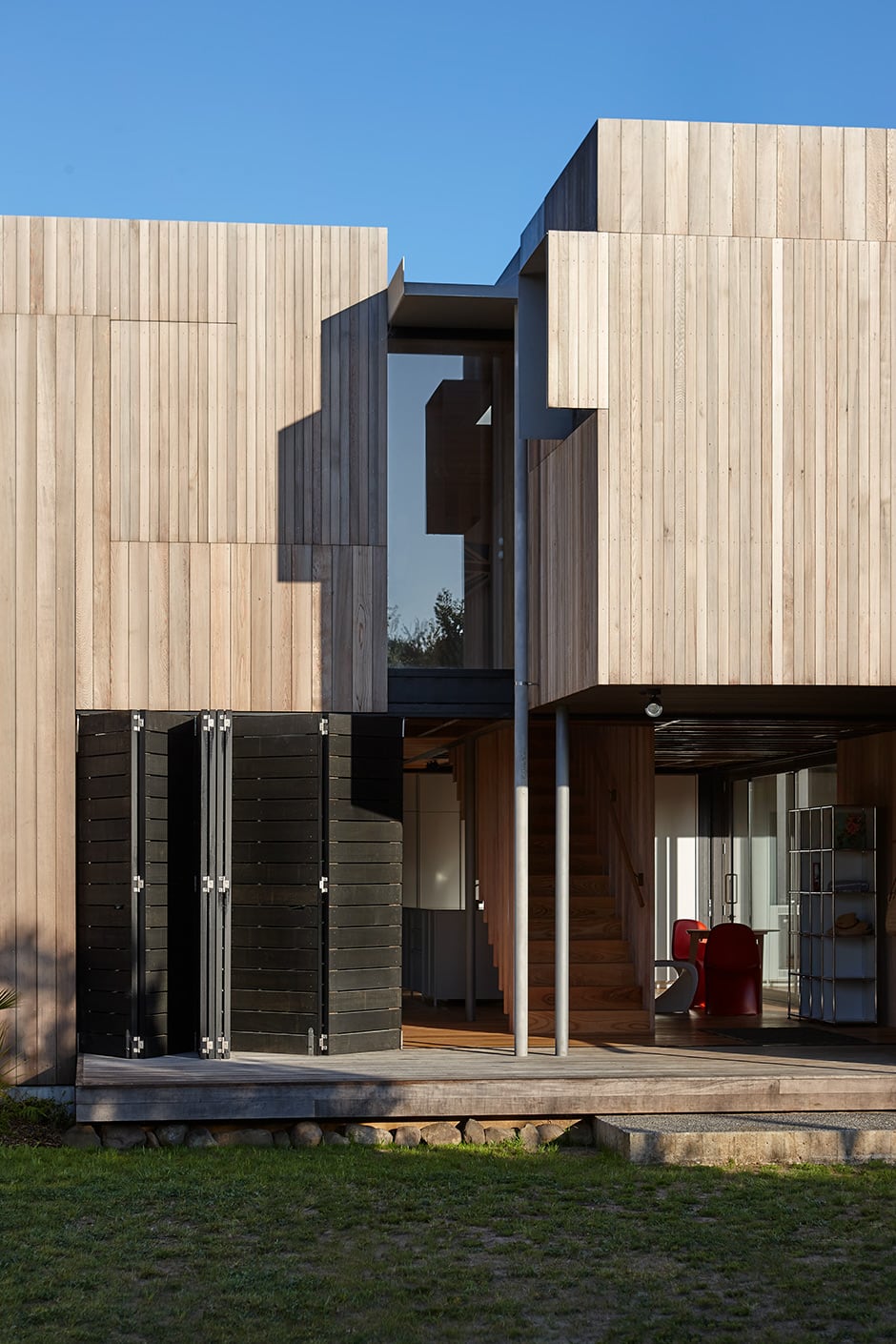 ABOVE The custom slatted cedar bifold doors by John Scott and the crew at Great Barrier Building Company on the ground floor can be closed or partially opened to screen and shade.

Efficiency and ease are also high on the list of desirable qualities for a bach. With this in mind, the usual bedroom hierarchy was done away with in favour of four simple upstairs sleep spaces with layouts that echo each other, enabling them to effortlessly serve whoever might be staying the night on any given visit to the island.
The two matching bathrooms follow the same flexibility principle. In each of these expertly resolved spaces, natural light streams in above the showers through roof windows by First Windows & Doors, bathing the warm timber walls in a golden glow.
“The house has an initial simplicity that reveals itself to be complex on studying it — the elegance of the structure that rotates in a pinwheel manner, the patchwork cladding…” says Stuart. “I’m very interested in spending a lot of design time making complex things feel and look simple, and everything feel natural and in the right place — formal, yet casual enough not to feel restrictive.”
The references of the De Stijl movement’s geometric visual language, in which form follows function, serves this beach house well.
firstwindows.co.nz

Whānau and whenua are at the heart of this renov