The science of sleep 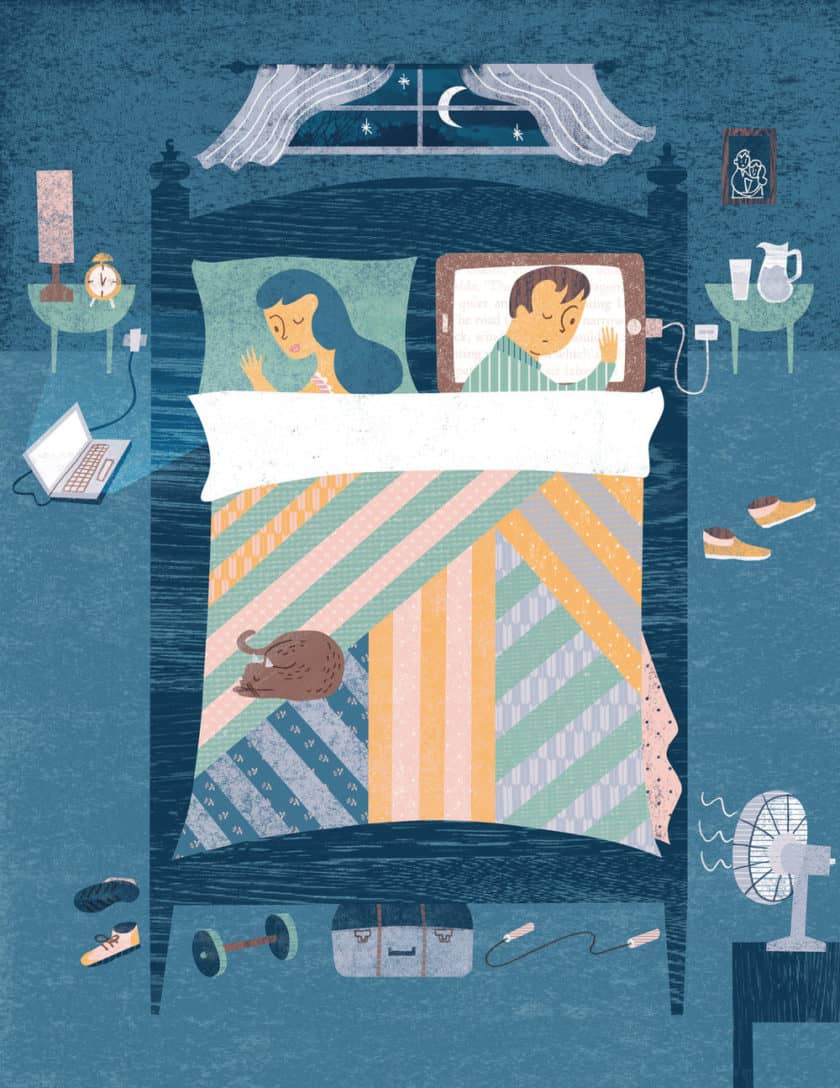 Sleep. You need it like you need water – yet so many of us are slumber-thirsty. You require seven to nine hours every night, unless you’re genetically lucky – in which case, people can consistently get by on significantly less. Napoleon and Margaret Thatcher, for example, laid down for just four hours a night, while Barack Obama rarely gets horizontal for more than a Michelle-infuriating six.

There’s the usual unsavoury lineup of sleep deprivation side effects – depression, memory loss, slow reaction times etc. And then there are the others. ‘Social jetlag’ is an industrial age-old problem that’s recently been given a name. Caused by early starts on weekdays, ‘corrective’ binge sleeping on weekends, then pitting body clock against alarm clock on Monday morning as a result, social jetlag proves that sleep deprivation is as bad for your health as working.

Then again, it could be that said alarm clock is going off too late rather than too early – cutting you off just as you’ve entered a new sleep cycle and leading to murderous levels of brain fog as a result. As a sleep cycle lasts for 90 minutes, some experts advise counting backwards from your planned wake-up time in 90-minute blocks – which may ironically involve staying up for an extra hour in order to get a better sleep.

But wait, are you even using an alarm clock in this Age of the iPhone? You should be. We now know that using  blue-light-emitting devices before bed suppresses the sleep hormone melatonin and stimulates the brain, leading to less time spent in restorative REM.

There are even more obvious things that stop the slumber. So obvious that we often overlook them till the toothpicks propping open our eyelids snap in half. Owning the right mattress, for example. Sleepyhead suggests laying on a showroom bed in the same way you would at home – unless, of course, you sleep naked. Better for everyone involved then, that you wear comfortable clothing and test each bed out for five to 10 minutes. And, if you sleep alongside someone, take them along to check for partner disturbance of the physical kind.

Other tried-but-forgotten advice includes avoiding going to bed thirsty – or overly hydrated. Exercising every day – even if it’s just for 20 minutes. And ensuring your room isn’t too light, cold, or noisy.

But what if your body is at optimum hydration levels, you’ve walked around the block seven point five times, and your room has been feng shuied to grand master standards? Why can’t you get to sleep?!

Okay, calm down. Have you tried inhaling through one nostril? Yes, really. This is a yoga method that is said to reduce blood pressure, relaxing you. Just lie on one side, rest your finger on the opposite nostril and breathe deeply.

Or, how about patting your own head or stroking your own hand? Doing so is said to set up a comforting sleep trigger that you can repeat whenever you need to send yourself back into a sleepy state.

Are you rolling your eyes yet? Good. Apparently rolling your eyeballs upwards repeatedly can send you into sleep mode as it simulates what happens when you drift off – possibly inducing a rush of melatonin.

You could also try eyemasks, white-noise machines in flavours ranging from cricket to dolphin, or industrial-strength self-moulding ear plugs. But, at the literal end of the day, the key is not to stress – even though, we know, a lack of sleep can lead to high levels of the stuff. Scientists have recently found that a 30-minute nap can restore hormones and proteins to normal levels after only getting two hours’ sleep the night before. So do your best to keep your eyes closed, but if you don’t succeed, just try again later on.

Because you actually may not be failing in your failure to get eight hours of unbroken sleep at all – there are historians who point to evidence that we may not be wired to sleep that way in the first place.

In pre-industrial times broken sleep was not only the norm, it actually sounded kind of fun. There was the First Sleep, for four to six hours, then people would wake up, kick around for a couple of hours – even catch up with a neighbour – before heading back to bed for another round of sleepy time.

When a study simulated this pre-industrial 14-hour dark winter night, with no access to artificial lighting, results were telling. Participants, after a few days of catch-up binge sleeping, fell into a similar rhythm of two sleeps with a couple of hours of leisure time in between. So, next time you wake up at 2am, wake your neighbour up for a chat. After all, we’re all in this long night called life together.

5. Eat to sleep Choose sleep-inducing foods, those that are high in tryptophan, such as poultry, milk products, cereal grains, avocados, pumpkin, chickpeas and walnuts. Also include foods containing magnesium and vitamin B when making dinner.

4. Alco-no Avoid alcohol altogether if you have hit crisis point. It can disturb your normal sleep phases and can make you wake in the night with a full bladder. Although a seductive depressant, alcohol demands too much of the body and conflicts with peaceful slumber.

3. Make a list Rather than constantly running through everything you want to remember the next day, make a list. Then you can stop worrying about forgetting and relax.

2. Get cosy Cold feet can keep you awake, so pull on some bed socks or have a warm bath before bed.

1. And… stop. Cease all work three hours before you turn in. Eat, then wind down and relax. Use a routine to prepare for sleep – but only go to bed when you feel tired. Read a book or listen to relaxing music, making sure your bedside light isn’t too bright.

Tips edited from I Want To Sleep, by Harriet Griffey, published by Hardie Grant, $24.99.