This ‘stealth bomber’ build is full of big reveals 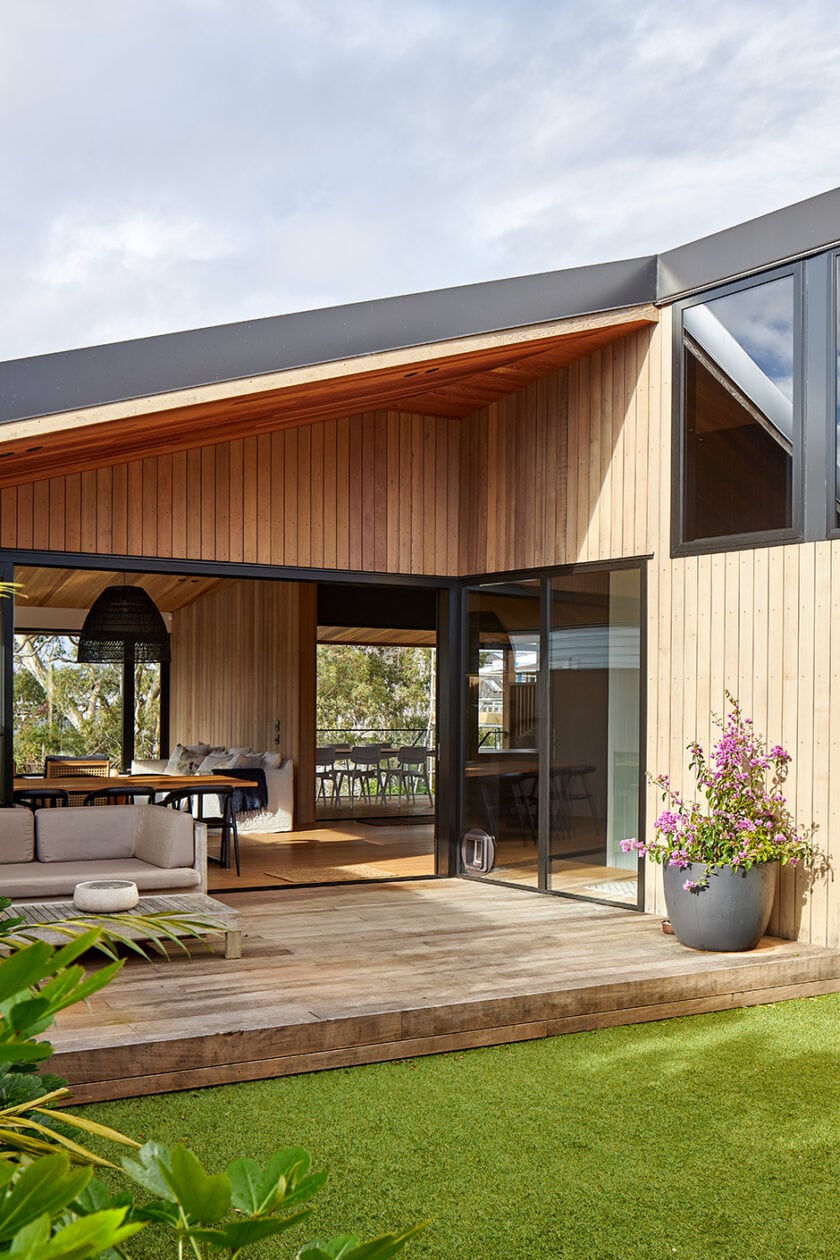 The view from the street tells little of the family home hidden inside this project by Dorrington Atcheson Architects.

In the central Auckland suburb of Westmere, a neighbourhood of tree-lined streets flanked by heritage bungalows and villas, the frontage of this family home by Tim Dorrington tells little of the laid-back lifestyle that plays out on the inside. A director at Dorrington Atcheson Architects, Tim has known homeowners Ginny and Dave Openshaw for a very long time, and while devising the plans for a new dwelling for them and their children Sam (12) and Sophie (9), the old friends spent many a night mulling over different forms, philosophies and references. 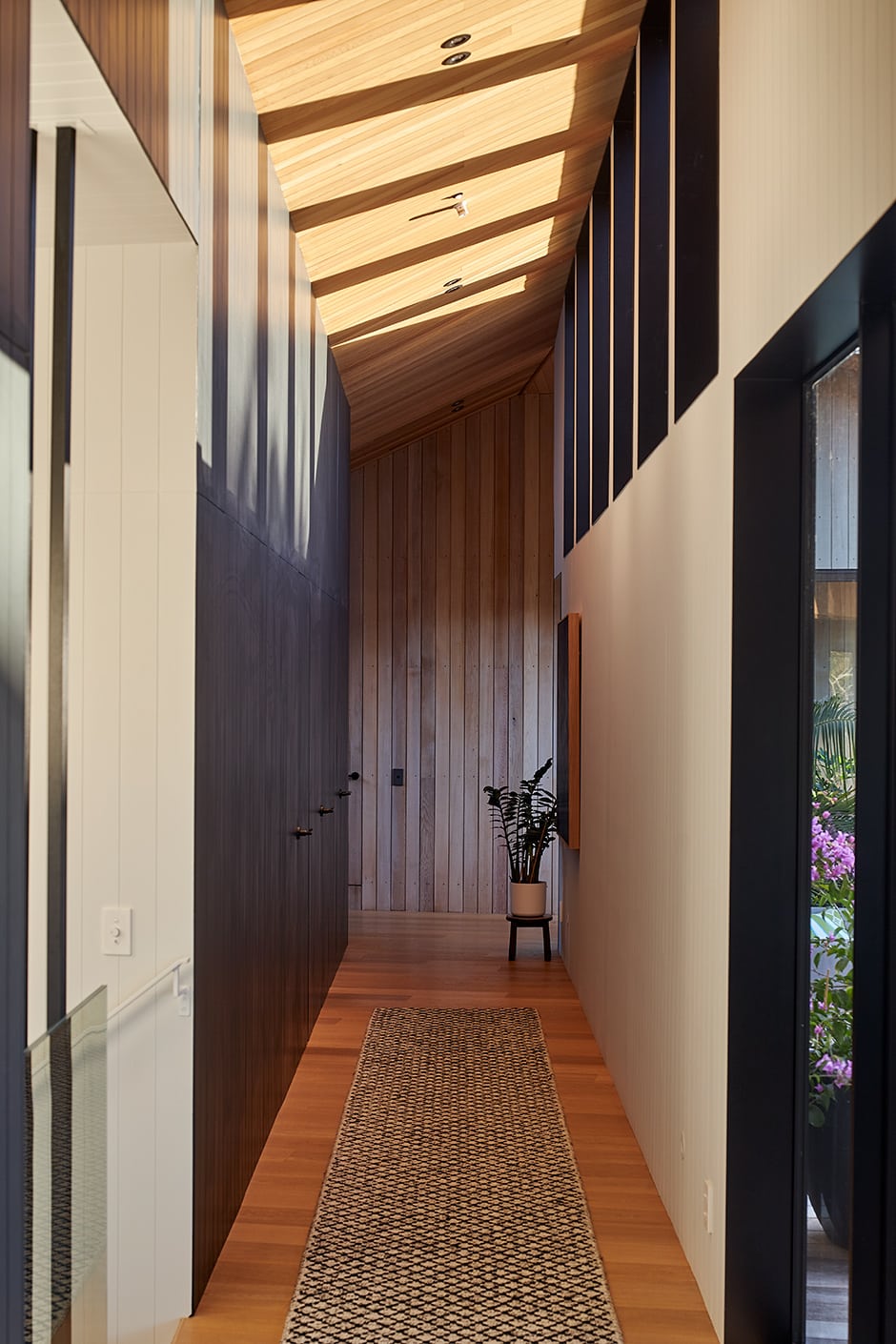 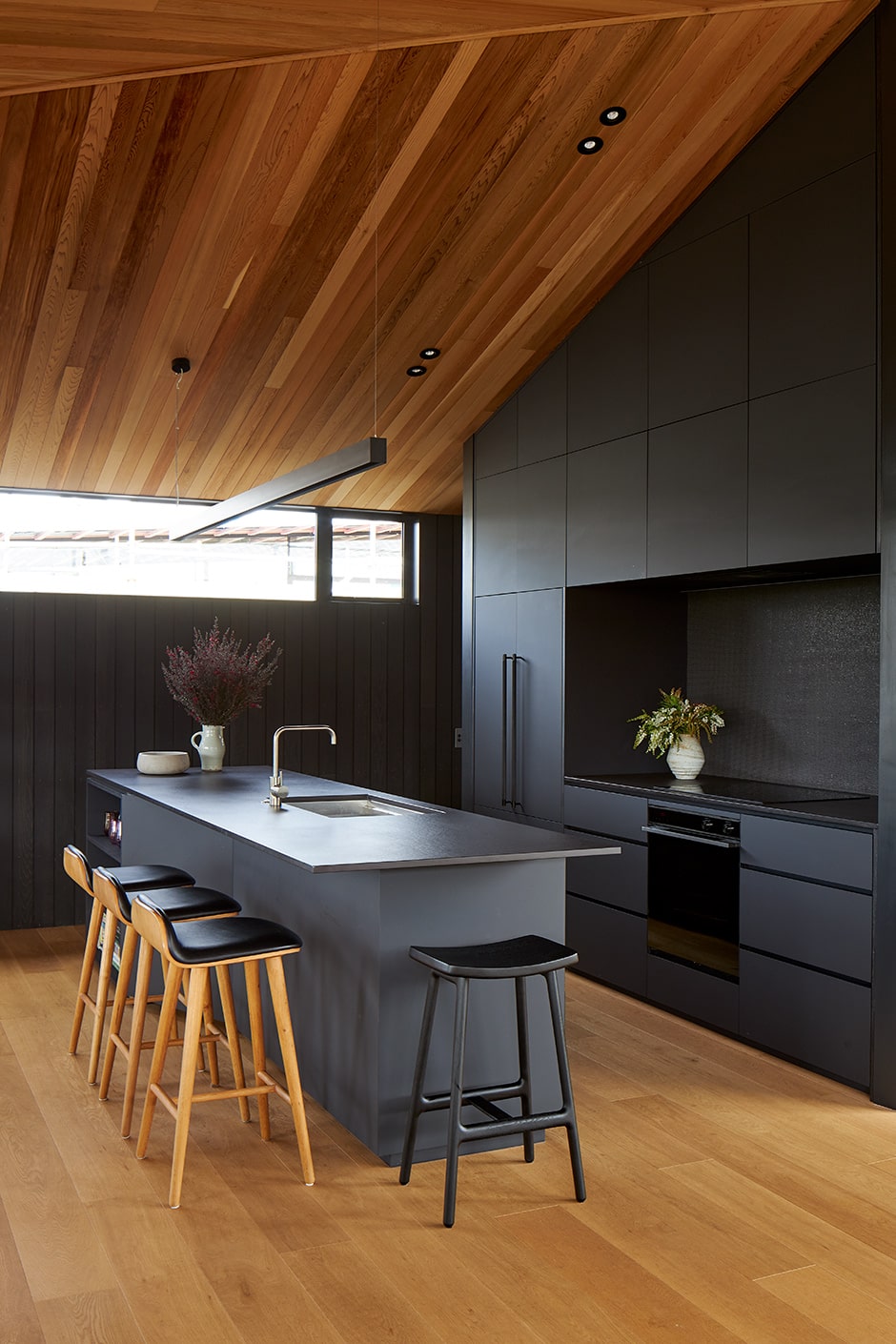 TOP A repetition of the vertical cedar cladding on the exterior of the home, tongue-and-groove panelling lines the hallway on the first floor, concealing the guest bedroom, guest bathroom and laundry. Overhead, First Windows & Doors Metro Series windows create a play of light and shadow, and allow cross-ventilation. ABOVE Tonal, textural surfaces and integrated appliances embody sleek simplicity in the black-on-black kitchen (with adjoining scullery), where clerestory windows from First Windows & Doors’ Residential Series shed light on the matter while preventing prying eyes.

“Not to be un-neighbourly, but there’s no view out that way [to the street], so Dave and I came up with the idea of the ‘stealth bomber’ — we were trying to be secretive and wanted to create surprise when you come through the house,” says Tim of the inspired result of their discussions.
This goal to generate a sense of a reveal from the home’s entry was encouraged by the expansive view from the rear of the property out across the bordering reserve to the bay beyond. “You can’t see anything from the front door, then suddenly you see the courtyard, then the journey continues on down the hallway to the living area, where the view of the park opens up,” says Tim. 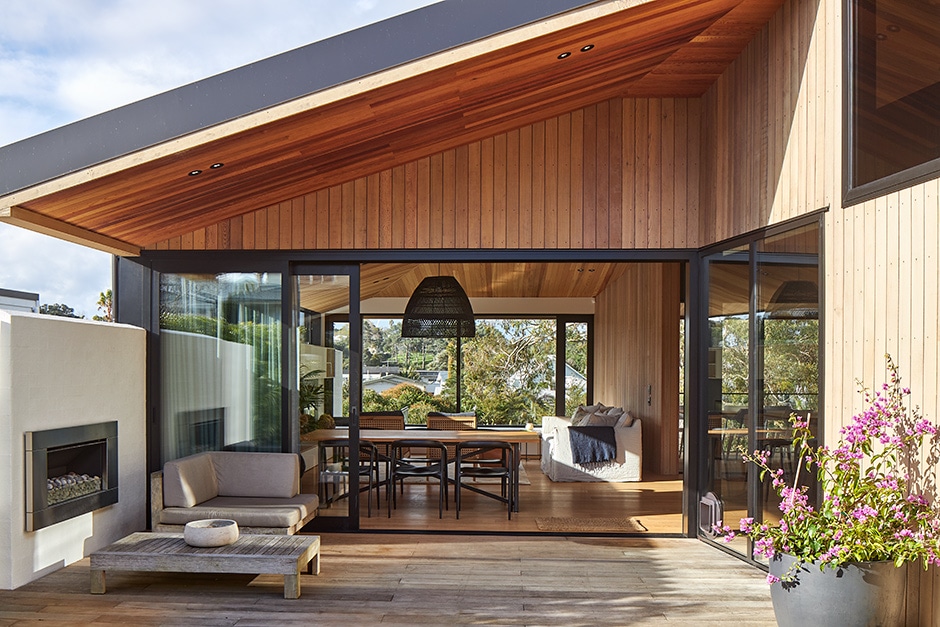 ABOVE Shielded by a three-quarter-height bagged-brick wall that continues into the living spaces (where it’s topped by Residential Series windows), the courtyard faces north and captures rays from the west, so it gets good sun all day long. The sliding doors seen here are from the APL Architectural Series.

The first floor of the home is arranged in a dumbbell shape, with the entry, garage and main bedroom at one end, and open-plan kitchen, dining and living spaces at the other. They’re connected by a leafy courtyard that maximises light while maintaining privacy. Downstairs is Sam and Sophie’s domain — a kid-friendly hangout comprising two bedrooms and a bathroom on either side of a rumpus room, plus easy access to the backyard with its pool, spa, basketball hoop and path down to the park. 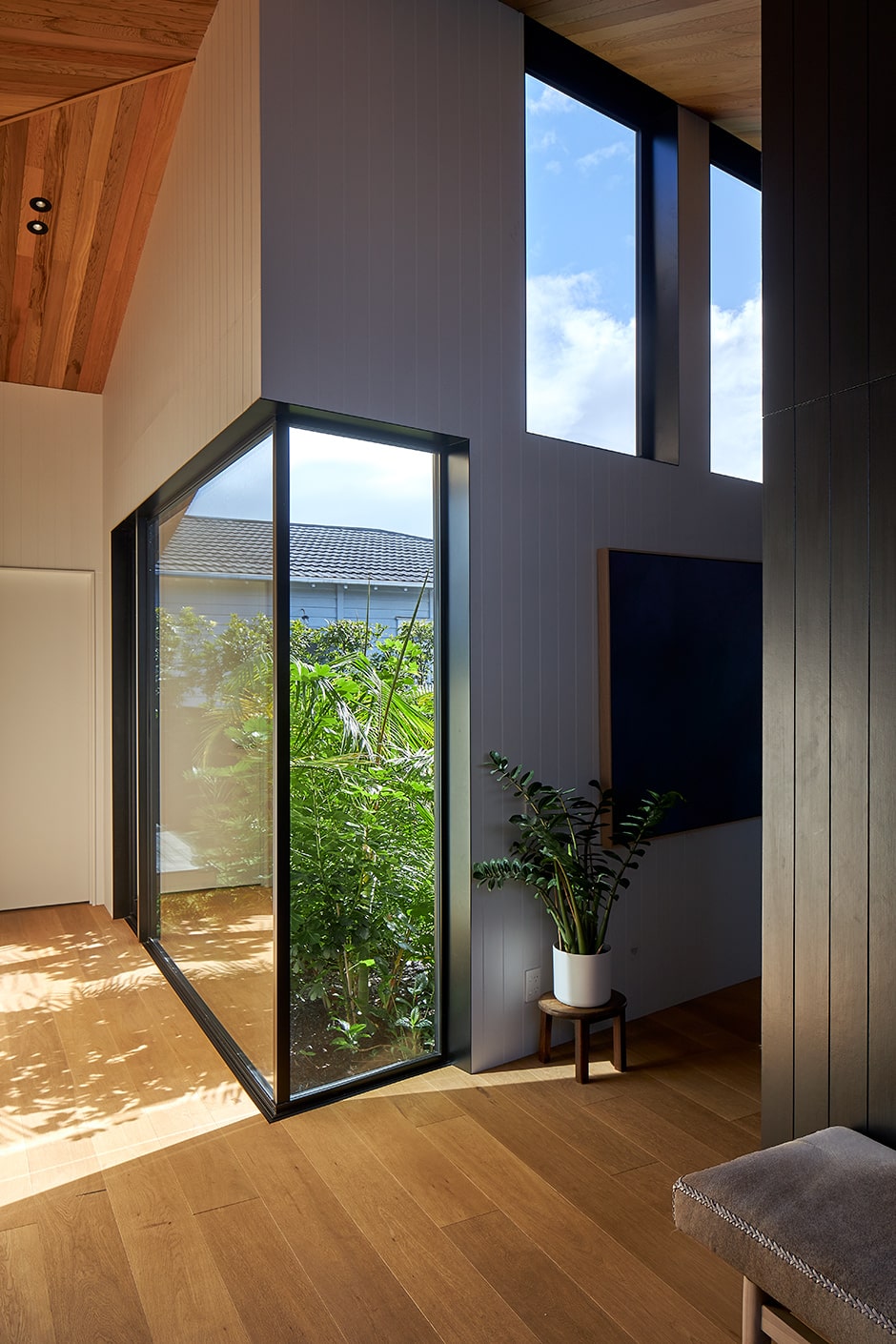 ABOVE Also in the hallway, picture windows from the Metro Series let the outside in and turn the courtyard garden into a sort of terrarium. The matte black powdercoated joinery by First Windows & Doors is set in custom-edge profile surrounds, designed by Tim to create negative detail against the wall panelling.

“Pseudo-intentionally, the main bedroom is at the furthest possible point from the kids’ spaces,” says Tim. This configuration results in the sort of sanctuary parents dream of, complete with an ensuite tiled in a soothing sage green and a glassed folly housing a single palm tree (“the world’s smallest courtyard”, Tim calls it) providing a sensory experience, particularly on rainy nights.
“Indoors and out, we look at windows as holes in walls or an absence of wall, but we’ve really tried to work with the absence of wall here,” says Tim of the overall strategy. Stacker sliding doors from the APL Architectural Series were specified in both the kitchen and dining areas, and “once they’re open, the deck becomes part of the kitchen and the courtyard becomes part of the dining — so you can really open up [those barriers]. Very few windows here are holes in walls as such — they’re all about trying to give you an experience that’s different to what a wall would, giving you facility to interact with the inside and outside.” 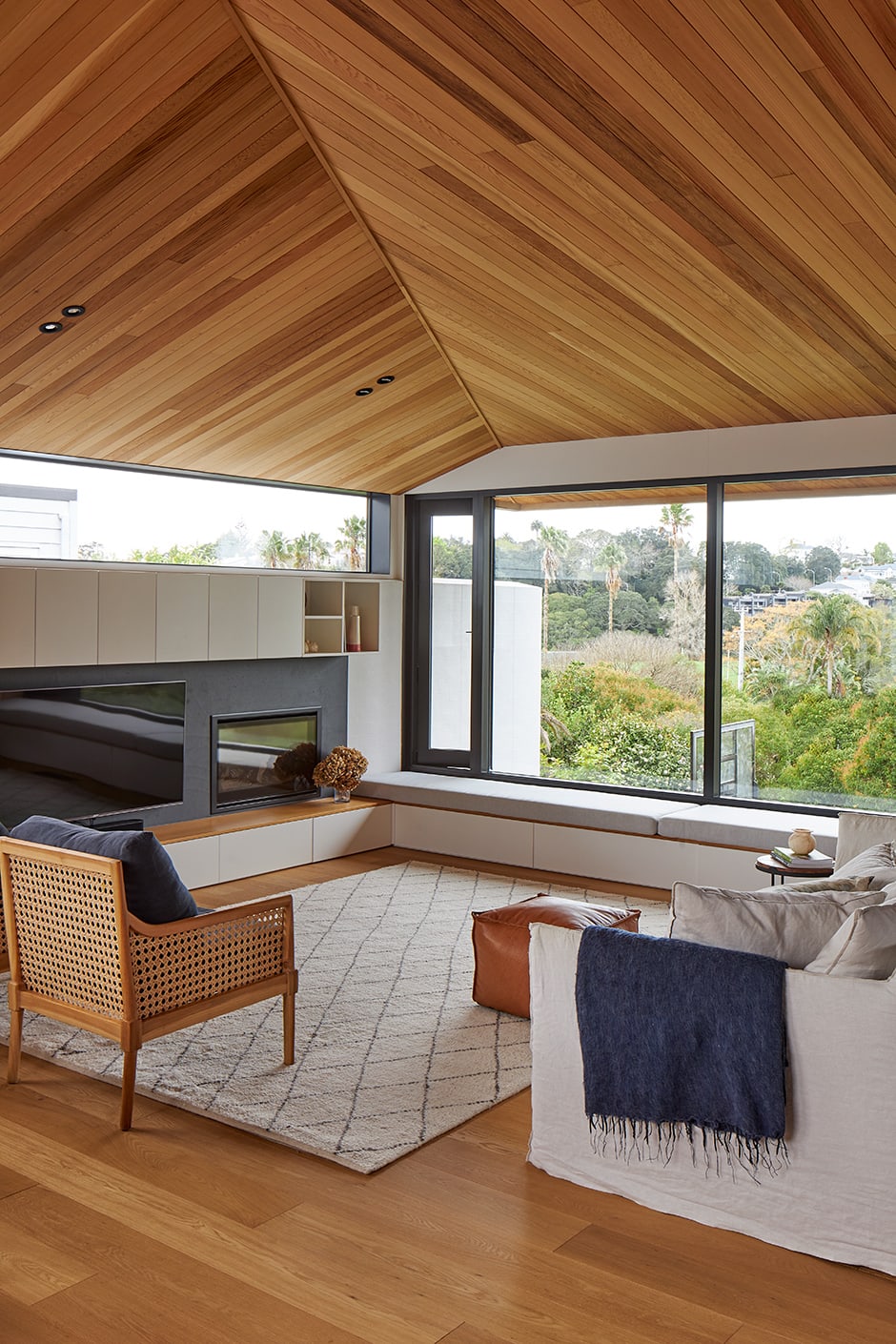 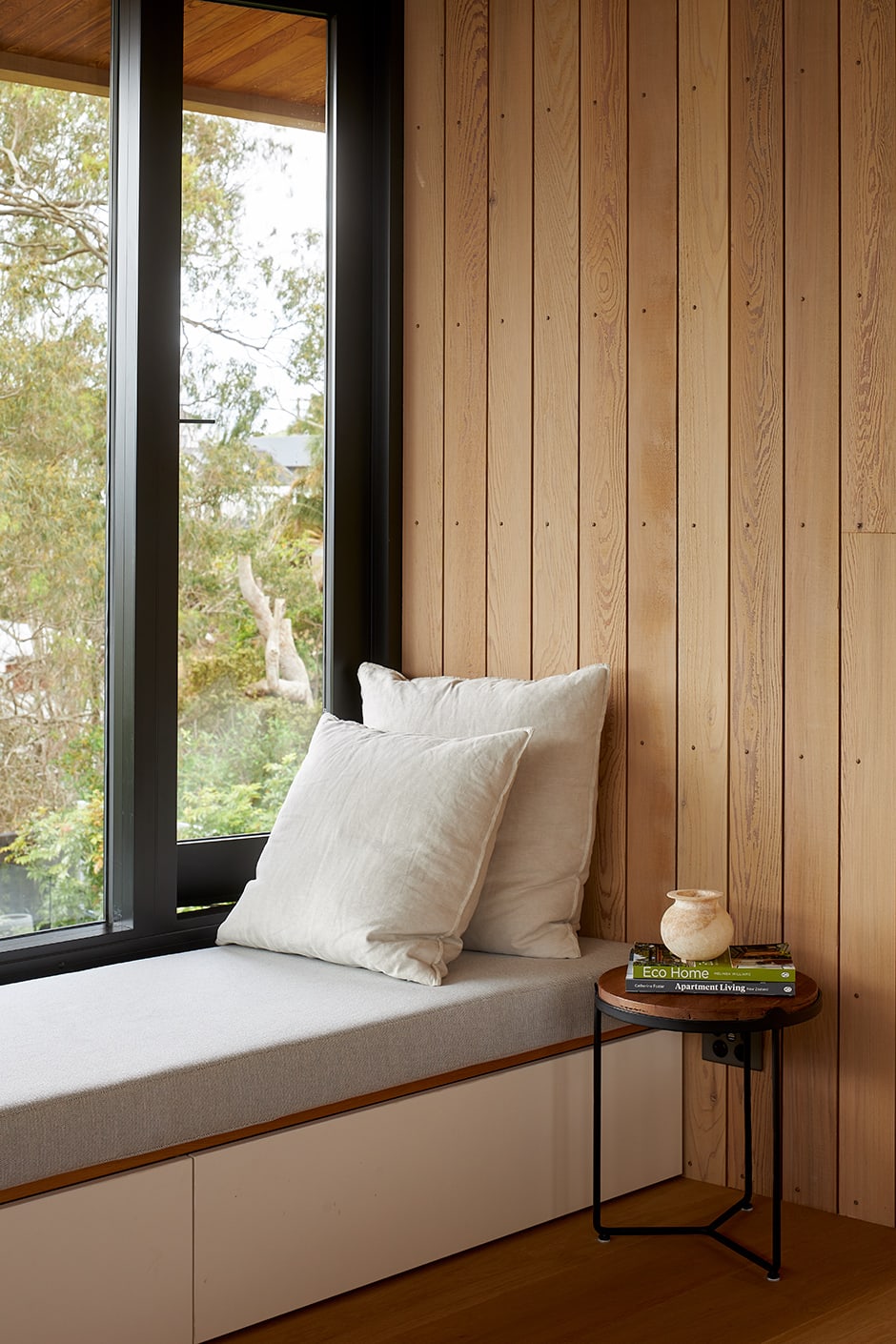 ABOVE Tim designs himself a seat in all his projects, and in this home it’s this bench below some more Metro Series windows and alongside the built-in TV/fire/display unit. Black anodised Elemental hardware was used on all the window openings as a minimalist intervention to the joinery profile.

Transitions between spaces were considered as carefully as the rooms themselves in this house, with the hallway given special attention so it became gallery-like. A row of high, north-facing windows from First Windows & Doors’ Metro Series opens electronically, casting pleasingly orderly shadows over the black tongue-and-groove panelling that conceals the guest bedroom, guest bathroom and laundry. 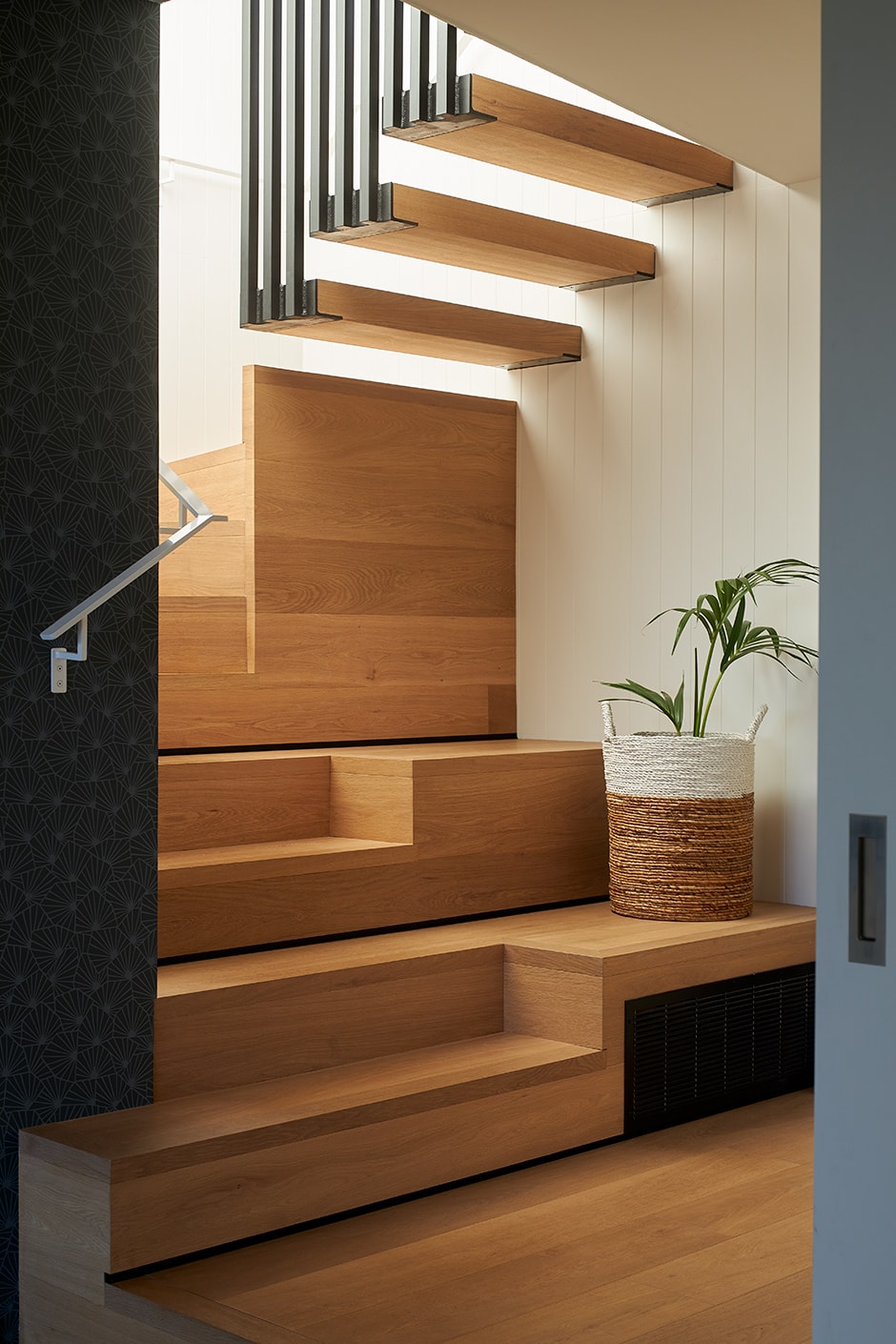 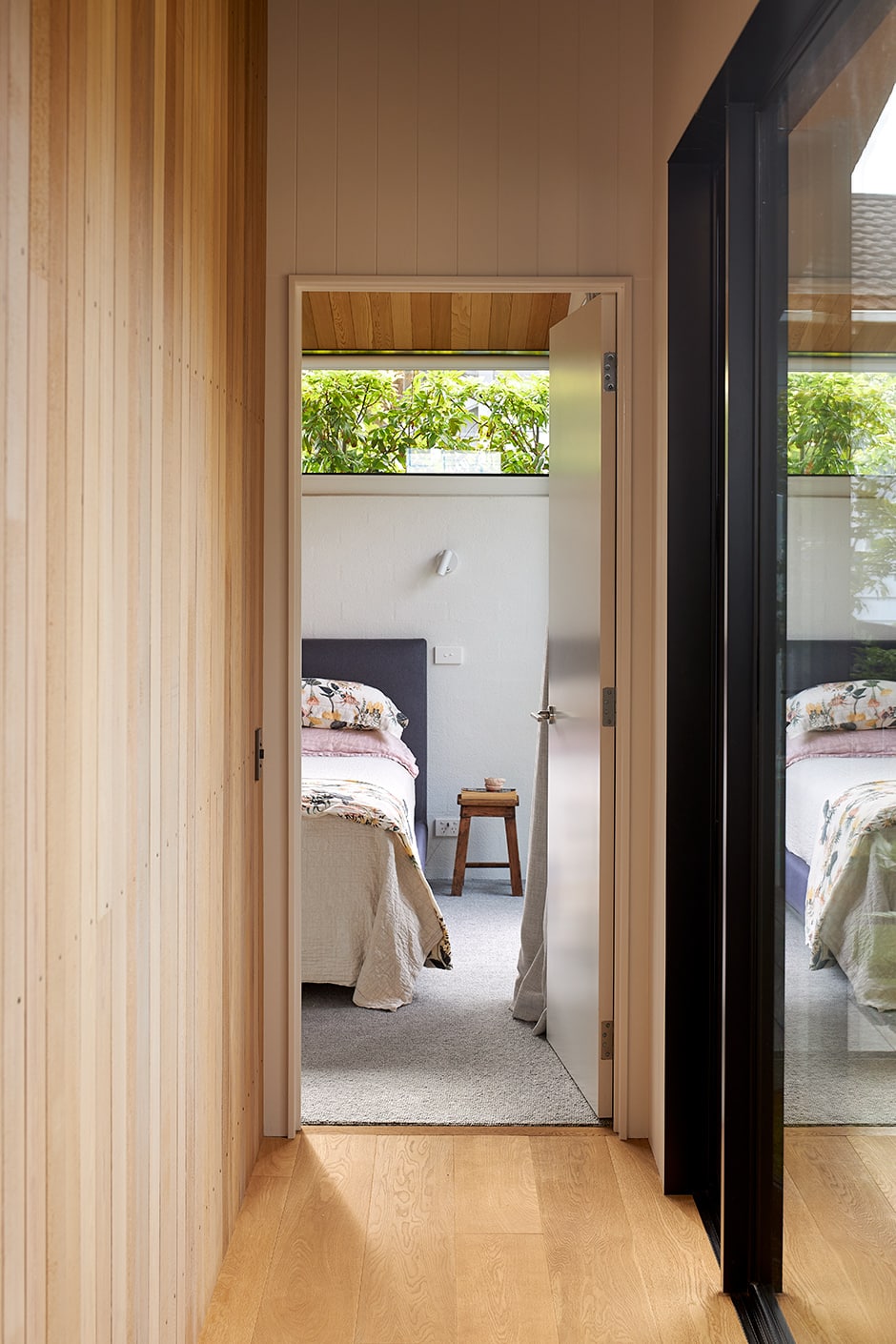 TOP Handy recesses beside the timber stairs leading down to the kids’ zone form places on which to perch plants and decorative objects. ABOVE A view towards Ginny and Dave’s haven, where another Residential Series clerestory window lets in a hint of green.

This black wedge of the hallway comes to an end in the dark-coloured kitchen, in which a splashback of mosaic tiles made from recycled computer parts adds a textural element to the minimalist scheme. The appliances are integrated, and a scullery is tucked out of sight to ensure the open-plan living spaces appear as uncluttered as possible. 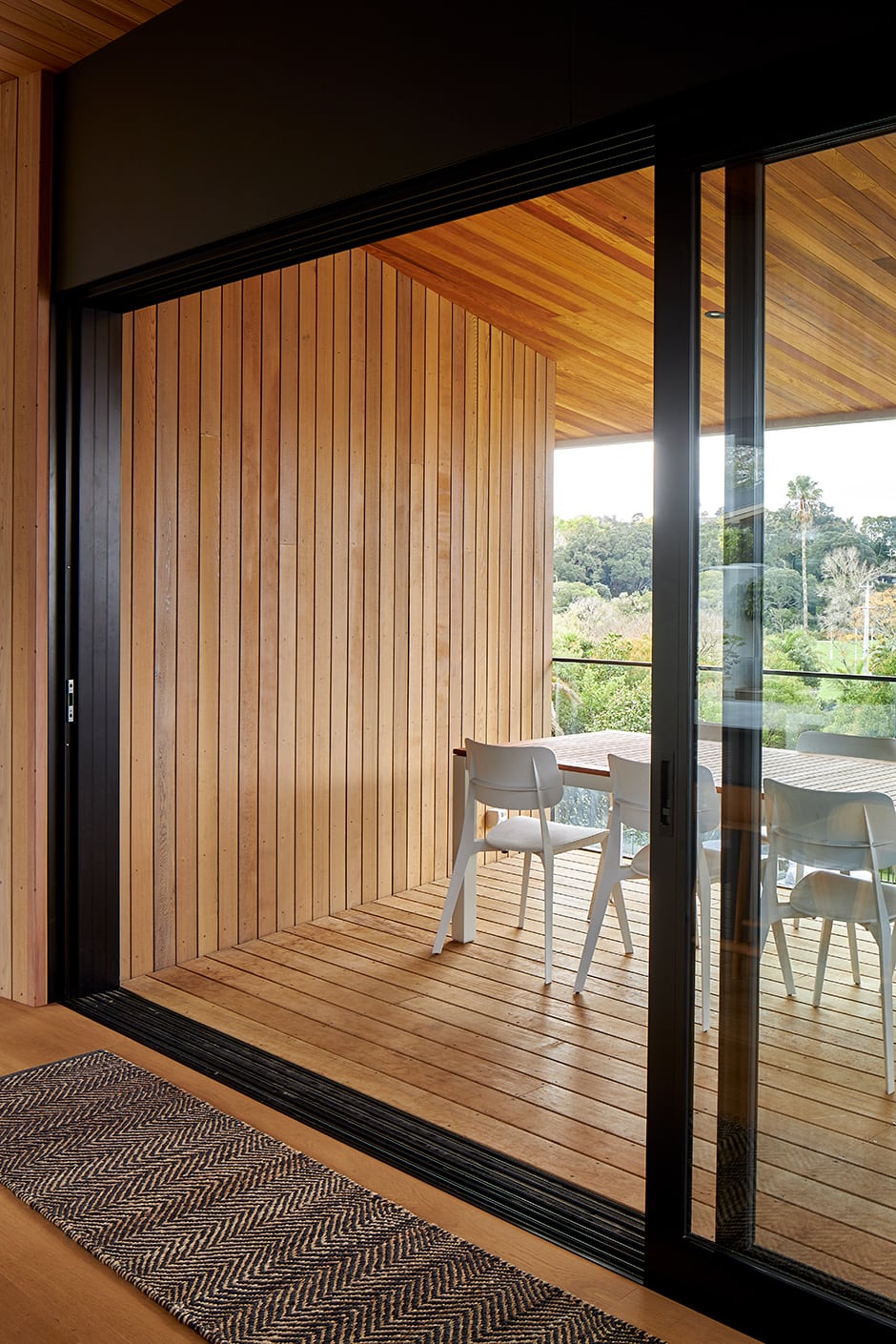 ABOVE The box-like cedar deck off the kitchen offers welcome shade in the height of summer and shelter on cooler nights when the family are entertaining outside.

Bagged brick was used on the living area’s north-facing wall for both practical and textural effect. “We wanted something solid here, as you’re about 2m away from the neighbouring house,” says Tim. “But we also limited the height of the wall to three-quarters and placed horizontal slot windows above the brick, so you get the feeling of space. Because the windows are full length, it almost feels like there’s no wall, and with the built-in [seating and other elements] surrounding the living zone, you barely notice the wall.” 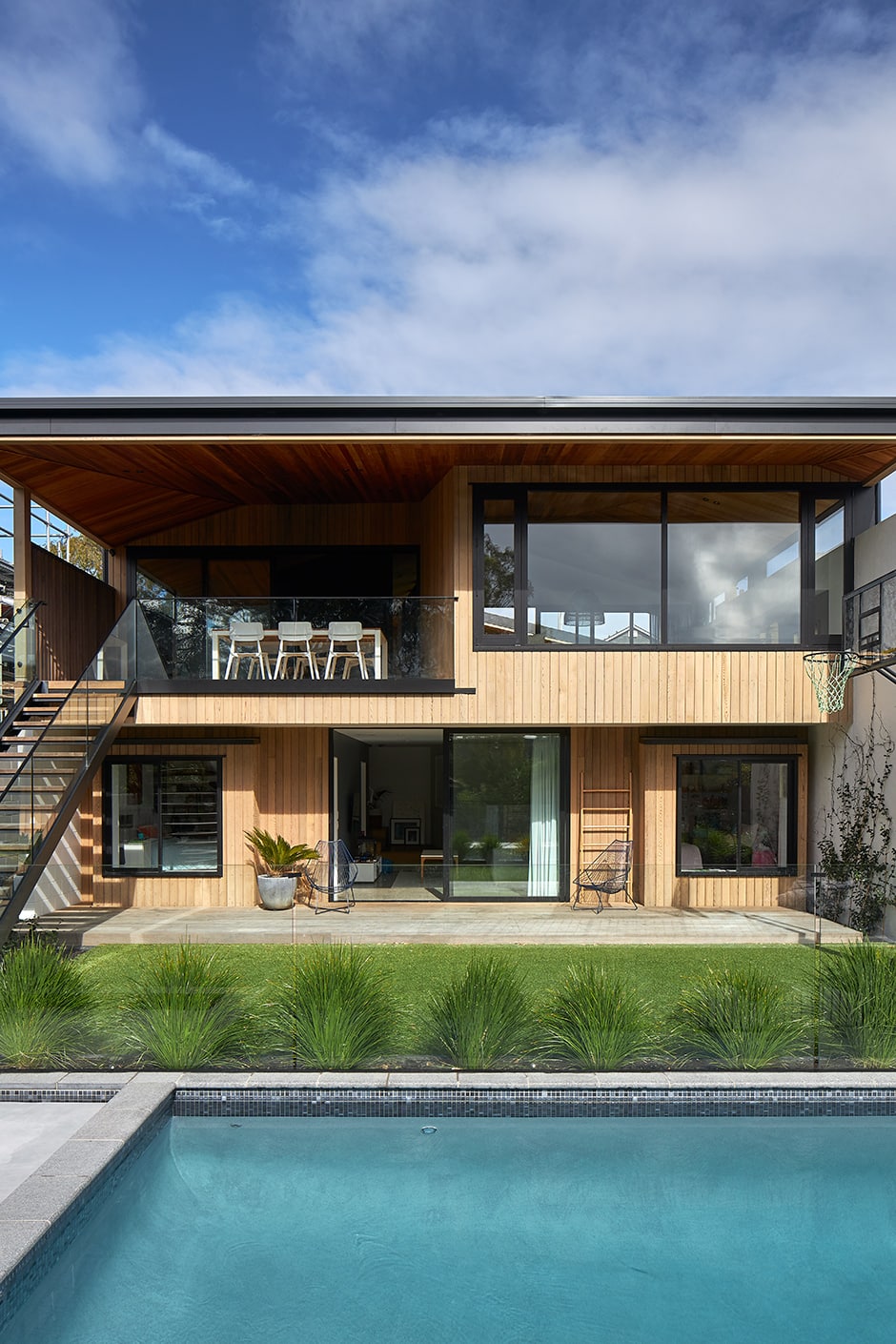 ABOVE “It’s sort of a ‘horses for courses’ thing,” says Tim. “We have the APL Architectural Series sliders, but we also have windows from Metro Series and some from Residential Series. They work well together, so we selected the suite to suit the particular opening we were trying to achieve.”

The vertical orientation of the home’s interior linings and the cedar-batten cladding on the exterior ensures a visually cohesive and succinct look, and adds detail to the angular walls ascending to vaulted cedar ceilings that accentuate the generous volume of the indoor and outdoor living spaces. These angles cleverly make these areas seem both bigger or smaller according to the ebb and flow of family life, providing spots in which to gather and others in which you can spirit yourself away to enjoy a sunny corner and a cuppa at any given time of the day.
Fit for life as the Openshaws know it right now, this is a home designed to accommodate the journey of raising a family. They’re not about to outgrow it anytime soon — their ‘stealth’ sanctuary that’s so much more than meets the eye.
firstwindows.co.nz

NextAll eyes are on this Waimairi Beach house