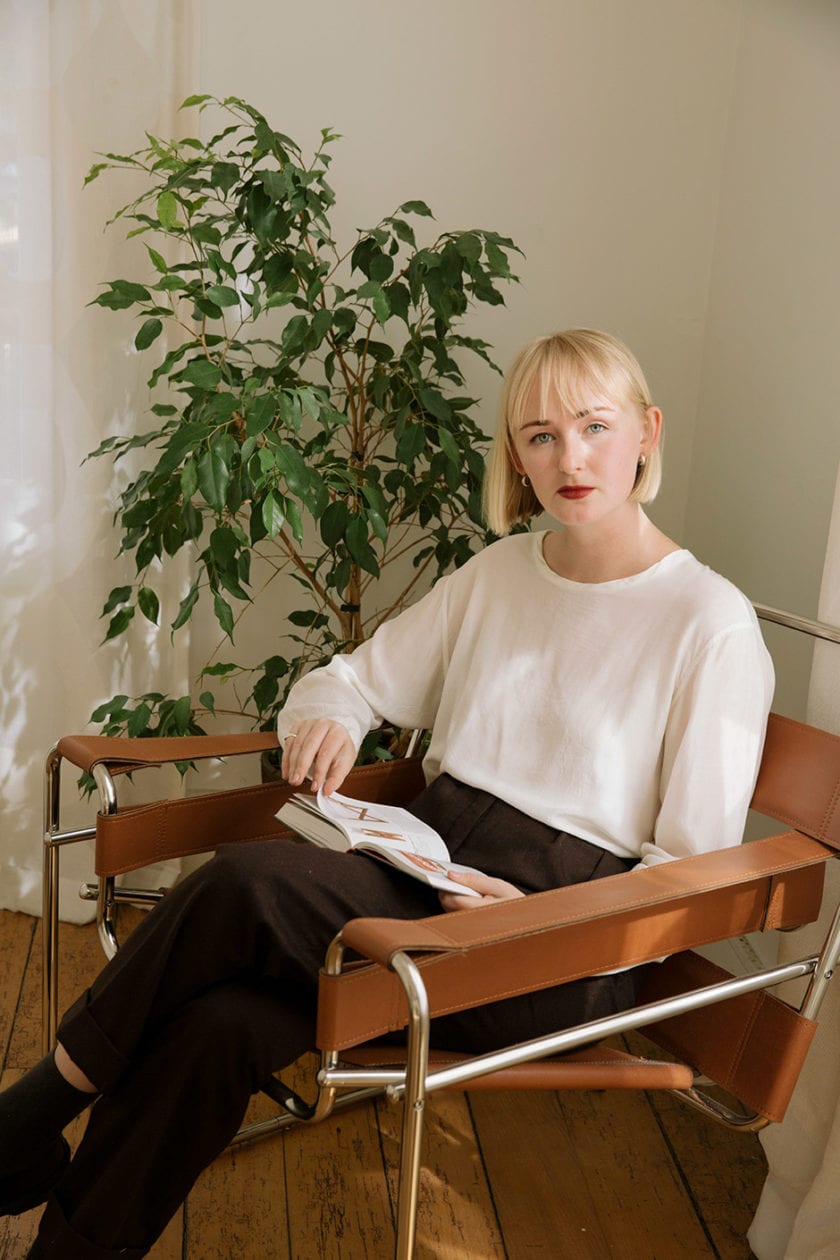 At home and work, Natasha Mead’s serene, contemplative aesthetic gently blurs boundaries in a celebration of design for the ages.

Graphic designer Natasha Mead jokes that she’s filled her Auckland cottage with a sanatorium-level amount of cream and beige, but it does make for a very calming abode. She’s lived here for about four years with her writer partner Alex Braae and their two flatmates.

So, Natasha, how would you describe this Freemans Bay haven? It’s very light and open, thanks to all the windows and the garden. It doesn’t feel like you’re in the inner city. It’s a beautiful house, but the external studio and garden were the biggest draw. Being surrounded by so much greenery keeps me grounded, and we love to eat in the garden in the warmer months. 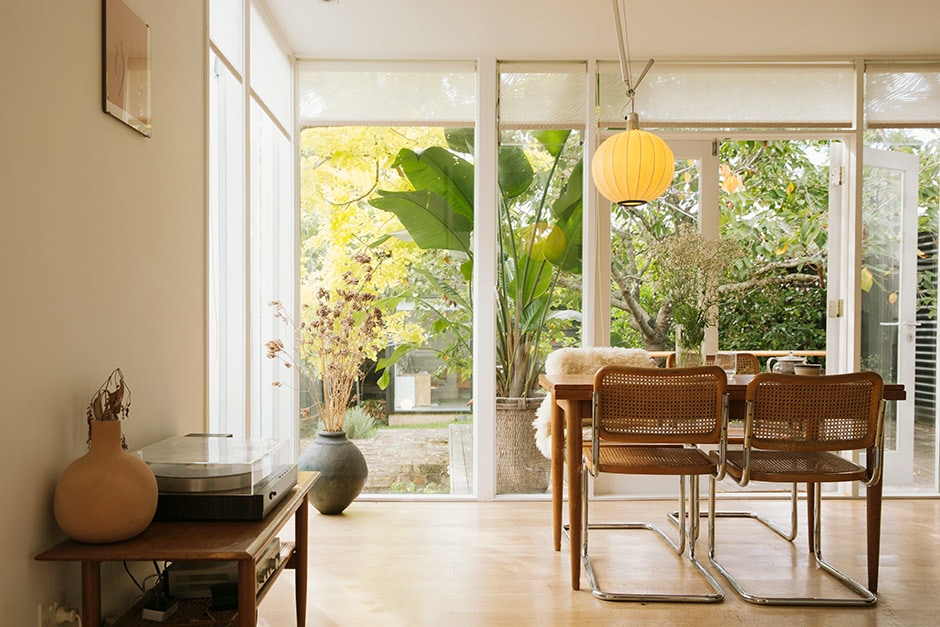 MAIN IMAGE Natasha bought this Wassily-style chair second-hand on Trade Me. ABOVE The cottage was built in 1910, but the kitchen/dining and deck area is a more recent extension; you can see where the timber flooring changes. The items that fill this space include (from top left) an artwork by Natasha’s artist/photographer friend Ophelia Mikkelson, a Micro Seiki record player, a large ceramic vase from Helter Skelter at Auckland’s Cross Street Market, a 1960s Airest dining table, 1928 Cesca chairs by Marcel Breuer and a mid-century Bubble shade by George Nelson on a lamp arm by Flos.

What do you like to surround yourself with to make you feel at home? People. Ours is a communal-cooking house, so on weeknights dinner is the cornerstone of my day. In terms of objects, it’s probably the things I use the most frequently that give me that feeling of contentment — the Moccamaster coffee maker, the blue-rimmed stoneware set that was my dad’s in the ’70s, and the 1960s dining table and 1928 Cesca chairs I’ve lugged from flat to flat. Most of the furniture we own is second-hand, partly because it’s from design eras I’m drawn to, and partly because it’s often better quality for the price. If it’s crafted and designed well enough to last this long, then I know it’ll last into the future too. Alex hates me changing things around, but he’s also pretty blind to anything visual, so it’s mainly about how subtly I can pull it off!

Do you think your interior style reflects your design aesthetic? In certain ways yes, because I naturally gravitate towards an aesthetic philosophy that spans disciplines. I think the main difference is that at work I’m not the client, so I’m able to push boundaries that I may be less likely to push in my own space. 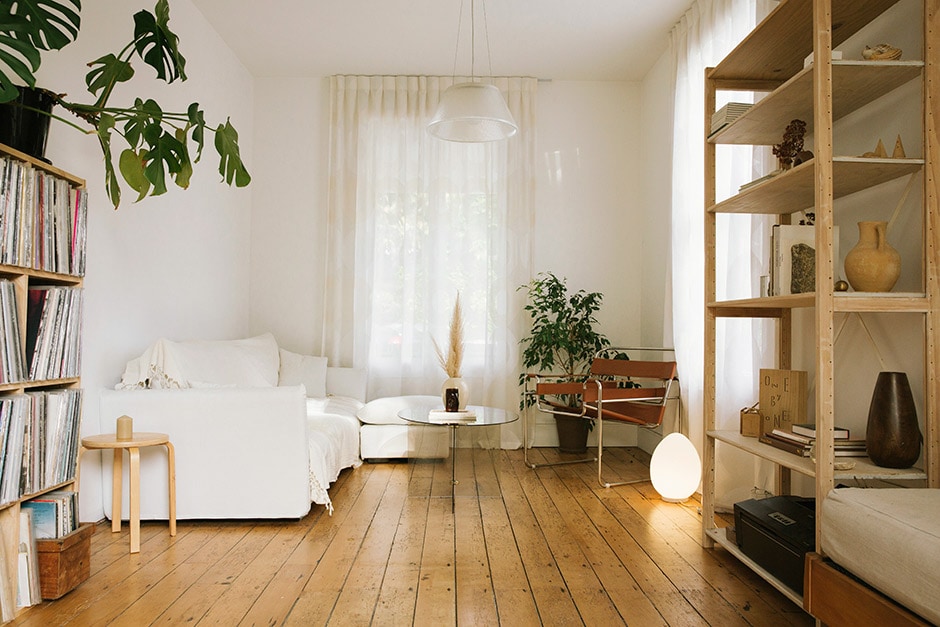 ABOVE Vintage shelving (left) and shelving by Lundia (right) leads into the living room, where a second-hand sofa and coffee table found on Trade Me join an Ikea stool, that fabulous leather chair and a 1970s Oeuf lamp by Ben Swildens from Babelogue. The Romeo Moon suspension lamps here and pictured opposite are by Philippe Starck for Flos.

Tell us about your agency, 1/1 Studio… I freelanced straight out of design school for about five years and discovered what I found most rewarding was working with clients as ongoing collaborative partners, rather than a more traditional straight ‘commission’ approach. Many of our clients have grown in the years since I started out, so establishing as a studio was a way of growing with them.
The studio set-up also allows me to do a broad range of work: branding, print, web design, development. I find working on projects from an initial concept through to both digital and tactile points very satisfying — it’s the creation of a fully realised visual world, centred around one idea or philosophy.
Working in a team with Joe Swann, Natalie Thomson and Patrick Daley is also a great way to have more perspectives. Ideas get built on and become more robust, and it stops any of us getting complacent; the others will notice if something’s half-baked. It allows for work that’s more refined and purposeful.
We’re still a small studio, though, which is the way I like it. Capitalism’s ‘expand or die’ mentality is nonsense and completely unsustainable. We have to define success for ourselves, and for me it’s the opportunity to do work I care about, with and for good people. 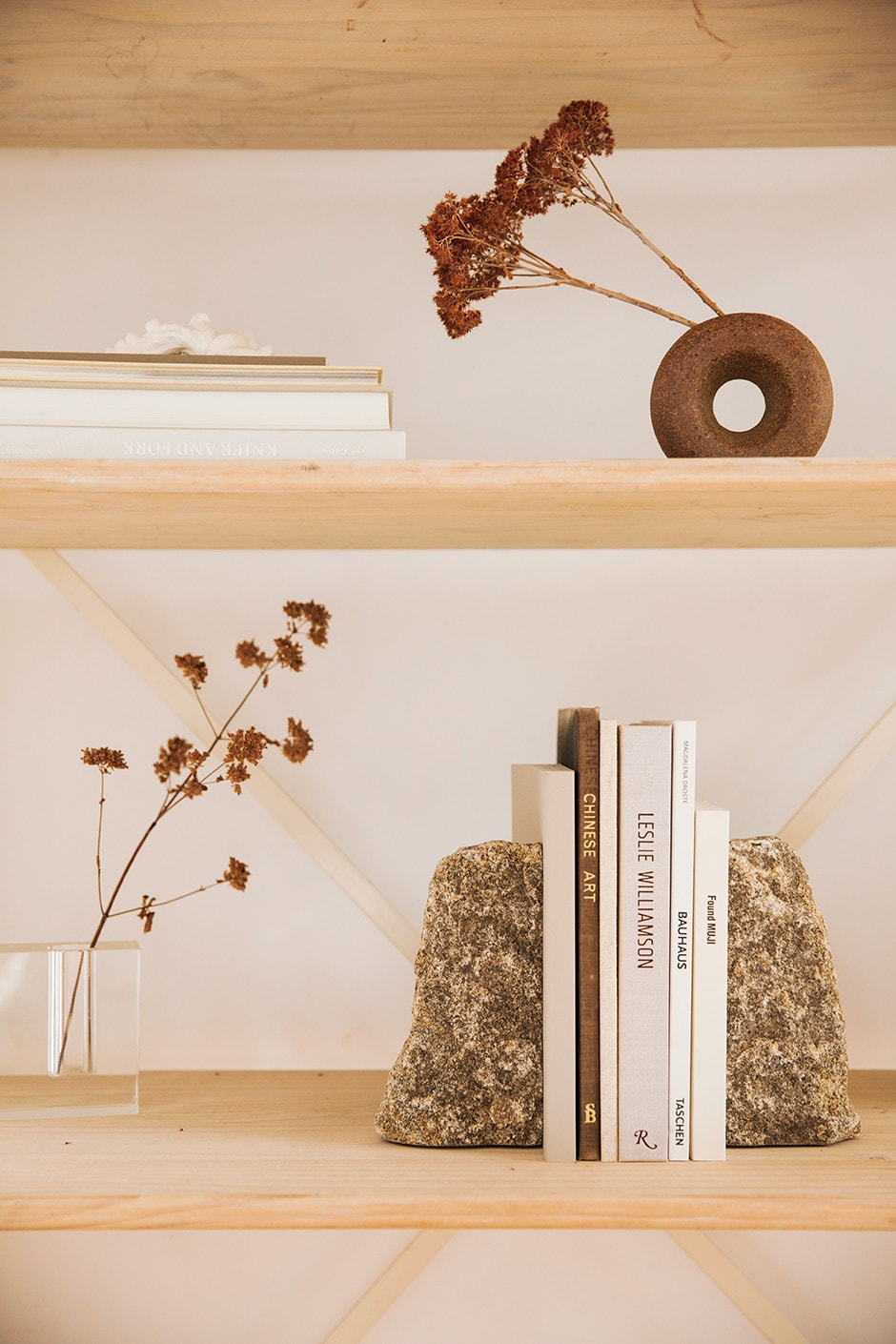 ABOVE Items in this peaceful little vignette include a vintage glass stem vase, stone bookends from Tortoise General Store and a Loop vase by Lucy Michel.

What projects do you find the most enjoyable to work on? ‘Enjoyable’ is probably not a metric I use very often to measure projects; sometimes a frustrating process yields a more satisfying end result, because it means we resolved something tricky.
In saying that, last year we designed a new nail polish collection for one of our long-time clients, LA-based J.Hannah Jewelry, which felt like one of those fake briefs you’d make up at university just for fun.

How do you find work-life balance when you’re your own boss? I try to keep fairly regular hours, which is another good thing about not freelancing anymore. I’m still trying to get that part right, though. I think balance is probably one of those things you just have to keep striving for, rather than something you can ‘achieve’ in perpetuity. 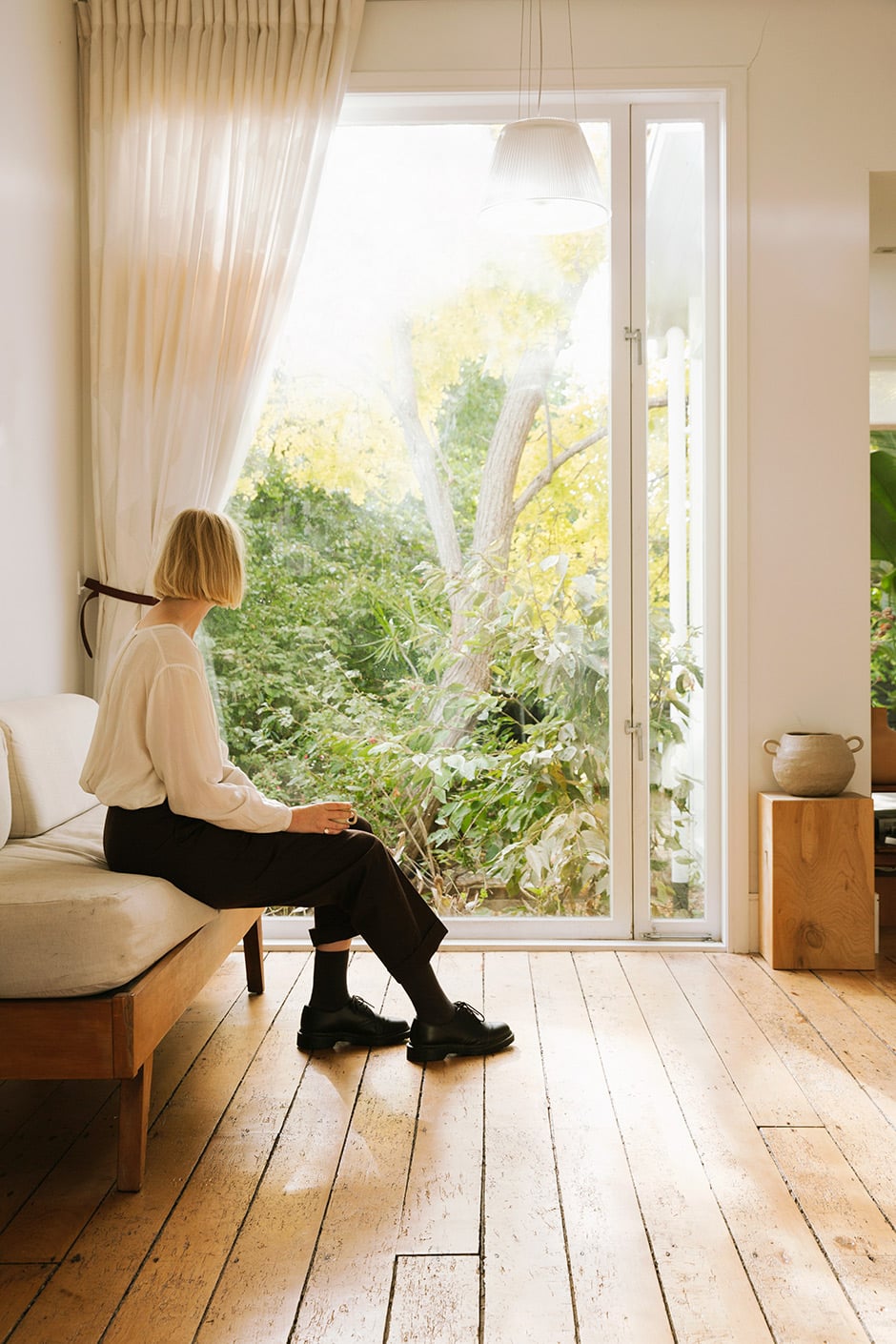 ABOVE Natasha says her home is where she exhales. She’s sitting on a vintage daybed also from Trade Me, opposite a timber pedestal that displays an urn by Holly Houston.

Do you have any daily rituals that help you get into the zone for work? I’d love to say meditating or journalling or something, but really it’s just a fixed start time and plenty of coffee.

Who are your design muses? I’m fascinated by architect and furniture designer Eileen Gray, who was a pioneer of the modernist movement. She didn’t get the credit she was due in her time, which I think makes her achievements all the more notable. I love the art of Agnes Martin. I read an article about her struggles with mental illness and schizophrenia, and learning that her interior world was so chaotic and art was a way for her to organise her own reality really moved me. Graphically, the work of Veronica Ditting, who designs The Gentlewoman among many other things, is second to none. I think she played a big part in paving the way for a lot of the typographically led editorial design we see today. 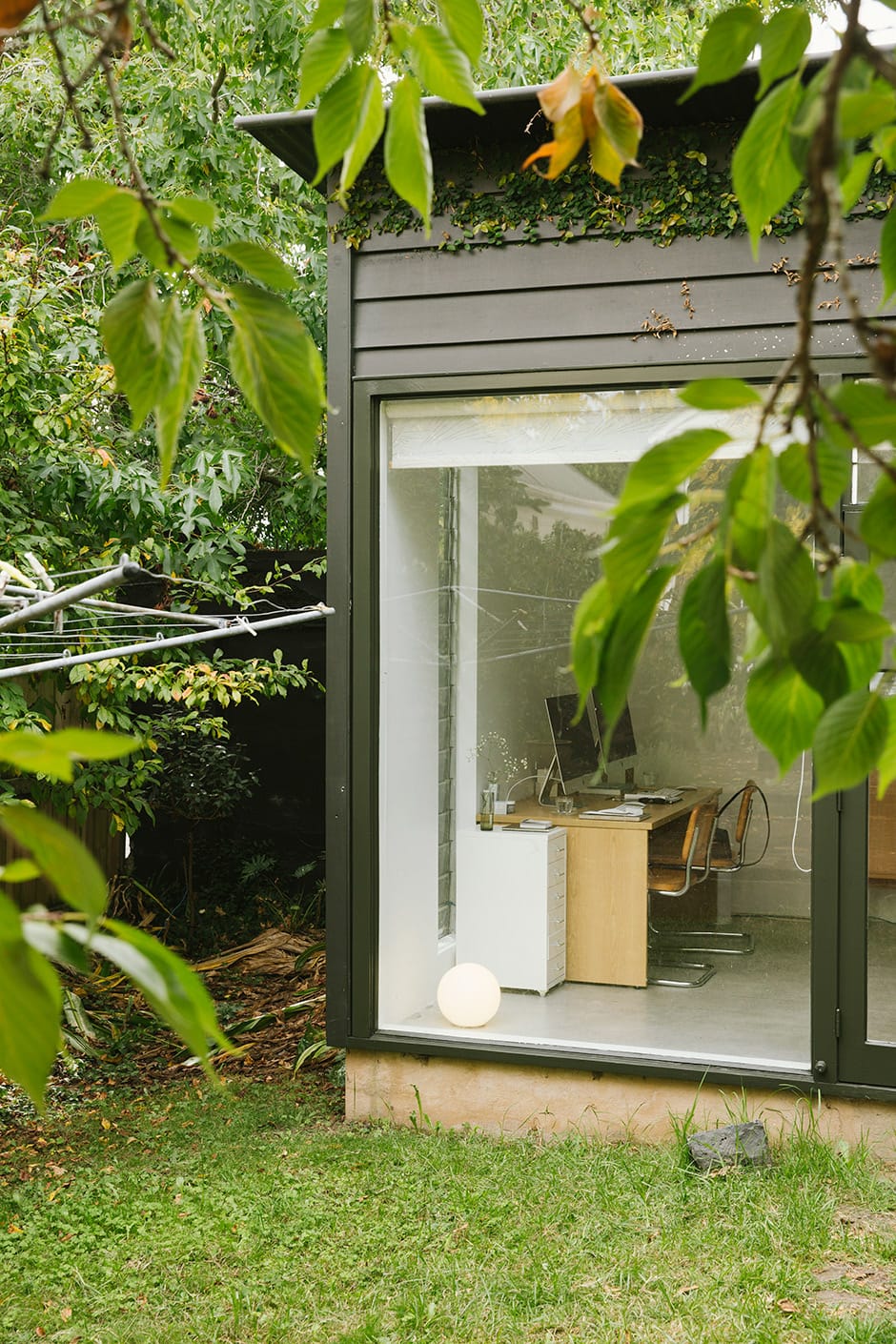 ABOVE “I used to think I was more productive in the evenings because I’d get really immersed, but then I realised that was because I was closing my inbox, not taking calls and just letting ideas draw me in,” says Natasha. “It made me recognise how important setting boundaries is.”

Do you ever look to architecture and interiors for inspiration? Definitely! There’s a shared language there with design, but I’m also ignorant enough to enjoy them on an instinctual level, rather than trying to assess precisely how or why something’s so good.
I did a tour of Le Corbusier’s Maison La Roche in Paris last year and loved how well thought out the use of colour and space is — that exploration around highlighting and suppressing with tonal shifts was, and still is, quite remarkable. I’m really inspired by that systems-based thinking — every detail and requirement is so carefully studied, and the end result is so utterly enduring. That’s definitely an approach I aspire to in my own design.
1of1studio.com