Thrills and spills on a North Shore renovation 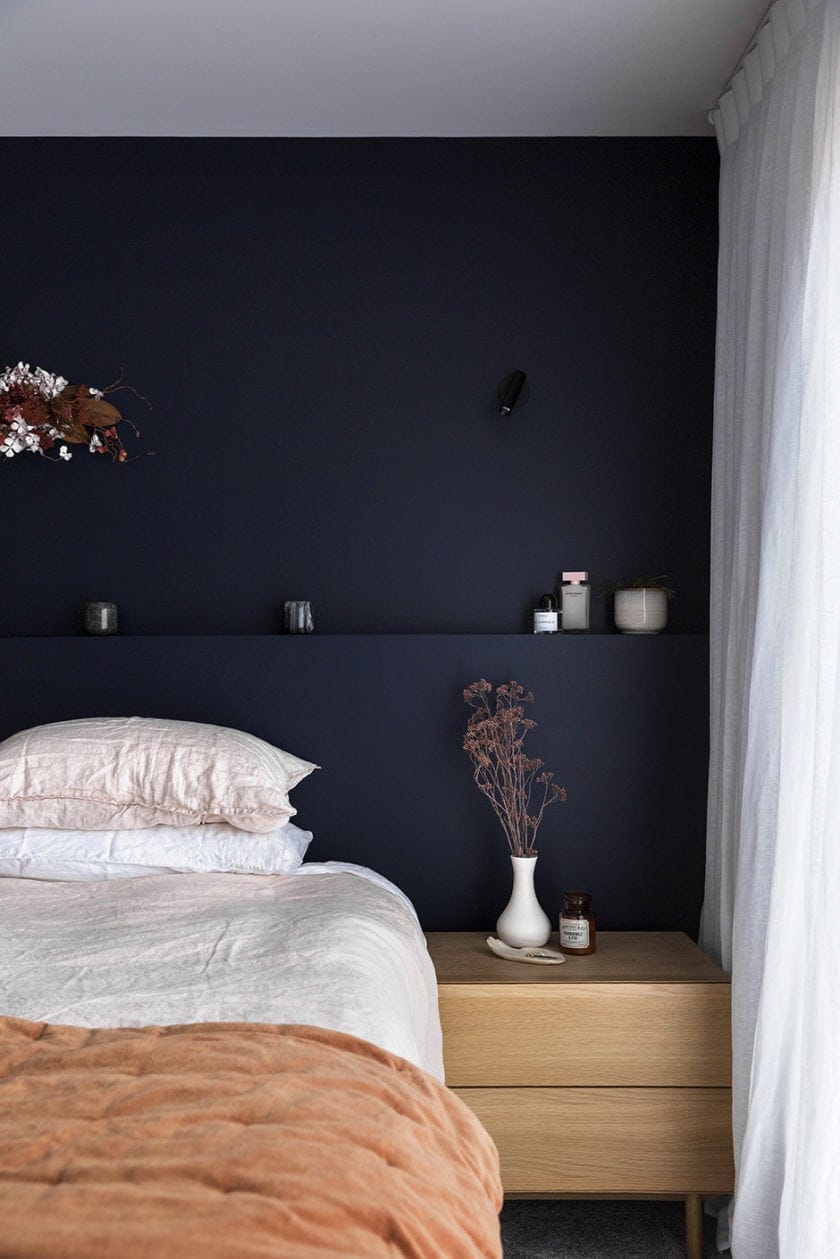 Home makeovers are notorious for their hiccups, but despite a rocky start, it all worked out for the very best at this Forrest Hill, Auckland home.

No one wants to hear a bump in the night, and when it’s accompanied by shakes, rattles and having to roll out of bed, it’s even less of a good sign. For the owners of this home, the adrenaline-pumping action turned a straight-forward renovation into a multi-year, two-stage one — but it wasn’t entirely unlucky. 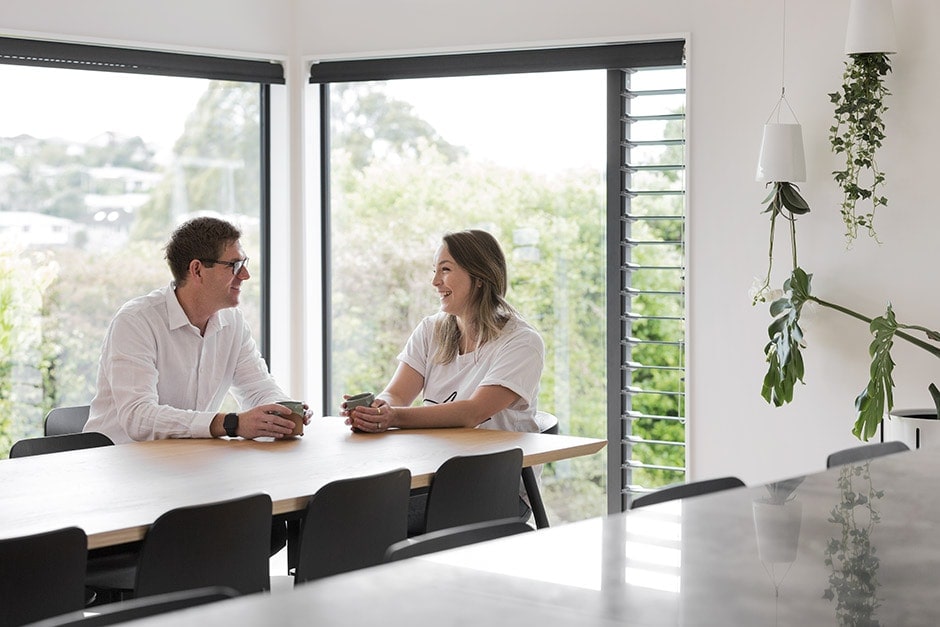 ABOVE Steve and Hannah in their dining area, where Sky planters by Boskke combine with a thriving Monstera deliciosa to form a living vignette.

High-school sweethearts Hannah and Steve Crump bought their Forrest Hill home on Auckland’s North Shore in 2011, taking a fortuitously timed risk and stepping onto the property ladder just after graduating from university. Built in 1989, the house boasted many hallmarks of the decade interior-style forgot, including pink carpets and a burgundy and lemon kitchen. Steve says youth, naiveté and stupidity allowed them to excitedly follow their big ideas, employing architect Mark Charleston of Buildology and builders Create Renovations to extend the footprint to allow for a statement entryway; pull down walls to create an open-plan kitchen/dining/living space connected to a new deck; reconfigure the bedrooms and bathrooms; and excavate underneath the home to make way for a living room, bedroom, bathroom, office, internal-access garage and lots of storage downstairs. 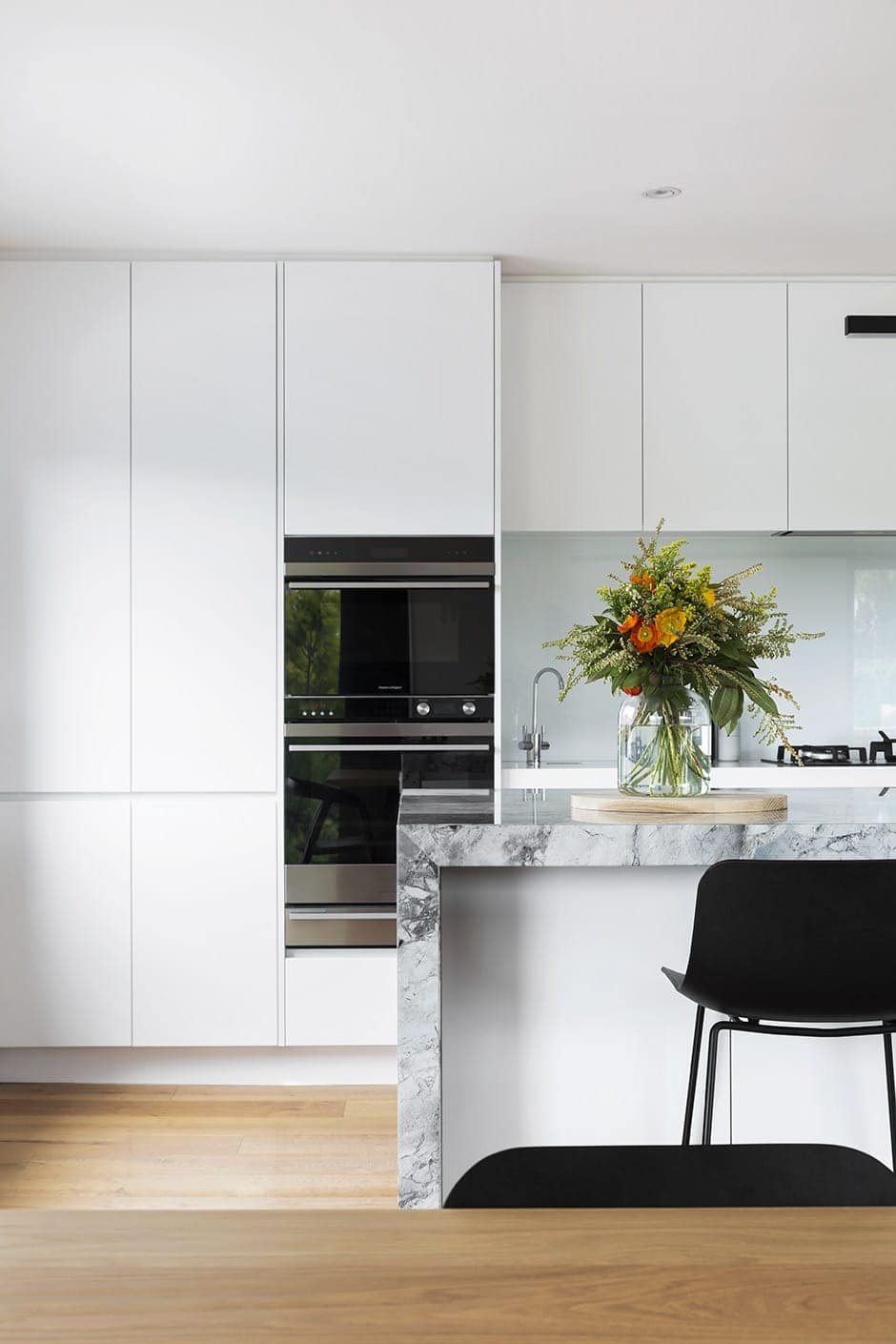 ABOVE When it came to the kitchen, the couple got by with a little help from their cabinetmaker friend Roy Lee of Finework Design, who helped them cut costs, effectively enabling them to pay for the Super White granite from PSP Stonecraft they had their hearts set on. They chose appliances by Fisher & Paykel and installed a corner Versatap by Schwan for hot and filtered cold water.

When the renovation began, the couple were living on site in the house supported on poles while the ground was dug out beneath it. Apart from claggy clay ending up in every nook and cranny, it was all going to plan, until…
A replacement for the old retaining wall at the side of the house was an essential part of the overhaul, but it was winter, and when the rains came, the mid-construction structure went slip-slidin’ away. “We woke up one night to a big bang,” says Hannah. “The whole house was rocking.” Evacuating at midnight to Steve’s parents’ place, they were forced to abandon ship for the rest of the renovation — and relocate their unimpressed moggies, Temperance and Solomon. “It all became very stressful at that point, but there was a little bit of luck involved,” says Hannah, who works as a buyer for footwear brands Mi Piaci and Merchant 1948.
“It could have all collapsed and the whole house would have rolled down the hill,” explains Steve. 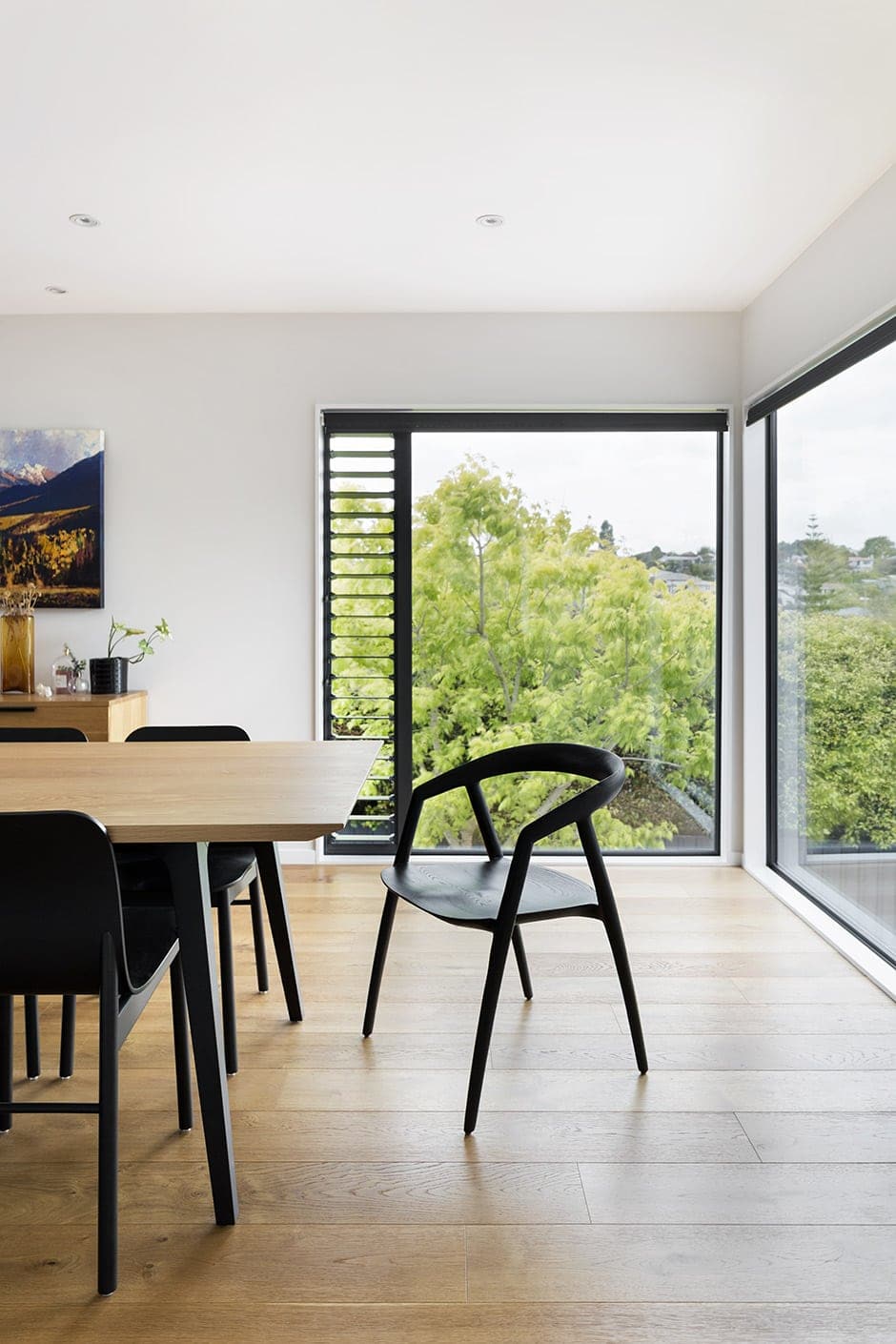 ABOVE Although shopping for homeware has become a regular pastime, Hannah and Steve are willing to hold off until they find the right piece, as they did with this Soul dining table by Nonn from Simon James, which they took more than a year to settle on. It’s teamed with Maki chairs by St Clements (one is pictured centre) and Aspen chairs by Città. The corner windows were part of the original home, but the couple replaced the existing configuration with two uninterrupted Nebulite panes with louvres on either side.

The mudslide was a disaster in many respects; however, the other upside was that the extra expense and time spent undoing the damage meant the project had to be broken into two phases. “At the time it was a big call to suspend the renovation, but it worked out to be a bit of a gem because we learned from the first stage and got to start again,” says safety consultant Steve, owner of Integrated Safety. 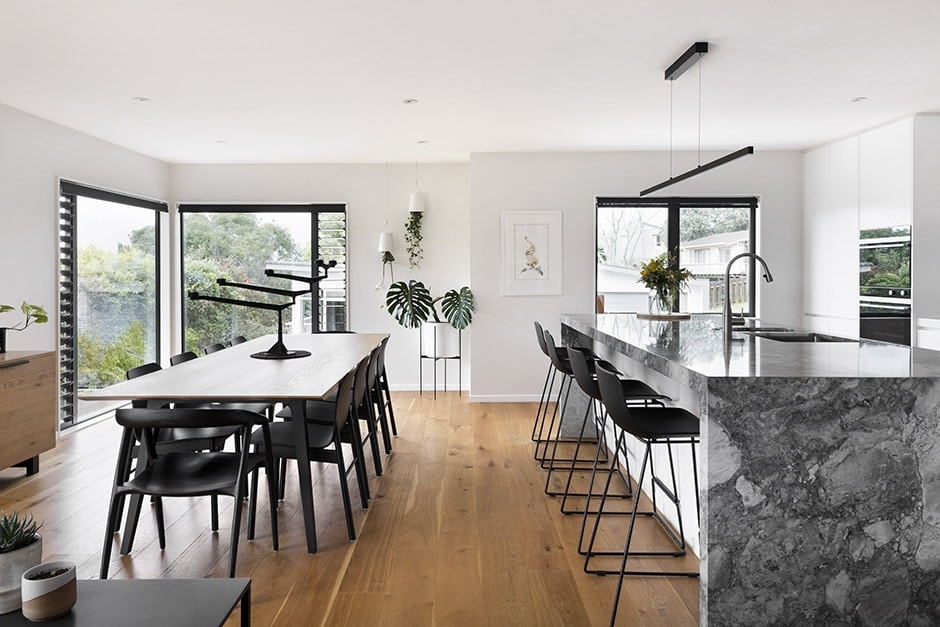 ABOVE Making a strong statement on the dining table is a Spin candelabra by Tom Dixon from Simon James. The granite island in the kitchen opposite is lit by a Lucca light from Light Plan. The Enzo bar stools are by Danske Møbler and the tap is by KWC.

“We probably spent twice what we originally planned to, most of it going into that wall, so we ended up not finishing the upstairs bedrooms and bathrooms because we ran out of money,” says Hannah. “If we had continued at that point, though, we would have ended up with a very different result, so it was actually quite good!” 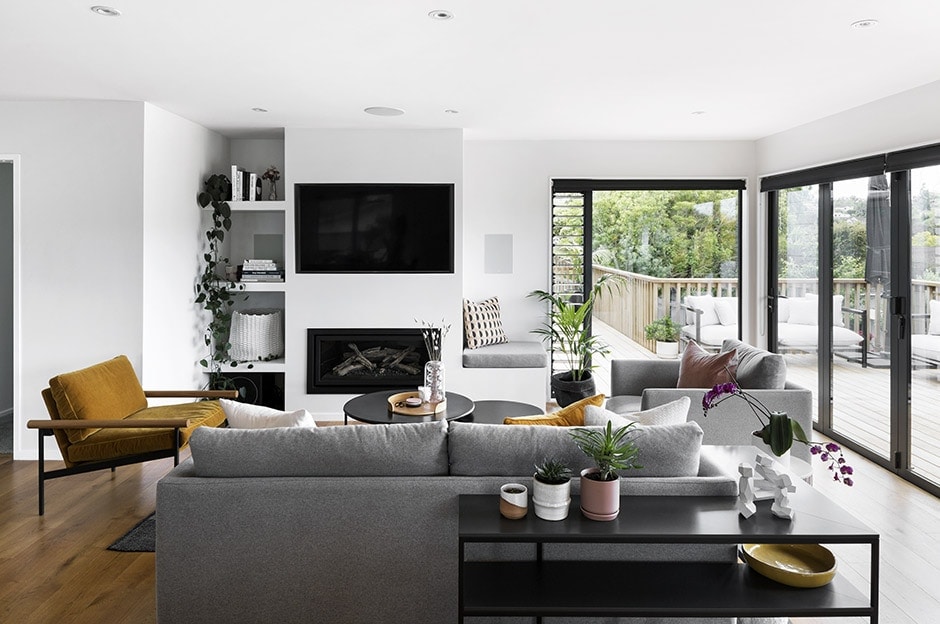 ABOVE Hannah and Steve sought to make their home more comfortable and functional, and the living area ticks both boxes. It captures the sun that now streams in all day, and is great for entertaining, allowing the cook to stay connected to guests hanging out in this adjacent space. The couple designed the built-in shelving and bench seat themselves to make a feature of the wall surrounding the Samsung TV and Regency gas fireplace. A Parallel Chair by Simon James in mustard Raf Simons fabric hints at the colour to come in the bedrooms off the hallway behind it.

Beginning again with builders Built Spaces after two years’ regrouping and saving up, the couple felt emboldened to be braver with colour for a striking, personalised finish in the remaining first-floor spaces. “We made more interesting choices in the second stage,” says Hannah. “In phase one, we’d never renovated before and were scared things were going to date. Then we realised that if we like something, it doesn’t really matter, and once we’d painted downstairs ourselves, we discovered it’s not that hard to paint over something if we decide we don’t like it anymore.”
Today, there’s no drama in this house, only delight. “Every part of it is something we made a decision on together, and that’s awesome,” says Steve. 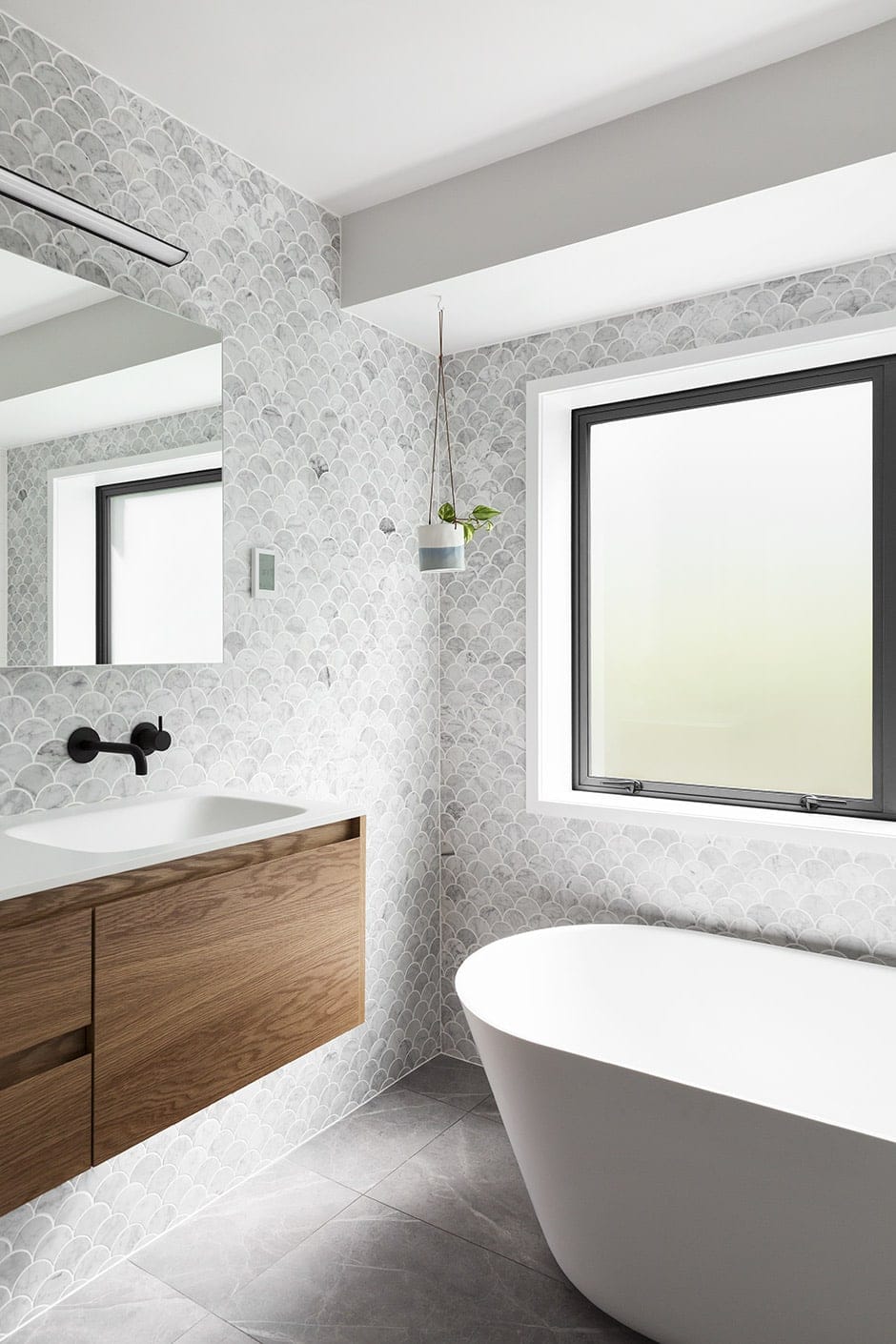 ABOVE Carrara fish-scale mosaic tiles make a statement on two walls in the main bathroom (also pictured opposite), and are complemented by matte white Silk tiles on the others and Marvel Grey Fleury tiles on the floor — all from Tile Space. The luxurious freestanding Niagra Ellipse 1680 bath is from Plumbline, as is the Stanza Legno vanity.

“The house very much suits our style and the way we live,” says Hannah. “We really enjoy sitting in the living area in the sun and being out on the deck in the summer, and love having friends over. We’ve always said we want to build a grand design one day, but I’d find it really hard to leave this now.” 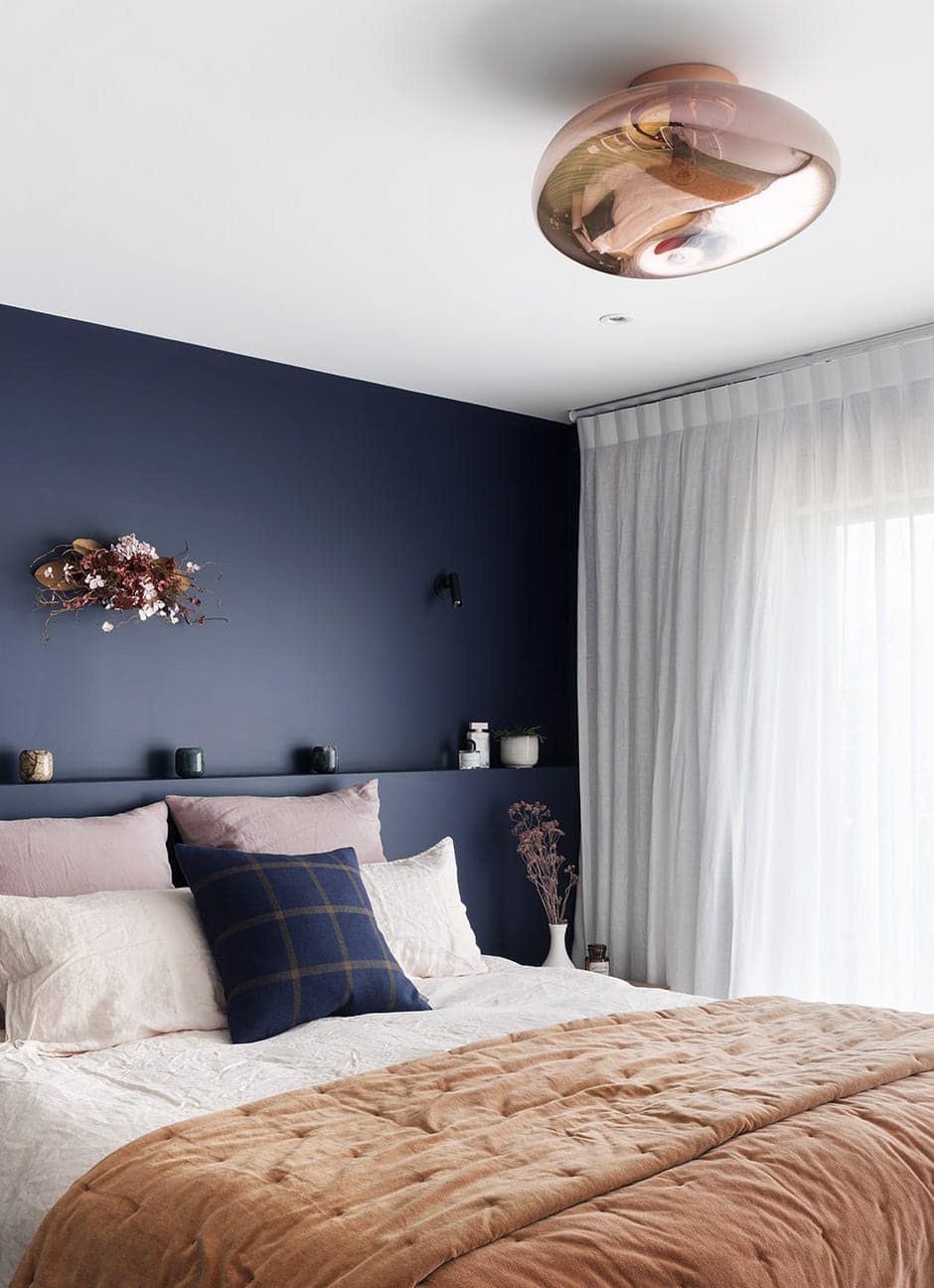 ABOVE Resene Indian Ink beautifies the walls in the couple’s bedroom, along with a dried floral arrangement by Mark Antonia. Diffused light filters through linen curtains from Freedom, a copper Melt light by Tom Dixon from ECC casts a warm glow overhead, and the bedside Bari spotlights are from Lighting Plus. Bedding from A&C Homestore teams with a bedspread and cushion from Città, while Materialism stone candles by Tom Dixon from Simon James decorate the ledge.

The moral of the story? “Don’t dig under your house! Don’t dig in winter! Just the basic fundamentals,” laughs Steve. 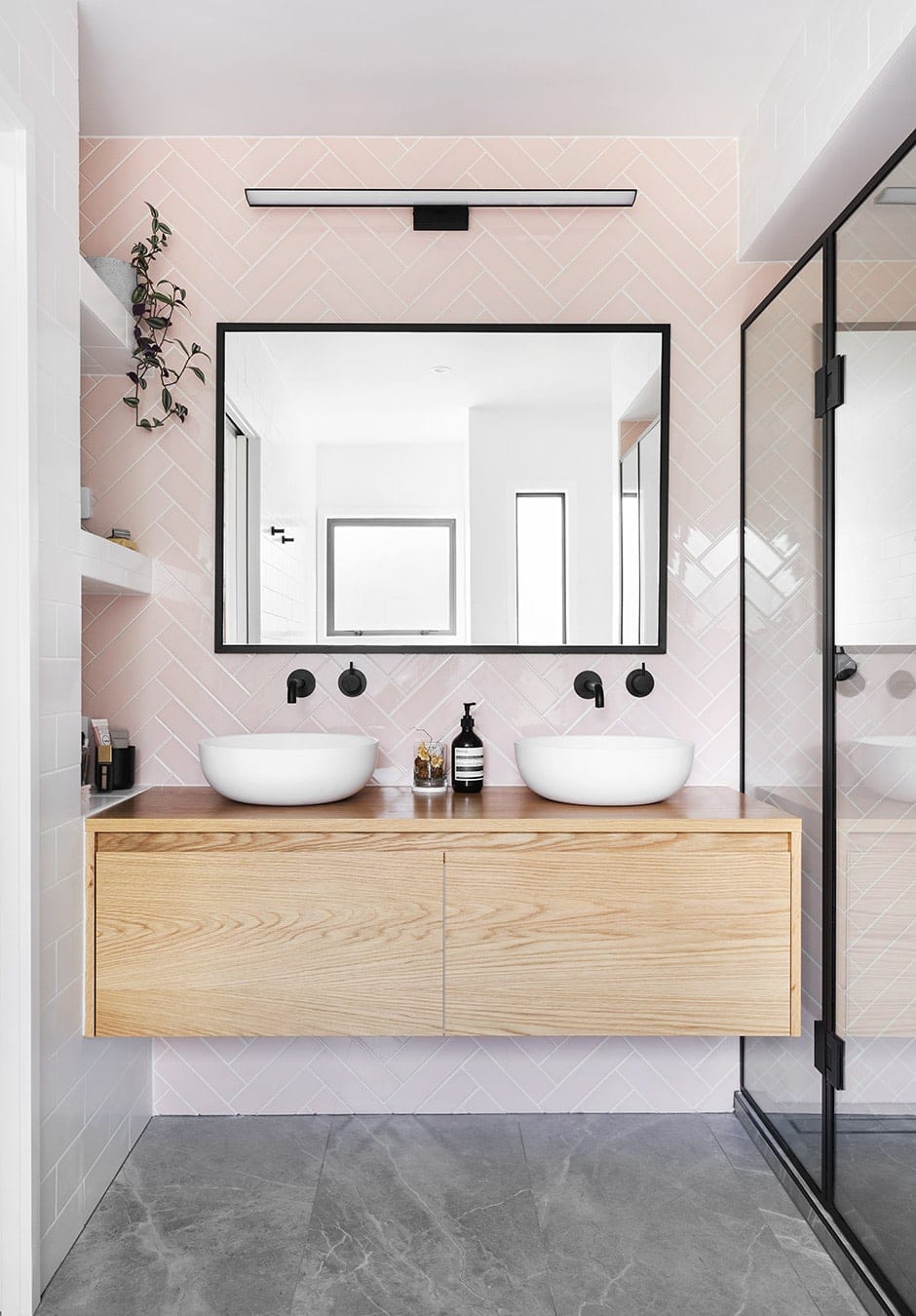 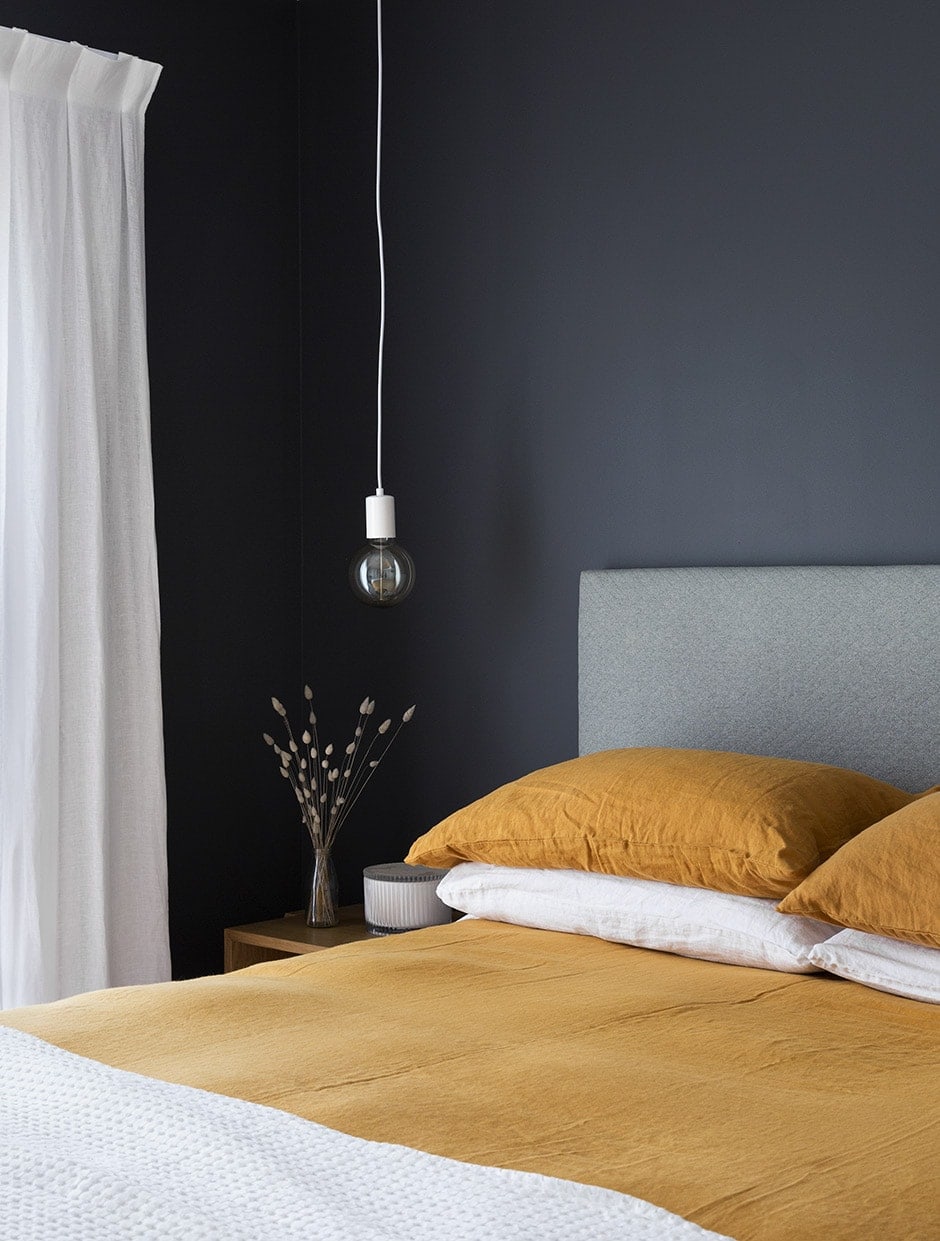 TOP Never mind the underfloor heating — the his-and-hers Niagra Round vessel basins, Buddy tapware (all from Plumbline) and in-ceiling rain heads by Hot Bath are the couple’s favourite things in their ensuite, making getting ready together in the mornings ultra-easy. The Tabiano vanity lights throughout the house are from Lighting Direct. ABOVE This upstairs guest room features walls in Dulux Waitara Beach, industrial-style lights from Lighting Plus, bedside tables from Flux Boutique, a headboard from Freedom and a duvet cover set from Città.