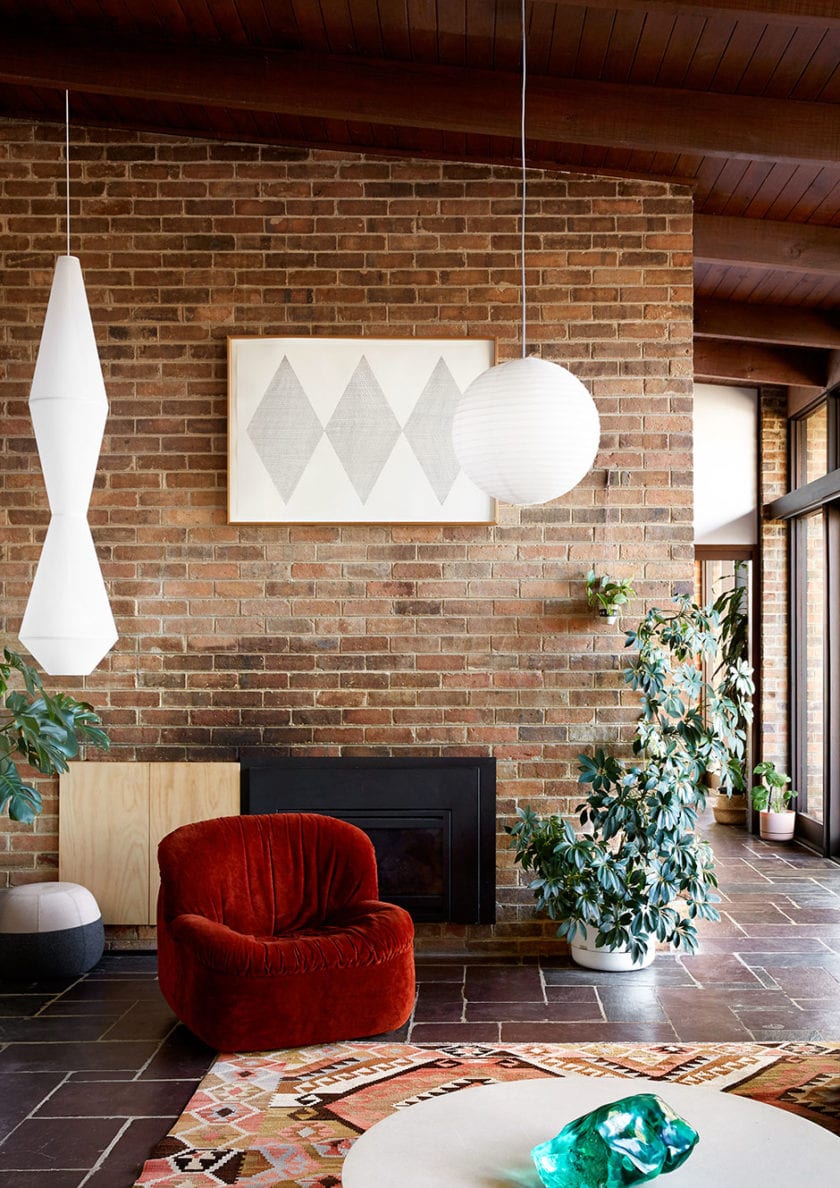 There’s something extra special about this property in Melbourne’s leafy north.

From time to time, a magical golden-furred fox comes to visit Kate Stokes and her husband Haslett Grounds’ garden on the outskirts of Melbourne. Between the tinkling birdsong and bewitching light, it’s just one of many enchanting things about this place.
A magnificent original piece of modernist architecture, the couple’s 1966 home is the work of late Australian designer, builder and landscape architect Alistair Knox, and a stellar example of his iconic style. Kate and Haslett became its lucky third owners in 2017, after their Melbourne journey thus far — 10 years, five rental properties, two kids (Mariko and Juniper), one furniture and lighting design studio (Coco Flip) and an architecture practice (Grounds Architecture) — led them to seek a more permanent base. Realising they simply couldn’t afford to buy what they needed for their young family in the inner-city suburbs they’d previously called home, they began to ponder other possibilities, and not long after found this absolute charmer in Eltham, 25km north of the CBD. 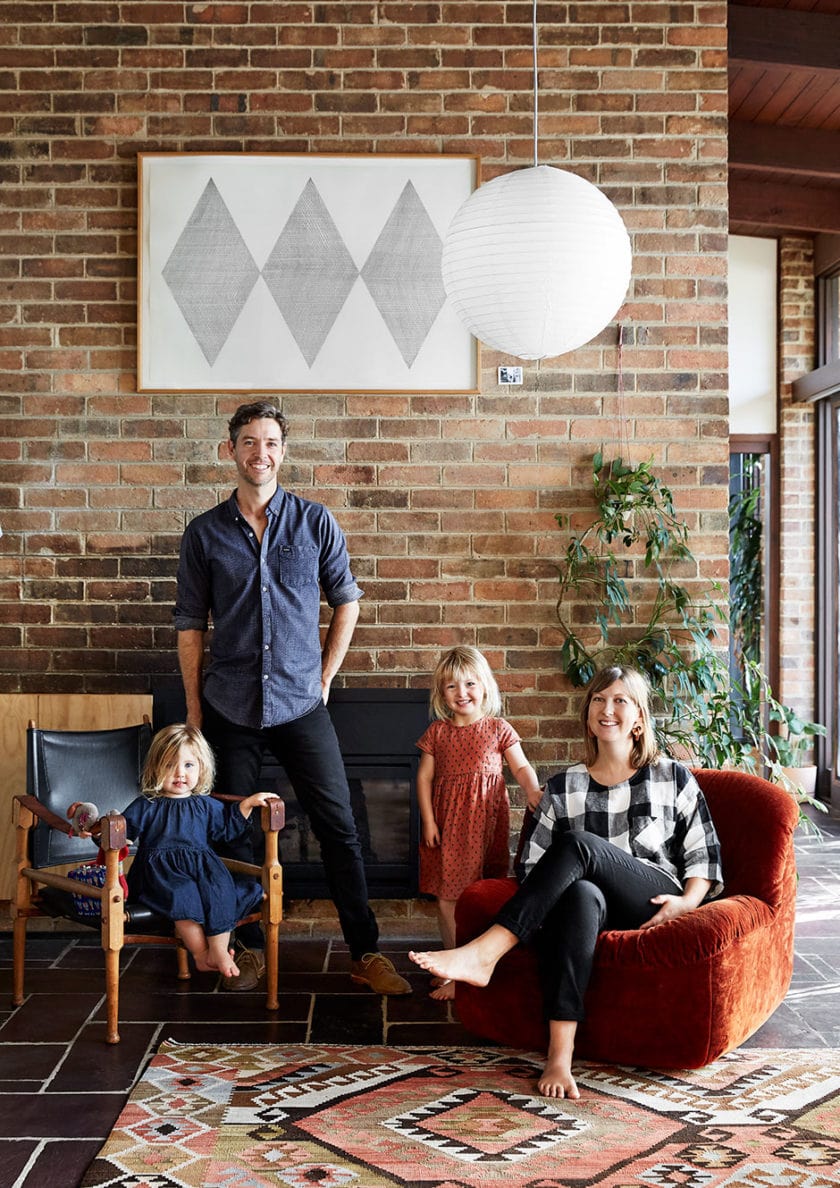 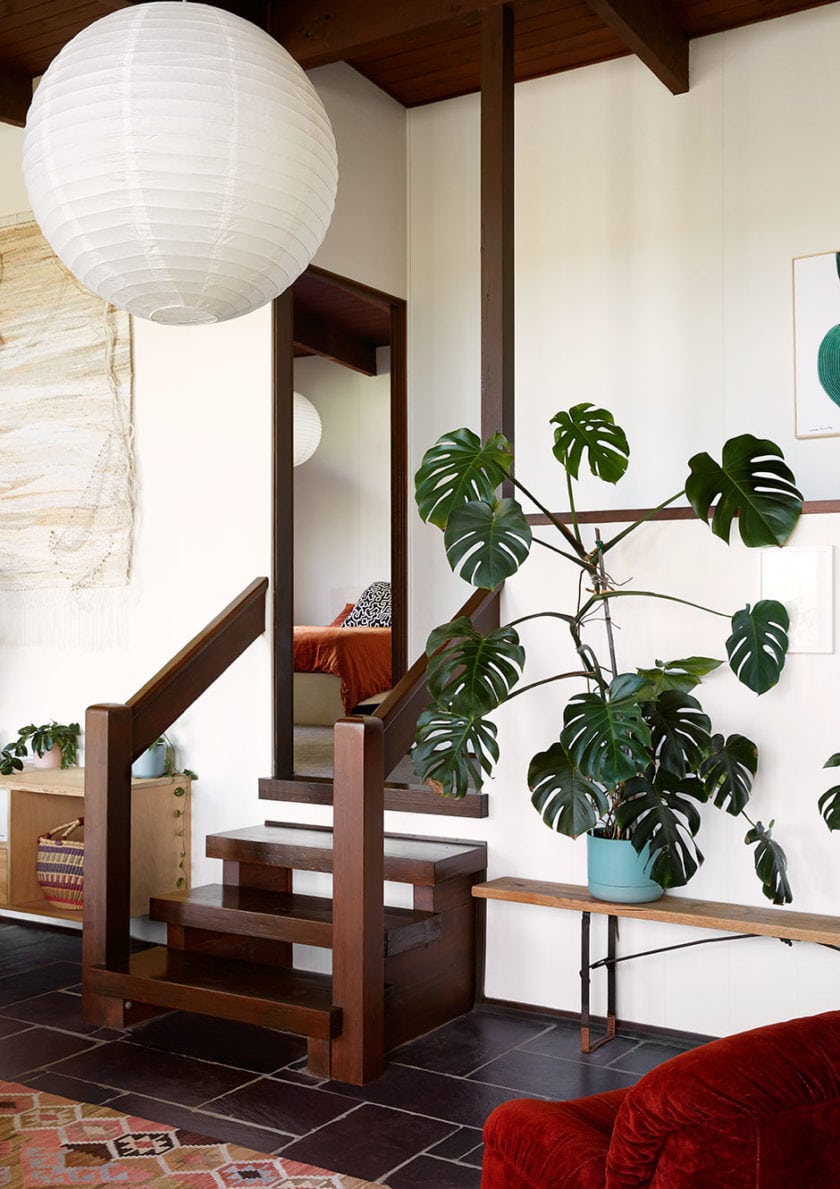 TOP “The heart of our home is the main living space,” says Kate, who bought the retro tub chair she’s sitting on from Instagram store @ccss_tm.“It feels so good to be in, especially in the cooler months when the gas fireplace is on.” The paper lanterns throughout the house were there when the couple bought it and are such a low-key classic they see no reason to replace them. “The soft glow is perfect for living areas and bedrooms, and their simplicity balances the house’s multiple textures well,” says Kate. ABOVE The split-level aspect is another of Kate’s favourite features.“The kids like to stand at the top of the stairs and put on performances on their ‘stage’,” she says.

The home is a triumph of Alistair’s trademarks: timber, Hawthorn bricks, slate and lots of glass. He was a prolific builder known for his use of recycled materials and mud bricks, and a pioneer of the latter. “Eltham is dotted with his houses,” says Kate. “Our home’s high, slanted ceilings with exposed timber beams are also recognisably his, as is the split-level layout that suits the slope of our block so well.”
The floor plan has a circular flow that in combination with this split-level design (which creates a subtle divide between the downstairs living areas and upstairs bedrooms and bathrooms) allows the rooms to feel separate yet connected. The external walls of the communal spaces are almost entirely sliding timber and glass doors. 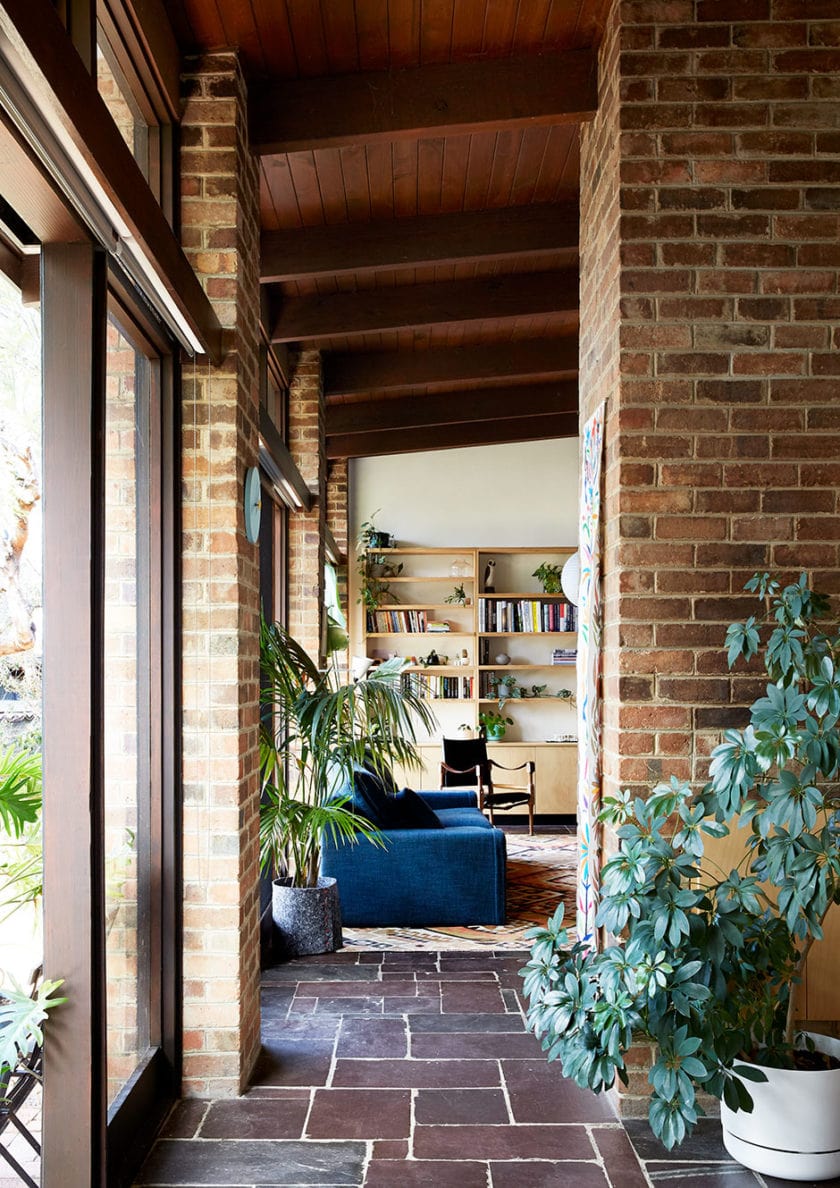 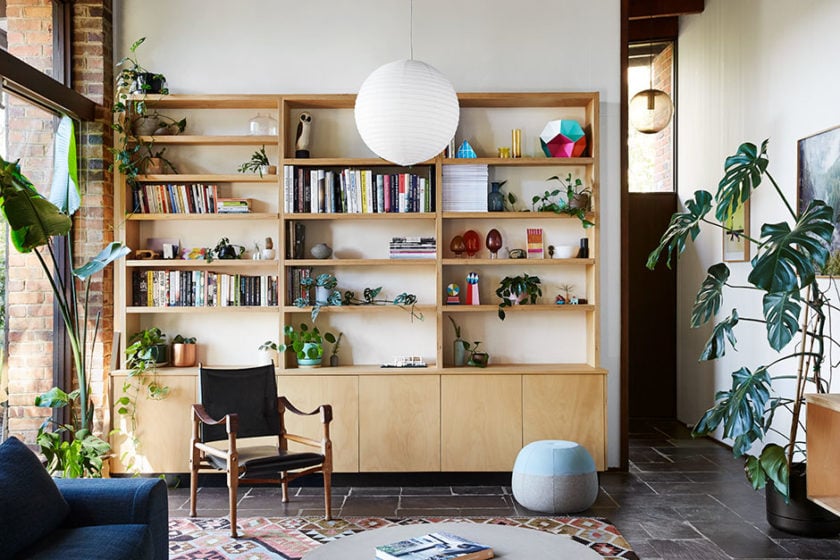 TOP Designer Alistair Knox is best known for his use of mud bricks, but these Hawthorne bricks are also a signature and are complemented here by Welsh slate flooring. ABOVE “We’ve had our huge kilim rug from Loom for years and it fits into this living space as though it was made for it,” marvels Kate. The striking leather Safari chair was designed by Michael Hirst in the ’60s and once belonged to Haslett’s grandparents.

“What struck me when I first walked in was the spaciousness of the rooms,” says Kate. “The soaring ceilings and floor-to-ceiling glass create a beautifully open feeling. All that glass makes the most of the green outlook, and the light that pours in is just magic.”
Kate and Haslett were so excited when they moved in that they unpacked every single box within two days. Miraculously, “there seemed to be a spot for everything,” says Kate. “It felt like home from that first weekend. On the first few mornings, I really had to pinch myself. The light is gorgeous and waking up to the birds feels incredibly special.” 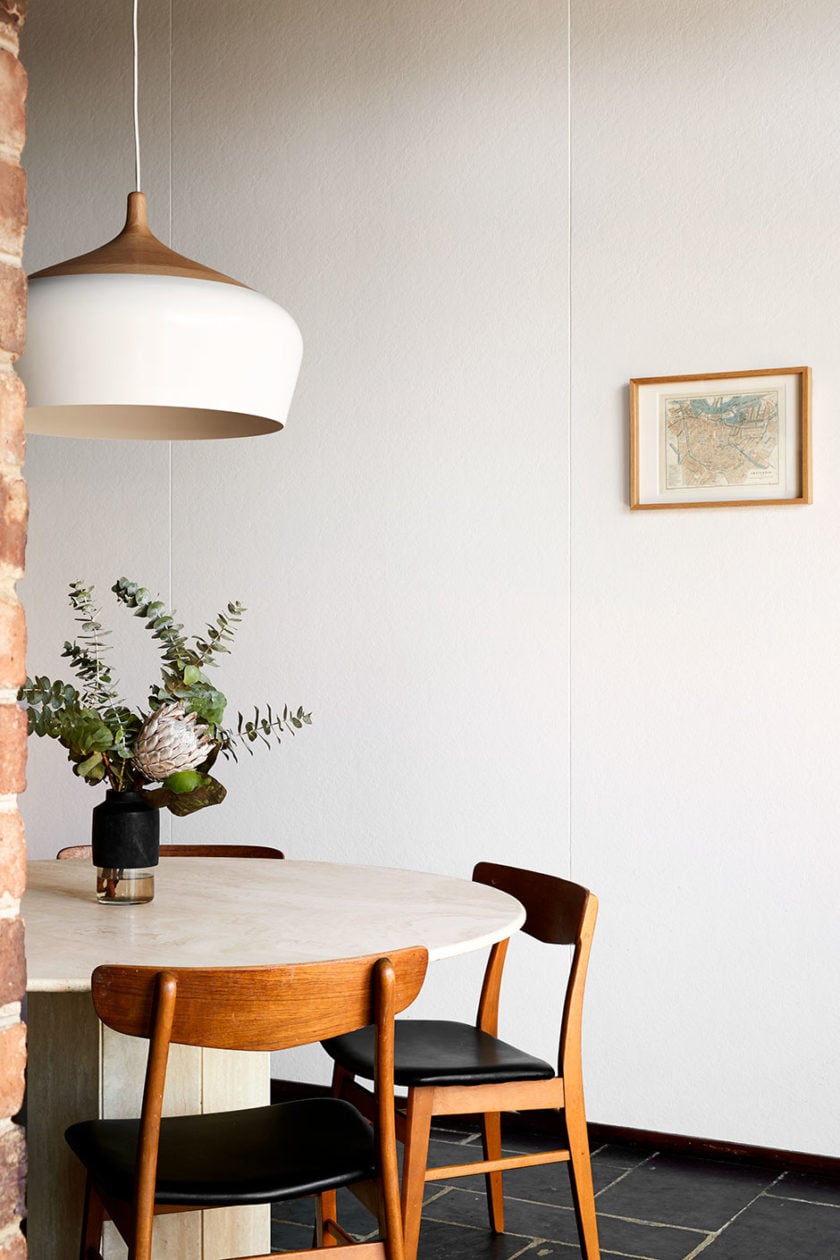 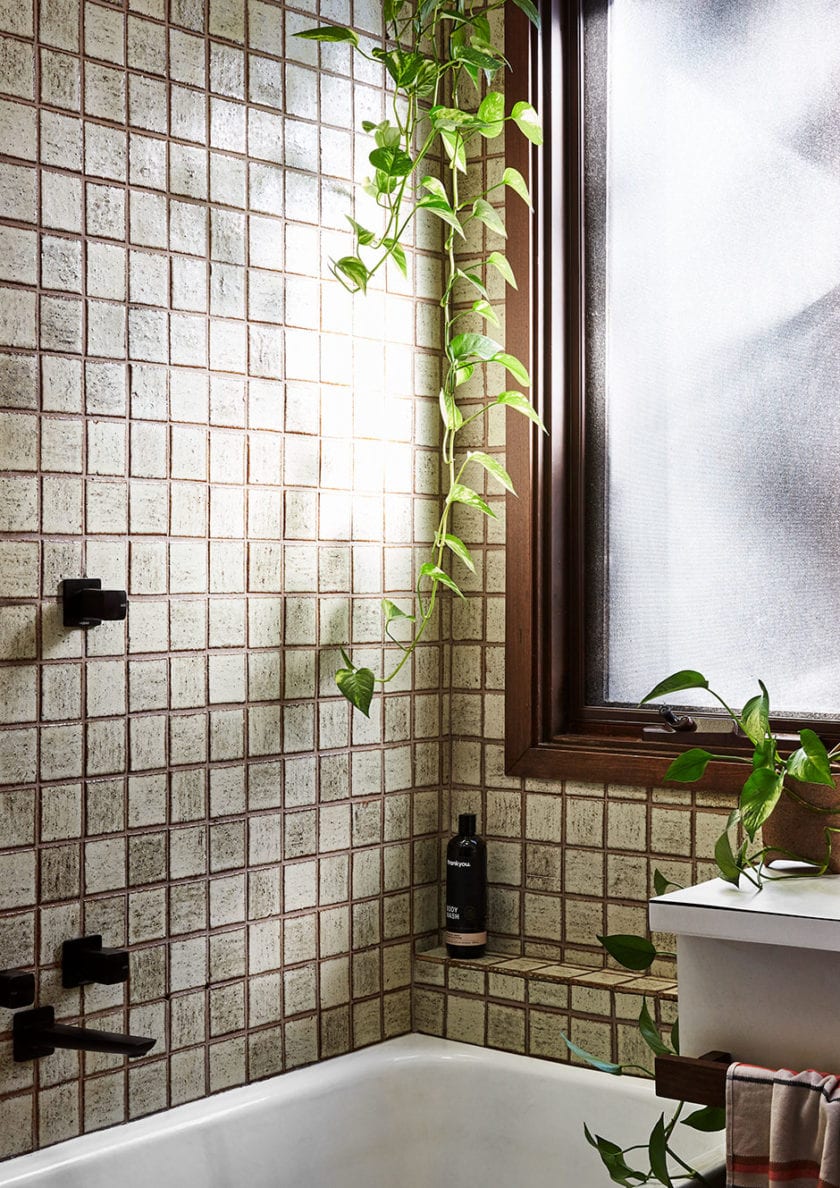 TOP The couple have recently replaced their timber dining table with a second-hand travertine one. “The travertine helps to break up all the timber, brick and slate,” says Kate. The Coco pendant light overhead is a design by Coco Flip, the studio Kate started in 2010. Haslett came on board in 2013, and today they both have a hand in their creations, while juggling their roles as parents, and Haslett’s architecture practice and gig as a teacher at RMIT. ABOVE Mariko and Juniper’s teeny-tiny bathroom features ceramic tiles with varied tones and a wonderfully rough texture, plus black tapware for a contemporary touch.

That little needed to be done to the house by way of upgrades was also exceptionally fortunate. They put solar panels on the roof, are working on the huge garden, and plan to one day renovate the kitchen and bathrooms and put in a rainwater tank. Other than that, they’ve simply been able to enjoy making their existing stuff feel at home, including their own Coco Flip designs.
“Our interior aesthetic is very relaxed — layered, warm, tonal and natural,” says Kate. “We don’t want to over-curate our home — it’s a place for us to just be, and we’re not too precious about anything. It’s such a pleasure to live with our own creations. We have our Mayu 04 pendant light in our living space — it’s a beautifully sculptural 1.7m-long piece that makes us so happy with its peaceful glow. We’ve also put a Coco pendant above our dining table, and have one of our coffee tables and a few ottomans in our living room.” 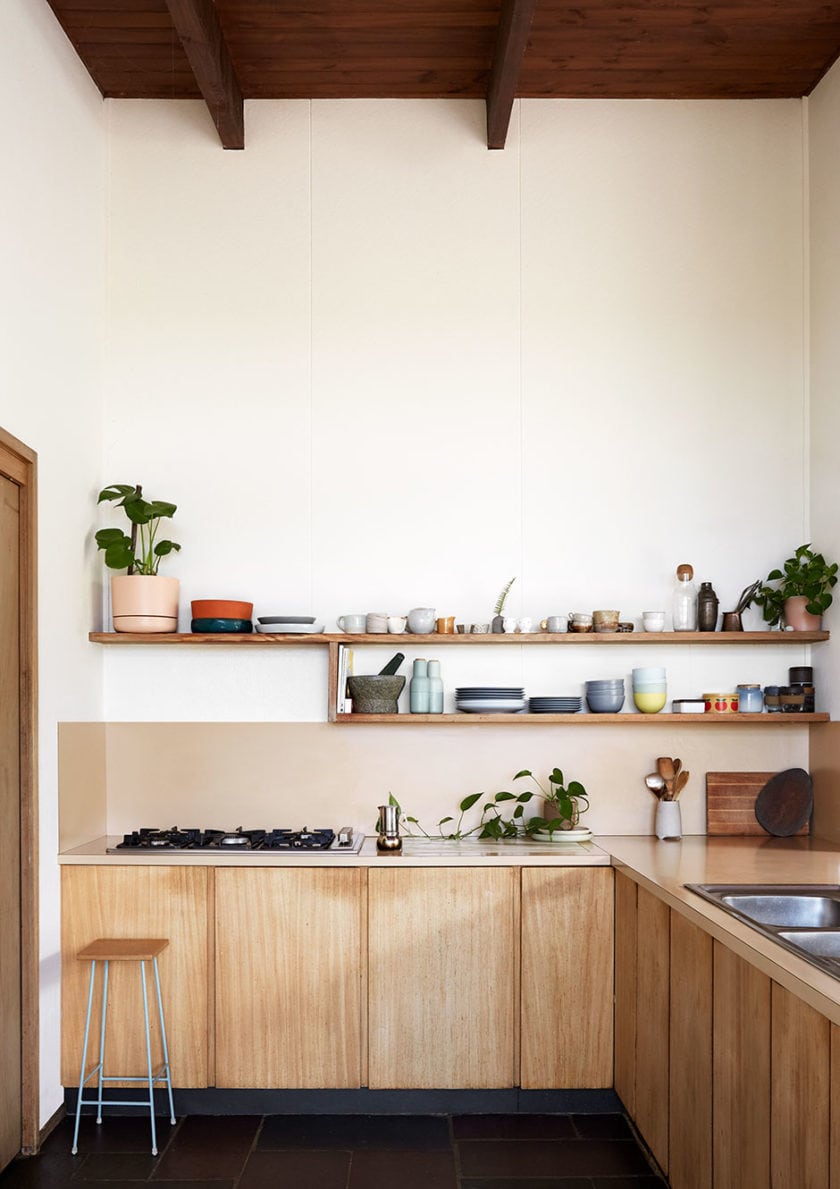 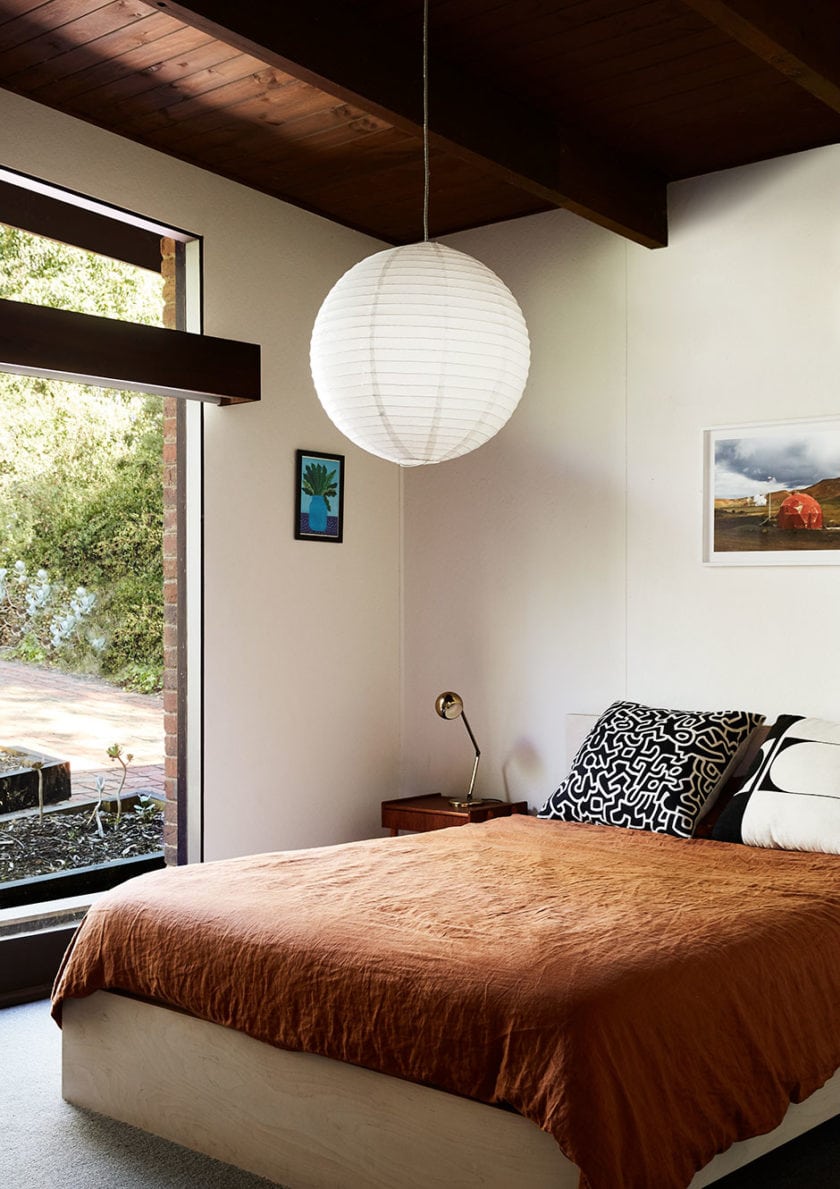 TOP A generous layout and plenty of bench space means this room functions beautifully. It connects to the garden and second living space (which gets the best afternoon sun, so is where they tend to hang out as a family and “make a mess”), which allows the couple to keep an eye on the kids playing while they prepare meals. Kate says Haslett is the chef of the house and loves to cook, his signature dish being homemade pasta. ABOVE The house is nestled into a sloping block at the top of a steep hill, and its generous windows embrace the outdoorswholeheartedly. Here, the master bed from Mark Tuckey is dressed in linen by In Bed and cushion covers from Kim Soo. The brass bedside lamp was found at a fleamarket in New York for about $20.

The couple’s latest collaboration for Coco Flip is Honey,  a new collection of lighting that was first shown in March at Melbourne Design Week. Handmade by some of Melbourne’s top talents — Bendigo Pottery, woodturner Charles Sandford and glass artist Amanda Dziedzic — it’ll be launched to the design industry at Denfair in June, alongside some new furniture. 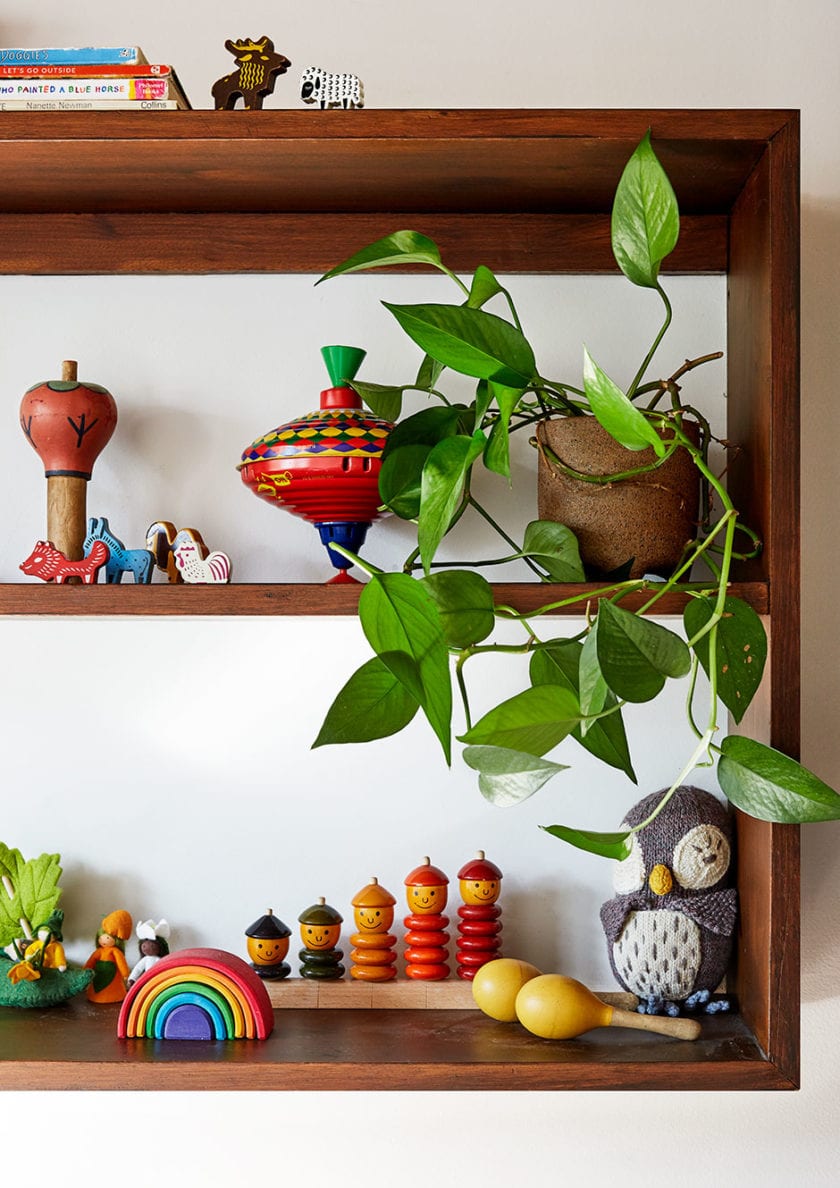 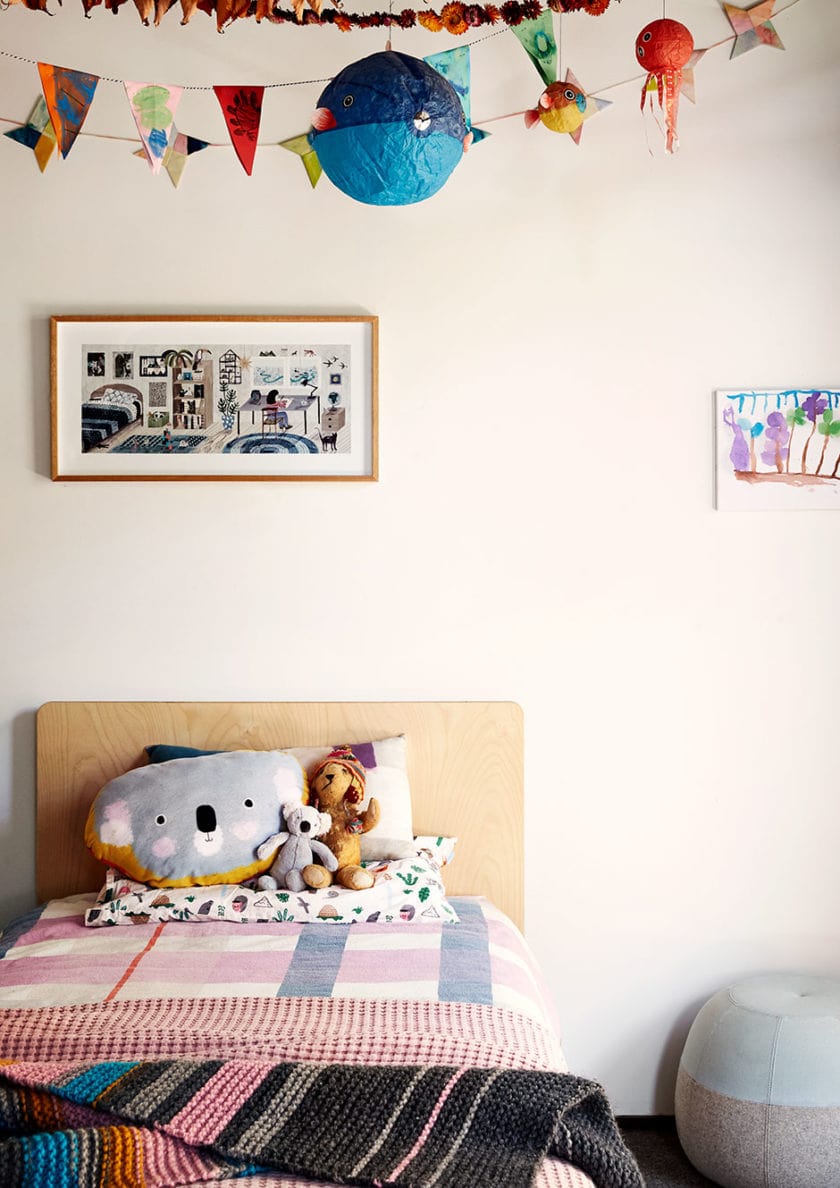 TOP  Kate describes their interior vibe as “a little nostalgic, with a modern twist”. The treasures on the shelves in Juniper’s room include some little wooden animals Kate used to play with as a child. The ceramic planter is by Bridget Bodenham. ABOVE On Mariko’s Plyroom bed is a cute koala cushion made by the couple’s friend, illustrator Jess Racklyeft. The artwork is by Marc Martin, the hanging kamifusen (Japanese paper balloons) are from Cibi, and the Puku ottoman is by Coco Flip.

“There’s never a dull moment!” says Kate of life juggling two small children and two small businesses. “Sometimes it feels as though we’re running on a hamster wheel, but I find being here really grounds me. We feel a great responsibility as the custodians of this house and want to protect and cherish its authenticity as much as we can. It’s very much our forever home, and we plan to give it all the love it deserves.” 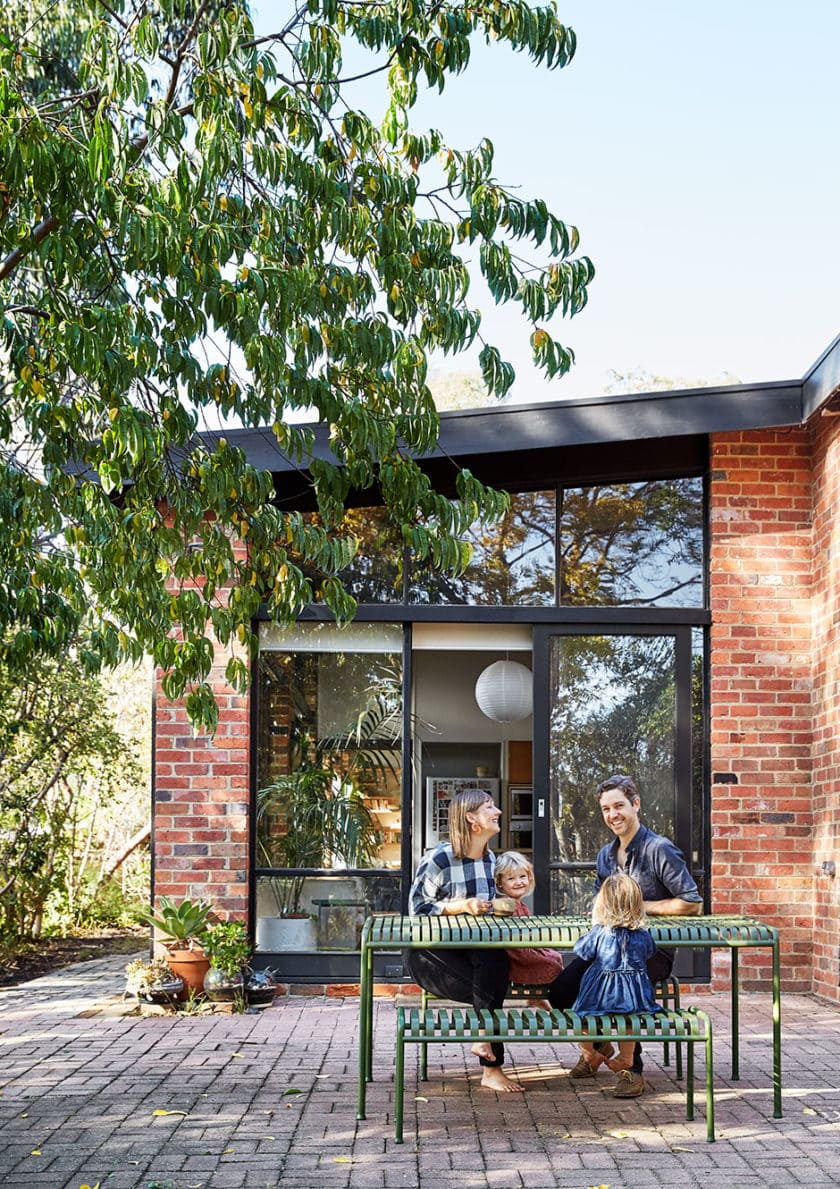 ABOVE “It feels like a massive project,” says Kate of the garden revamp, “but Haslett is excited to get his hands dirty. He’s more of a gardener than me, though neither of us are the type to spend every weekend in it. We much prefer a native garden over anything too prissy and manicured, and are all about the survival of the fittest.”