Up where we belong 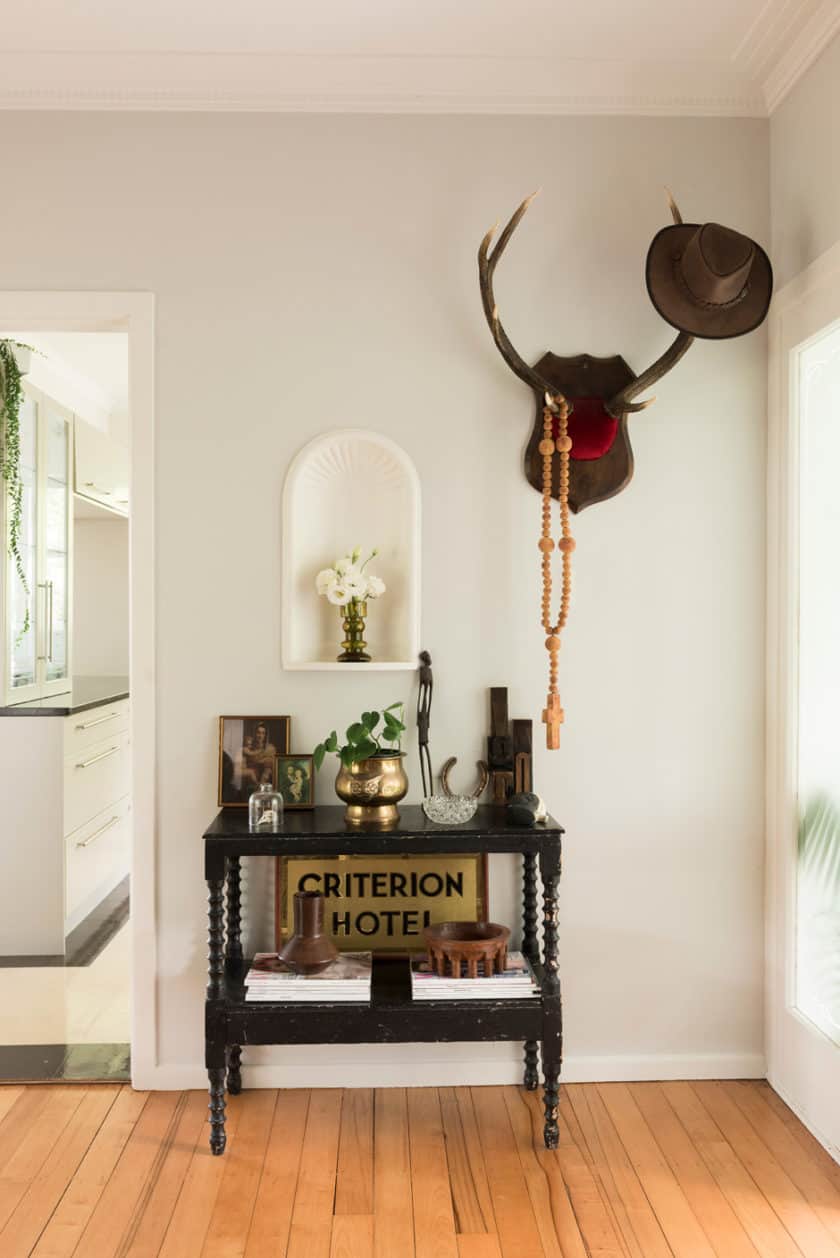 After an enigmatic introduction, this treehouse-like home has come to fit its owners like a glove.

Five years ago, Melle van Sambeek experienced a life-changing moment while out running. Jogging down one of her favourite streets in Auckland’s Blockhouse Bay, she came across a ‘for sale’ sign. Even though she couldn’t see the house, which was hidden down a tree-lined driveway, she could tell it was positioned on a sunny slope with harbour views.
“This is going to sound crazy, but my dad had just died and I believe he led me here,” she says. “I’ve always admired this street and dreamed about living here one day. We were about to renovate the house we were living in, but after I saw this place, everything changed.”
Abandoning their renovation plans, Melle and her husband Adam put in an offer – and the two-storey 1950s brick-and-tile home was theirs. They began working on it almost immediately. “[Some] people renovate just before they sell, but I wanted to create a home we could enjoy from the start,” says Melle. “We’ve never regretted that decision.” 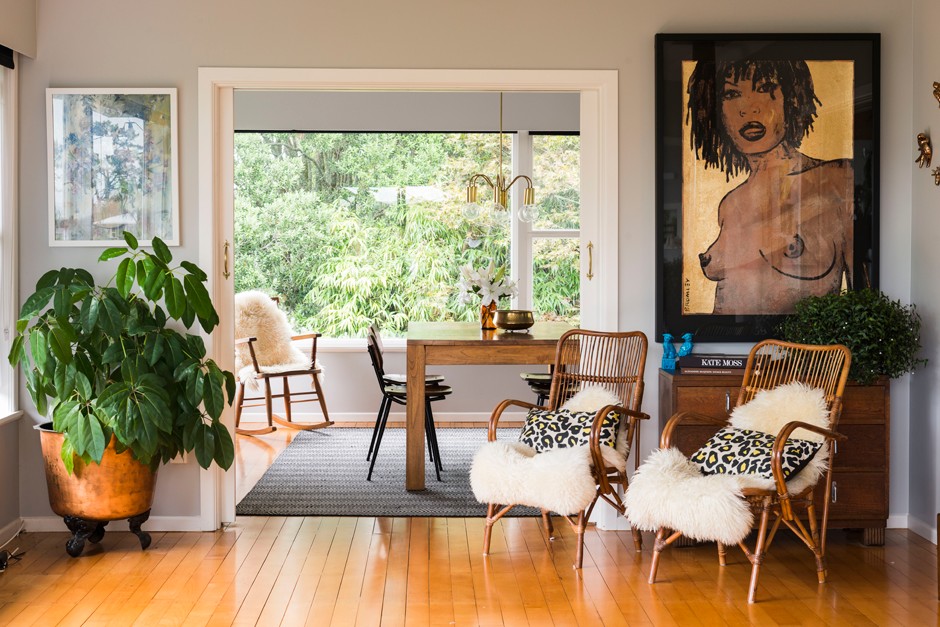 TOP Melle likes to fill her home with curated displays of curios and collectibles. Most of the items displayed in the entranceway are pieces she discovered in op shops and vintage stores. She bought the carved wooden figure while travelling in Africa, and the hat belonged to her dad. ABOVE An artwork by Australian artist David Bromley is a focal point in this open-plan living/dining space. Melle picked up the cane chairs at a secondhand store and made them her own by adding sheepskins bought online and cushions from Linen House. The rocking chair was fortuitously found abandoned on the side of the road.

Melle and Adam did a lot of the labour themselves, including painting the interior upstairs and down. They ripped up the cream carpet to reveal timber flooring in mint condition, and updated the tired old bathroom, creating a glam yet family-friendly space with white subway tiles and brass detailing.
Melle has a strong sense of her own style. The key to creating a cohesive look, she says, is sticking to a restricted colour palette. “I prefer neutrals with black, gold and grey accents and a little injection of colour here and there. I also love wood for the way it adds warmth.”
The house is dotted with treasures – many of which cost next to nothing. Melle discovered a few of her favourite pieces discarded on the side of the road; others are thrift shop finds. “I love the thrill of the chase,” she says. “Nothing makes me happier than going into an op shop and discovering a bargain. I get a lot of comments about these pieces. I’ll find a lamp, for example, and put a new shade on it, and it instantly looks a million bucks.”
Although bargain buys give her a great sense of satisfaction, one thing Melle does invest in is art. It’s a passion she developed while backpacking with Adam in the US almost 20 years ago. The couple visited a modern art museum in Brooklyn, New York: “That was the first time I’d been exposed to art at that level – and that’s when my love affair with art began.” 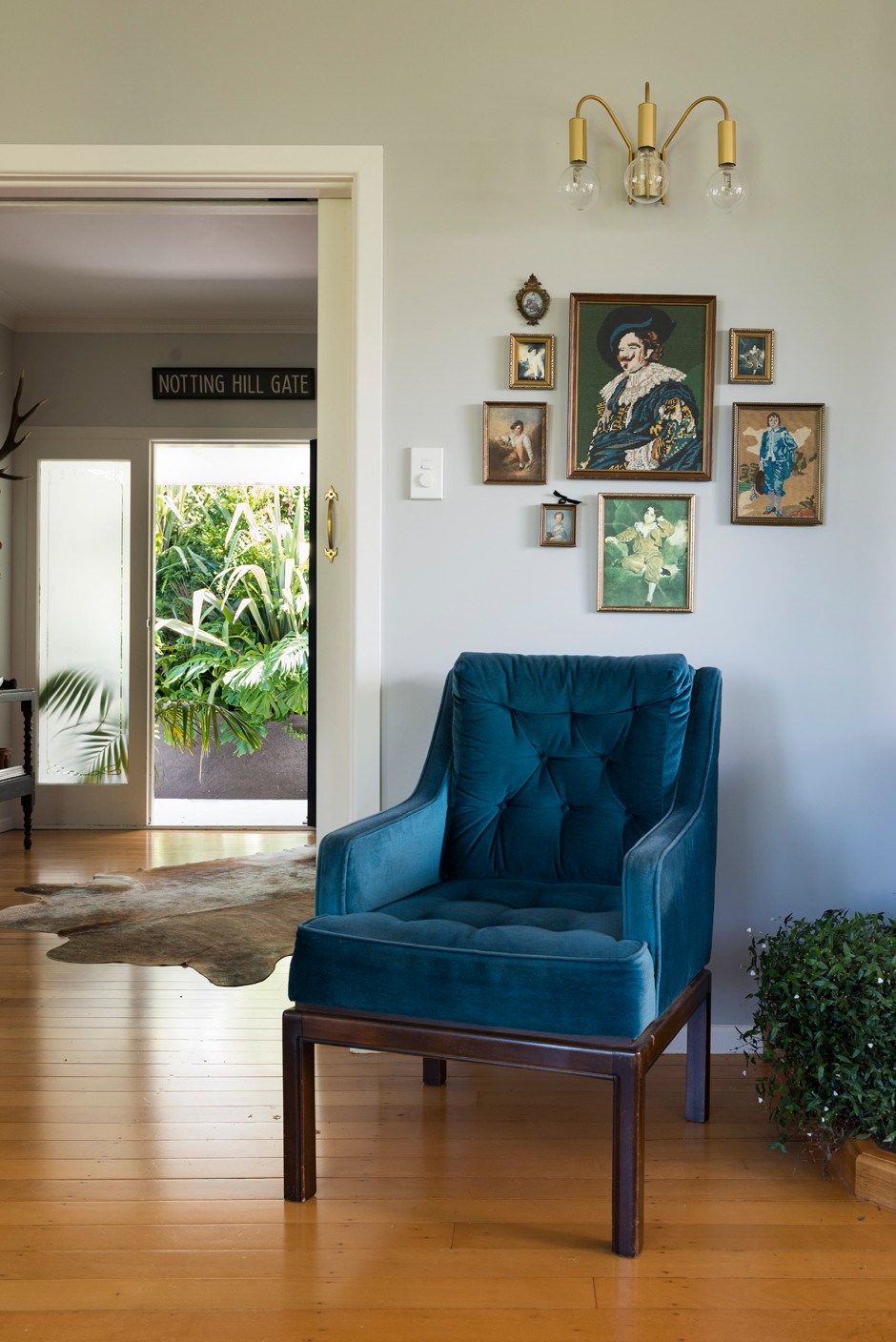 ABOVE Sticking to similar hues is important when it comes to getting a display right, says Melle. Here a cluster of pictures from secondhand stores ties in with an armchair bought at an auction.

Now known for her own creative talents, Melle says she fell into hairdressing, which led to makeup artistry and, more recently, styling. “I absolutely love styling,” she says. “Being born and raised in small-town Western Australia, I never knew you could make a career out of it. Where I’m from, the career options were hairdresser, nurse or teacher. It was only when I left home at 19 and went to London that I discovered all these other options.”
Melle calls New Zealand home after moving here from London with Kiwi-born Adam 17 years ago. Having created the home of her dreams, she likes nothing more than hanging out there. “I love just pottering around. As an only child, I’d spend hours in my bedroom, making things and changing it around while listening to music. That was my happy place, and not much has changed! It takes a lot to drag me away from here.”