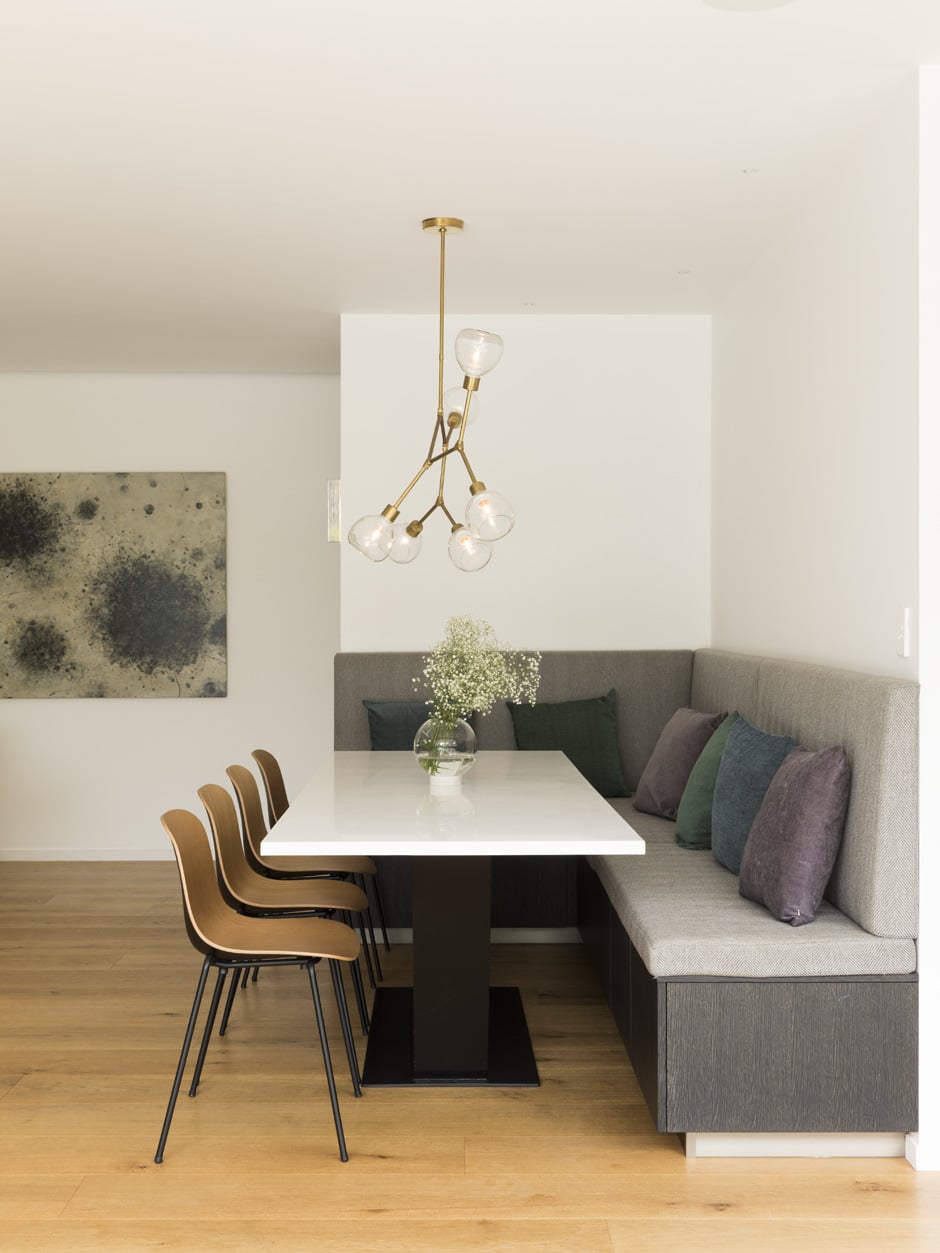 Set in a palm-studded garden, this East Auckland abode is sanctuary and social hotspot in one.

Designing their own home had long been on Renee and Barry Woolcott’s bucket list, so when they purchased a section in Auckland’s eastern suburbs in 2008, grand plans began to take shape. After undertaking some minor renovations to make the property’s existing home liveable, the couple took their time weighing up the possibilities of further alterations versus demolition and starting from scratch. The latter won out. 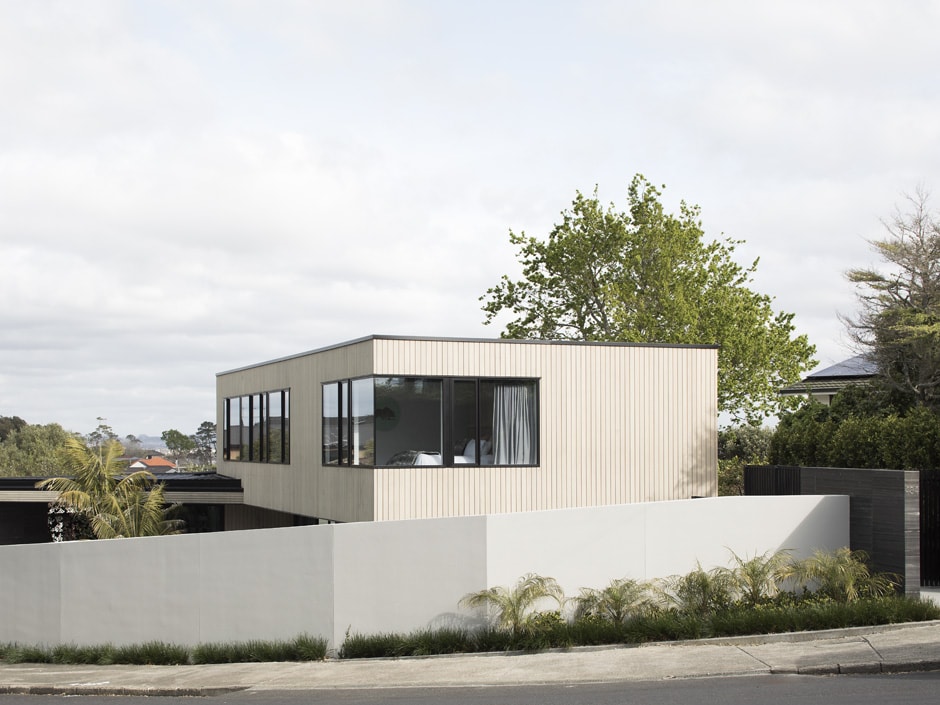 EXTERIOR The Woolcotts’ steeply sloped corner section was a tricky one to tackle, but with the help of Young & Richards architects, the couple has created a new home that maximises their living space and views while maintaining their privacy. With a pared-back cedar – stained with Resene Mainsail – and exposed steel exterior, the contemporary dwelling is spread across three levels, the trio of pavilions cleverly stacked at interesting angles for a less solid look than your average multilevel design.

Some of their first thoughts around developing the site included overhauling the gardens. “We weren’t even using the land,” says Barry. “There was a little goat track to get to the back garden, and 70% of the yard was basically just a run for our dogs.” Maximising the views across the harbour to Rangitoto was another priority for the pair, which made building upwards essential, and as keen entertainers, creating dedicated spaces in which to indulge their love of hosting was also top of mind. Four years and two kids later, their wish list had grown even longer to accommodate the needs of a young family. 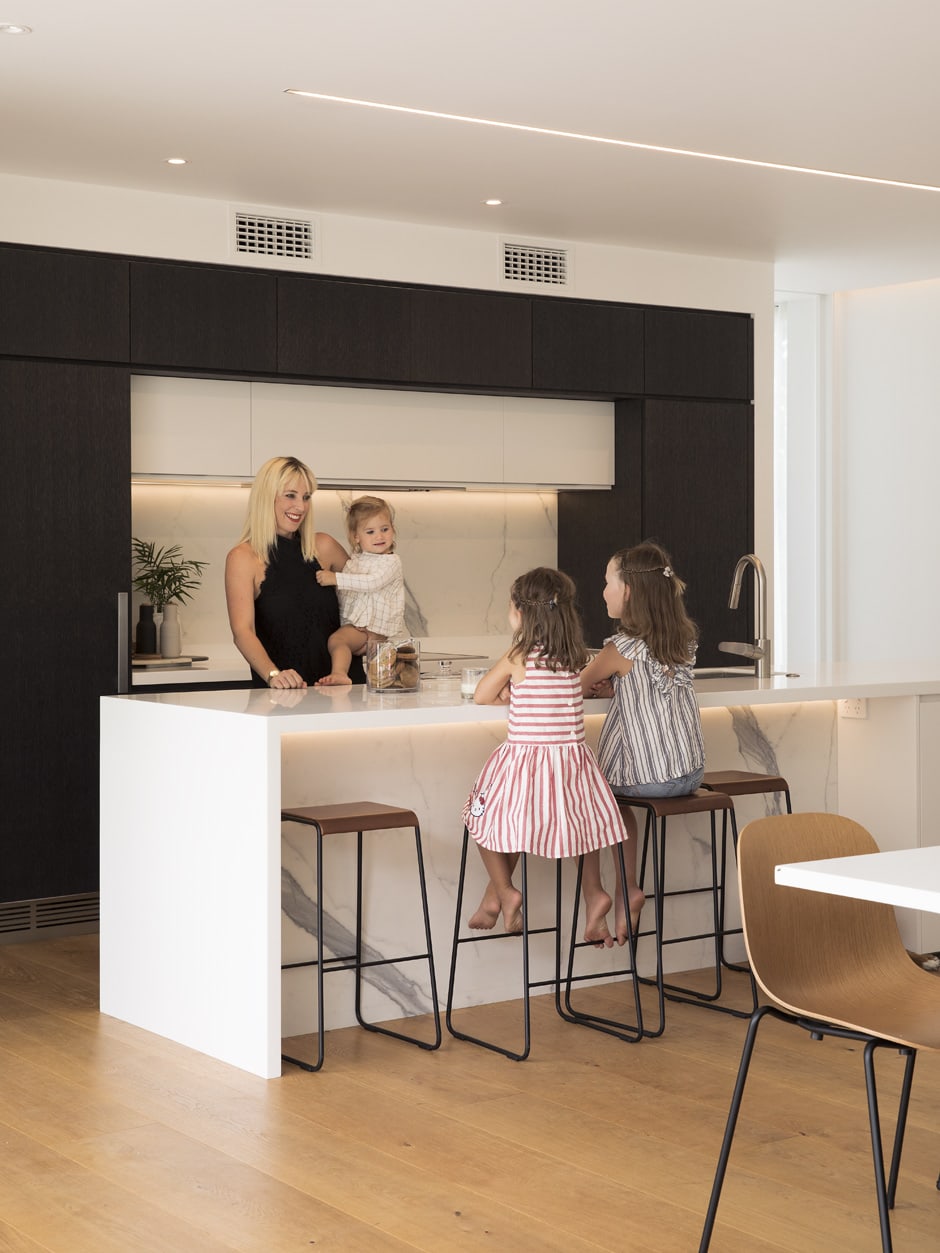 KITCHEN The home’s material palette was devised entirely by Renee, who specified bespoke solutions for almost every surface, from the custom Krion kitchen island with marble-effect porcelain slab, to the leather that tops the S2 bar stools by David Moreland. Lighting is another well-considered element, with recessed LED strips in the roof, walls and island casting a soft glow on the sleek surfaces.

Wedge-shaped and on a hill, the section was not without its challenges, so the Woolcotts engaged architects Young and Richards to help devise a plan that would ensure they ticked everything off. The solution was to carve into the steep slope, working with the landscape rather than against it to create an oasis centered around a generous courtyard and pool area. The home is designed as three pavilions, with a guest suite, laundry and garage on the ground level, living areas in the centre and sleep spaces on top. Stacked on angles, the distinct structures each contain a series of intimate spaces that provide the family with purpose-designed zones in which to enjoy life’s various activities. 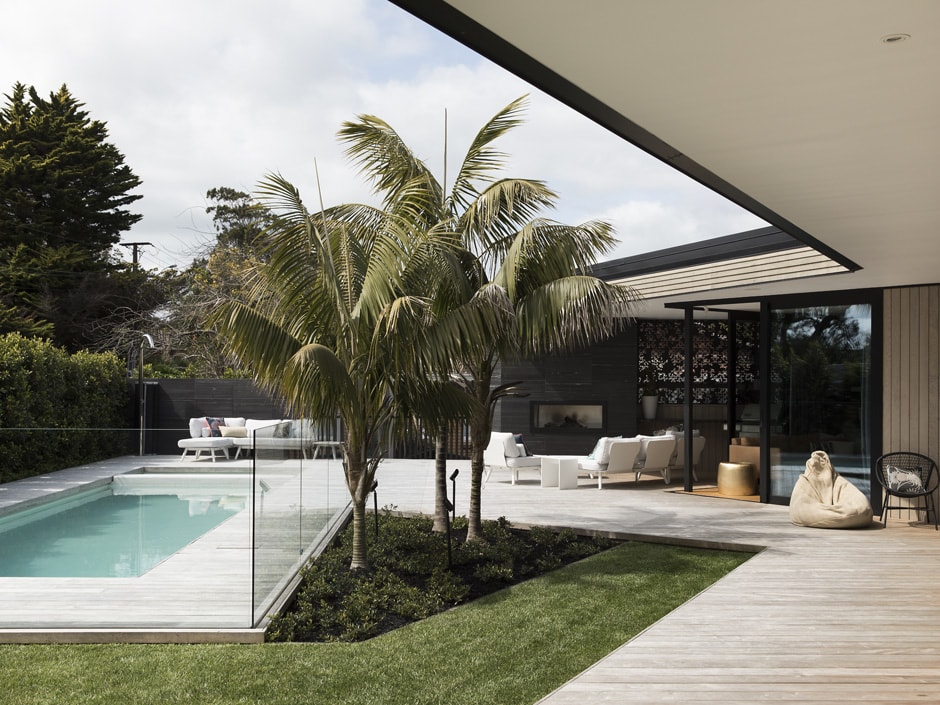 ABOVE Between the pool and the covered barbecue area (complete with a fireplace), the home’s outdoor spaces are well used all year round. TOP With board games and Lego stashed in the inbuilt shelving, this living space has become the kids’ hang-out zone. Vivienne, Emmeline and their friends love to cosy up here for movie nights, and the floor-to-ceiling glass sliders on two sides make it easy for Renee and Barry to keep an eye on them while the grown-ups are socialising outside.

Thanks to her studies in interior design and involvement in the family business, flooring company Jacobsen, Renee has a keen eye for materials and surfaces. Excited by the chance to get involved with the creative aspects of the interior, she became the build’s project manager. With two preschoolers and a baby on the way, the timing could have been better.
“But life throws these things at you!” she laughs. “At nine months pregnant, I was tottering down wooden boards to check on our half-built home, and two weeks later I was back with our new baby in a front pack to discuss lighting plans and tiling with the builders. It was an intense few months for us, but a total privilege.” 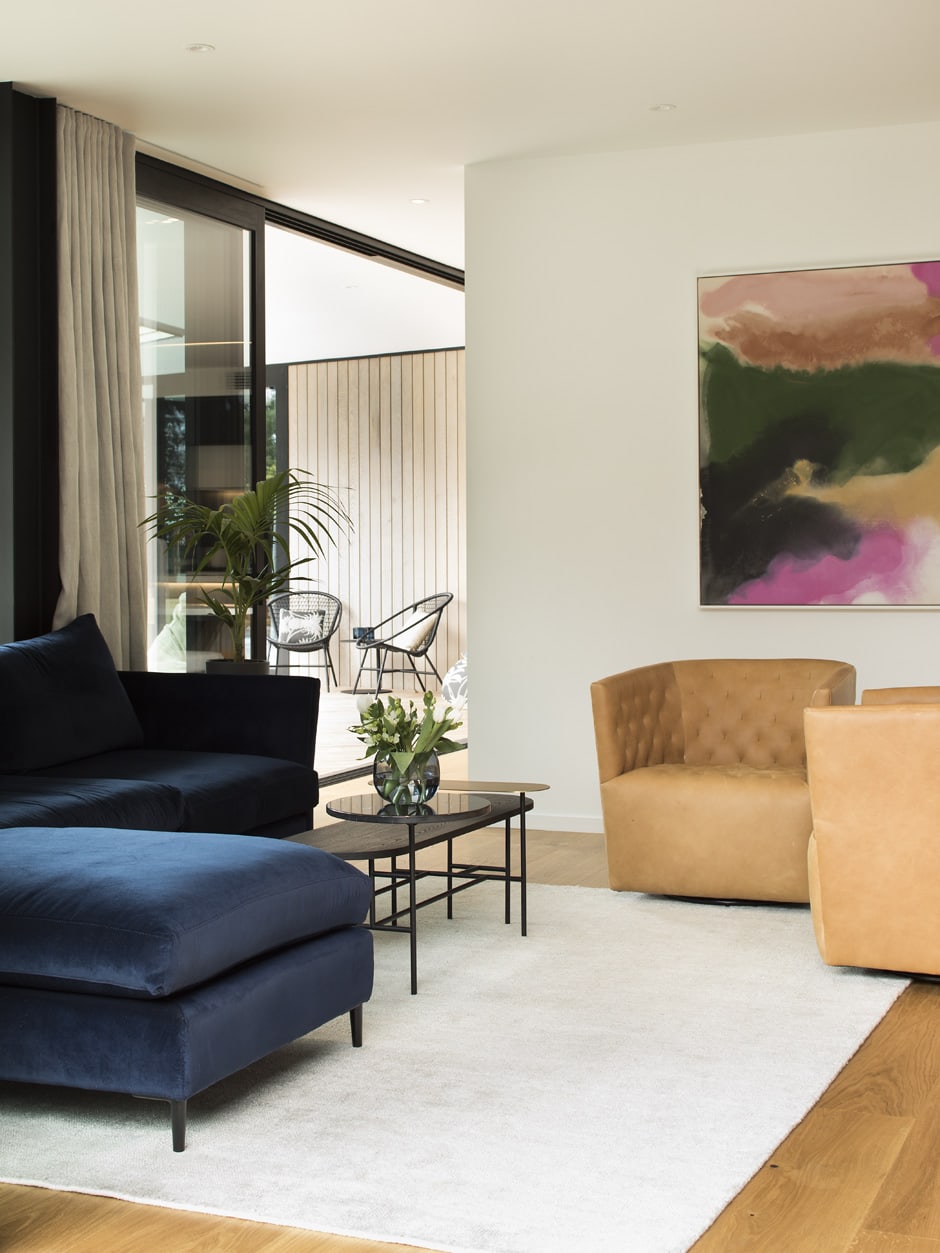 LIVING This formal lounge on the other side of the kitchen/dining area is where Renee and Barry like to unwind in the evenings. It features a petrol-blue velvet sofa they had custom-made by Forma, armchairs and an &tradition Palette JH7 table from Dawson & Co, and a painting by Pamela Tinning.

At the centre of the finished home, clean lines define the kitchen and dining area. Barry is Canadian, and the couple’s time spent living in Toronto and working and holidaying in the US has given them a love of North American style. In the dining room is a nod to this aesthetic in the form of a custom-made booth, jewel-toned cushions and a chandelier overhead elevating the look from roadside diner to modern and sophisticated. In the kitchen, a marble island, LED lighting and a walk-in butler’s pantry continue the luxe yet family-friendly vibe.
“Because of my background in buying tiles, the selection of flooring products and tiling were of particular importance to me,” says Renee. “I’m so pleased with the outcome, especially the little details that in a strange way you hope no one notices.” 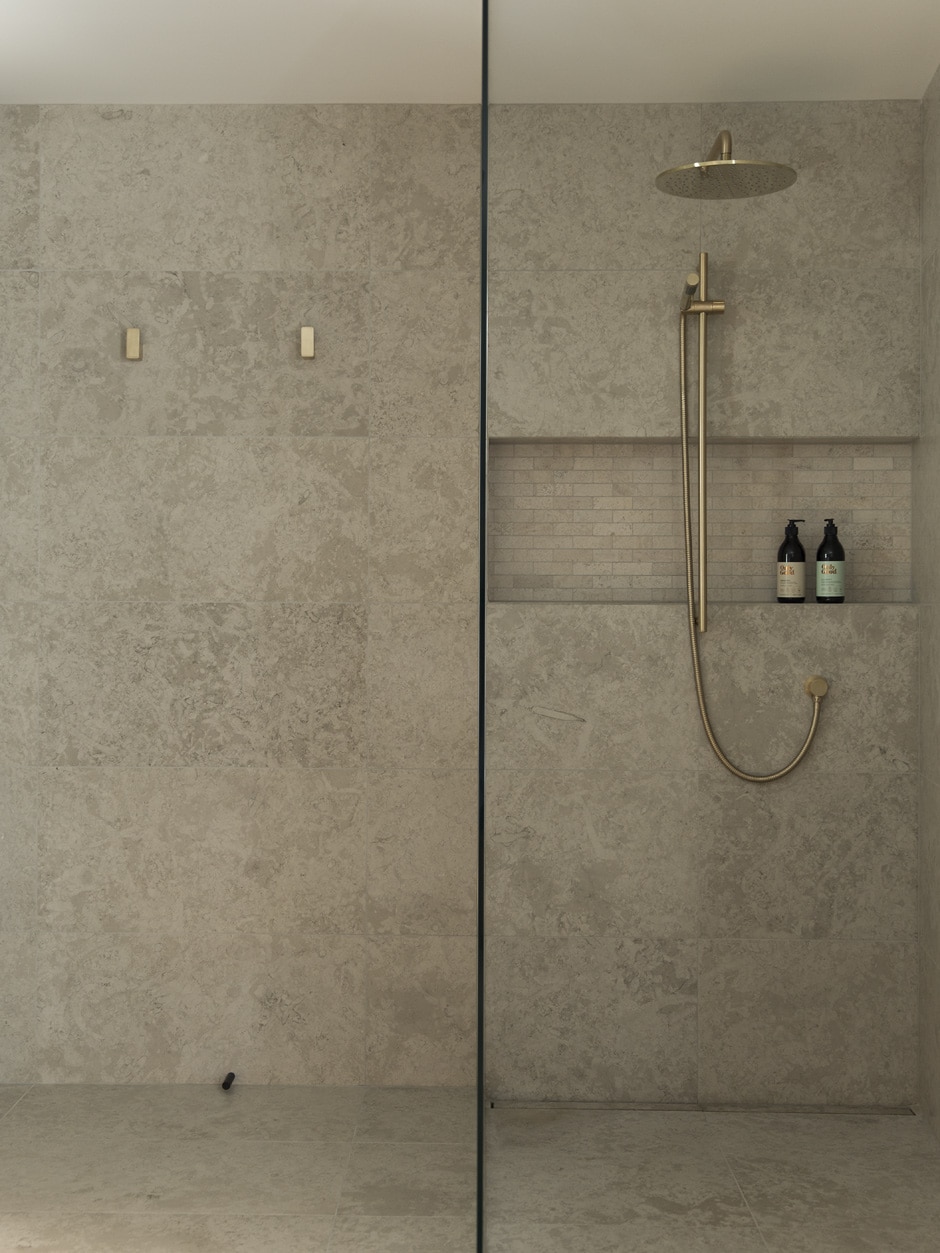 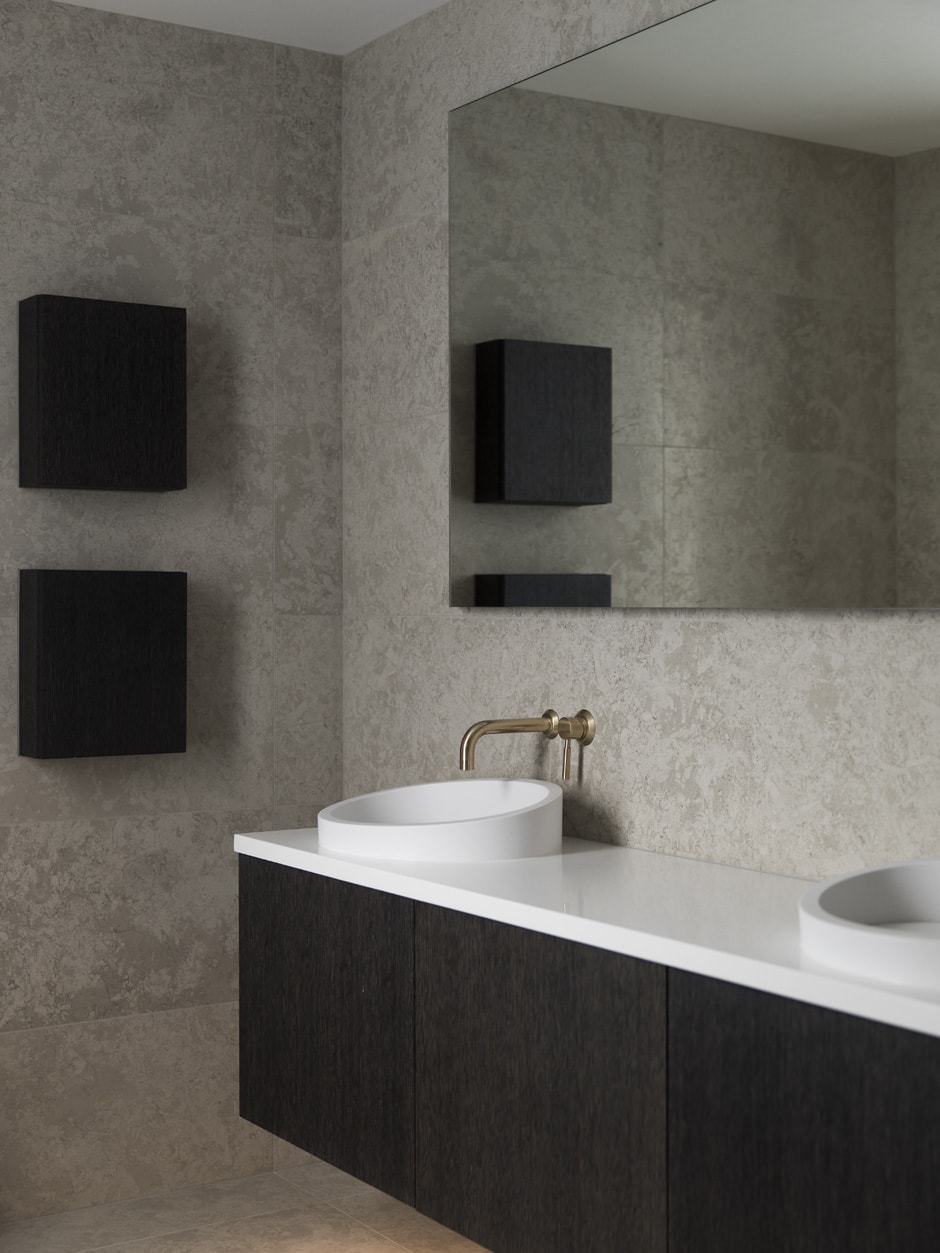 ENSUITE Renee and Barry’s bathroom is a minimalist haven. The carefully chosen details include a showerhead and tapware by Vado from Robertson, plus large-format floor-to-ceiling Ottawa natural stone tiles and Amsterdam mosaic tiles, both from Jacobsen. Custom-designed by Renee, the vanity echoes the cabinetry seen in the master bedroom, kitchen and living room.

The home’s extended roofline and deep soffits make light work of the ultra-sunny aspect. “I love the feeling of sun streaming in, so initially we worried that the shaded outdoor area would make the interior of the house too dark,” says Renee. “But it would have been a nightmare without it, because it’s just so hot here. You can’t sit in the sun for more than 15 minutes, so we’re really glad we have this so we can enjoy outdoor living.” 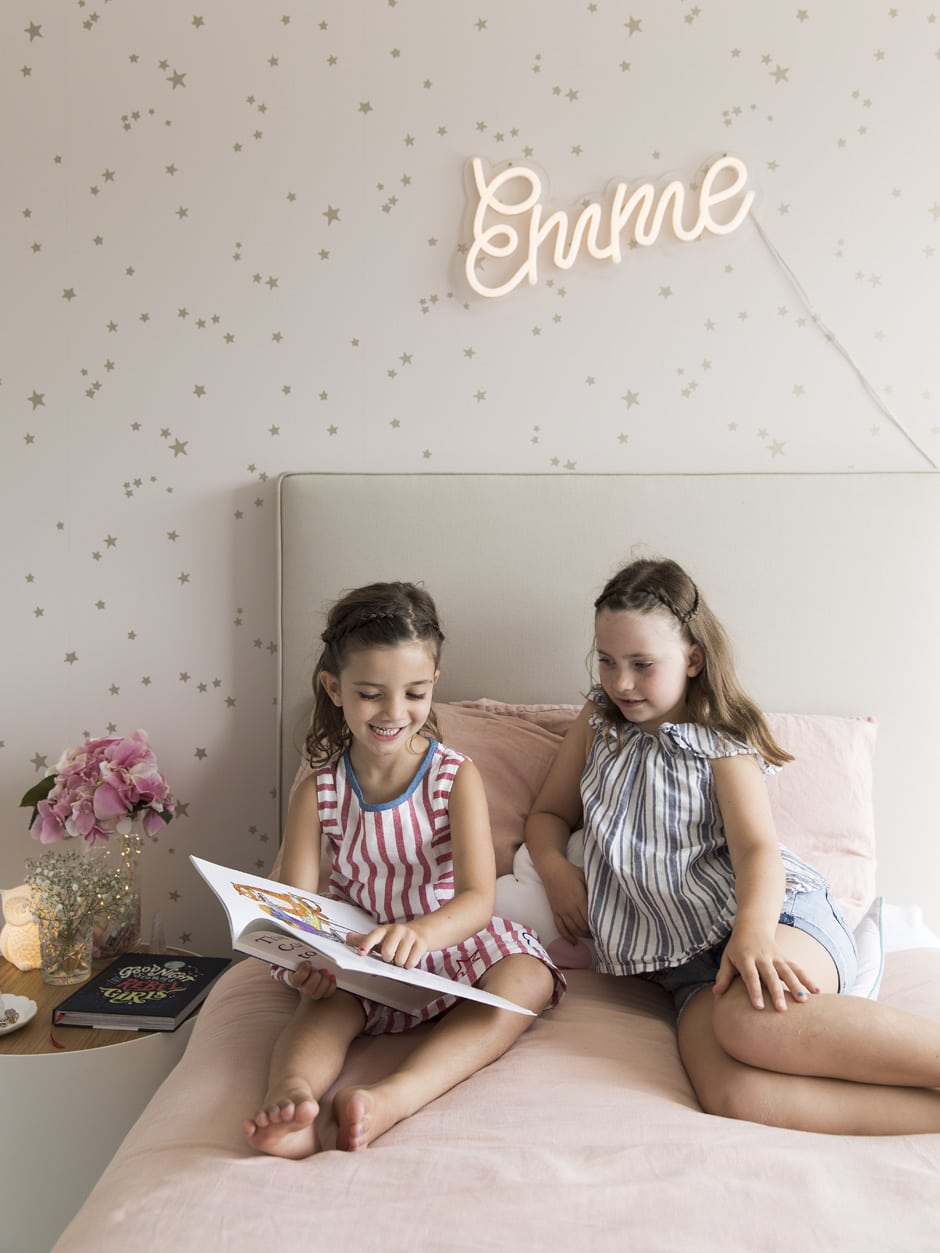 ABOVE Emmeline’s bedroom is decorated with wallpaper from Cole & Son’s Whimsical collection in the Stars print. Bespoke headboards in neutral shades provide an extra décor dimension in the elder girls’ spaces.

Despite its location on a busy suburban corner, the walled garden gives the property a sense of tranquility and provides the ultimate playground for the children, plus privacy from the road. “We couldn’t be happier with the end result,” says Renee. “We like to host our family and friends for visits, barbecues and parties, and it’s then that we appreciate the space and flow of our home the most.” 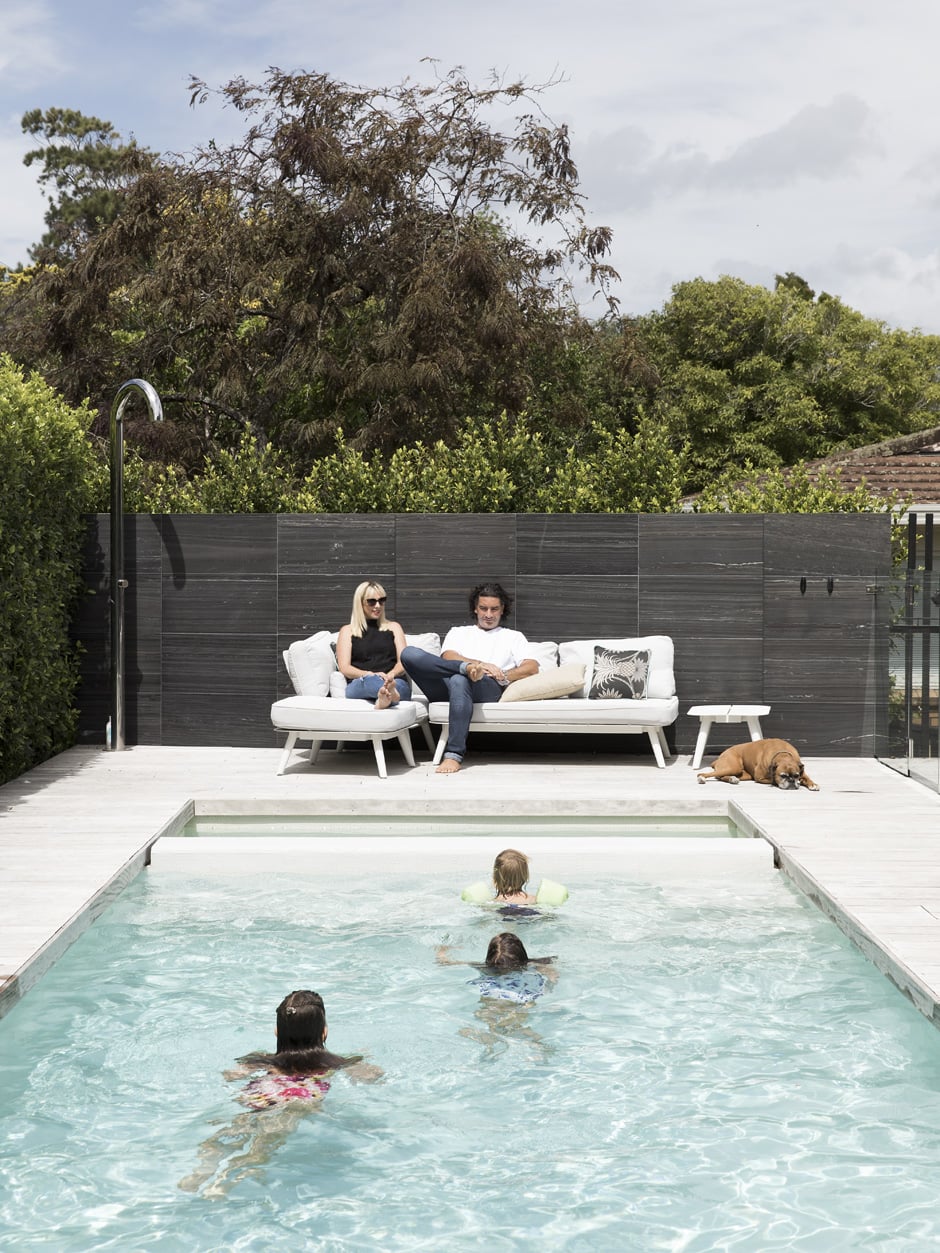 POOL For a pleasing continuity,the black quartzite stone tiles from Jacobsen seen here are also used around the outdoor fireplace and at the home’s entrance. The Club outdoor shower is from Plumbline and the sofa is from Città.