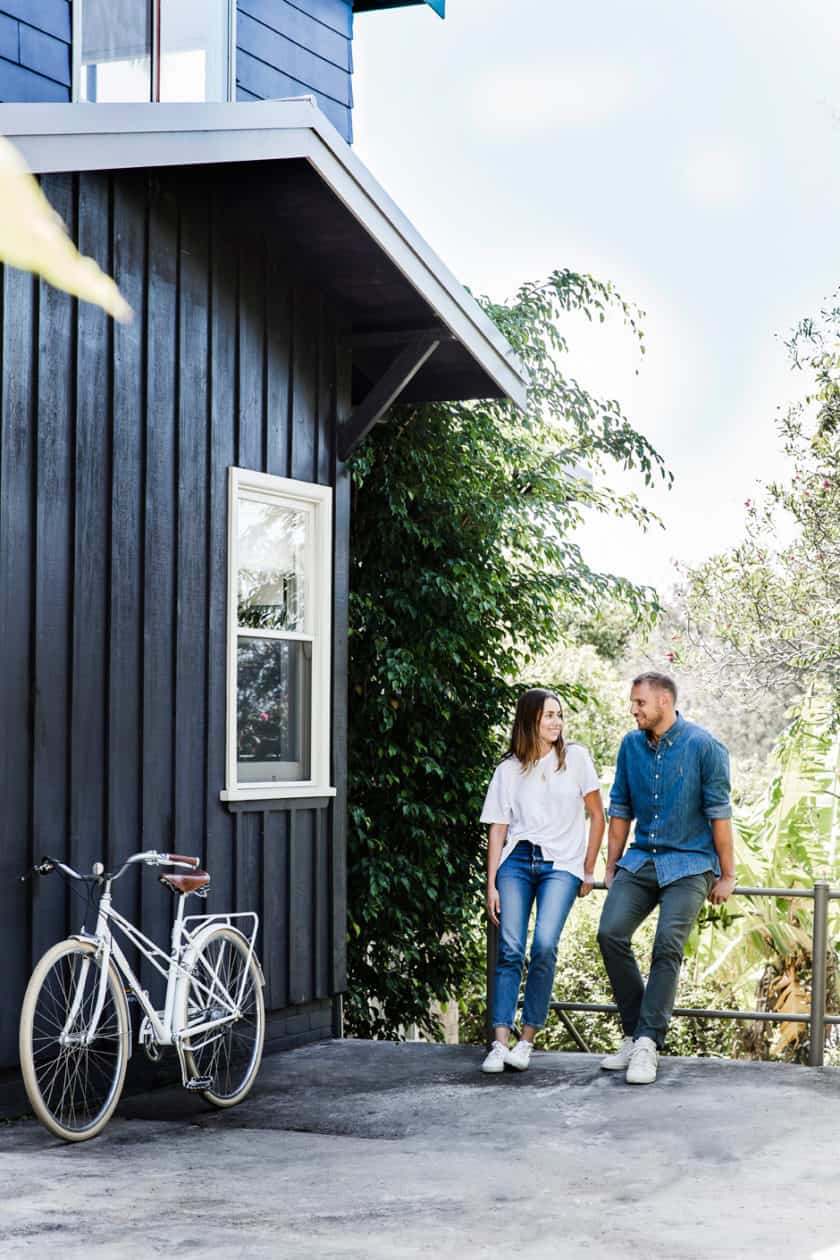 A coastal cottage overlooking Sydney’s Narrabeen lagoon is kept up to date by a contemporary refresh.

For newlywed couple Hannah and Paul Dennis, it was love at first sight. “We both knew straight away that it was ‘the one’,” says Hannah of their instant connection with their home. “We moved in three weeks before our wedding, which was rather hectic, especially as Paul’s buck’s weekend coincided with the move-in date.”
Not wanting to take the shine off the honeymoon period, they waited a few months before commencing their intended renovation. “We were lucky that the house was already in a liveable condition. The majority of changes were aesthetic tweaks and additions to finish off our dream home.” 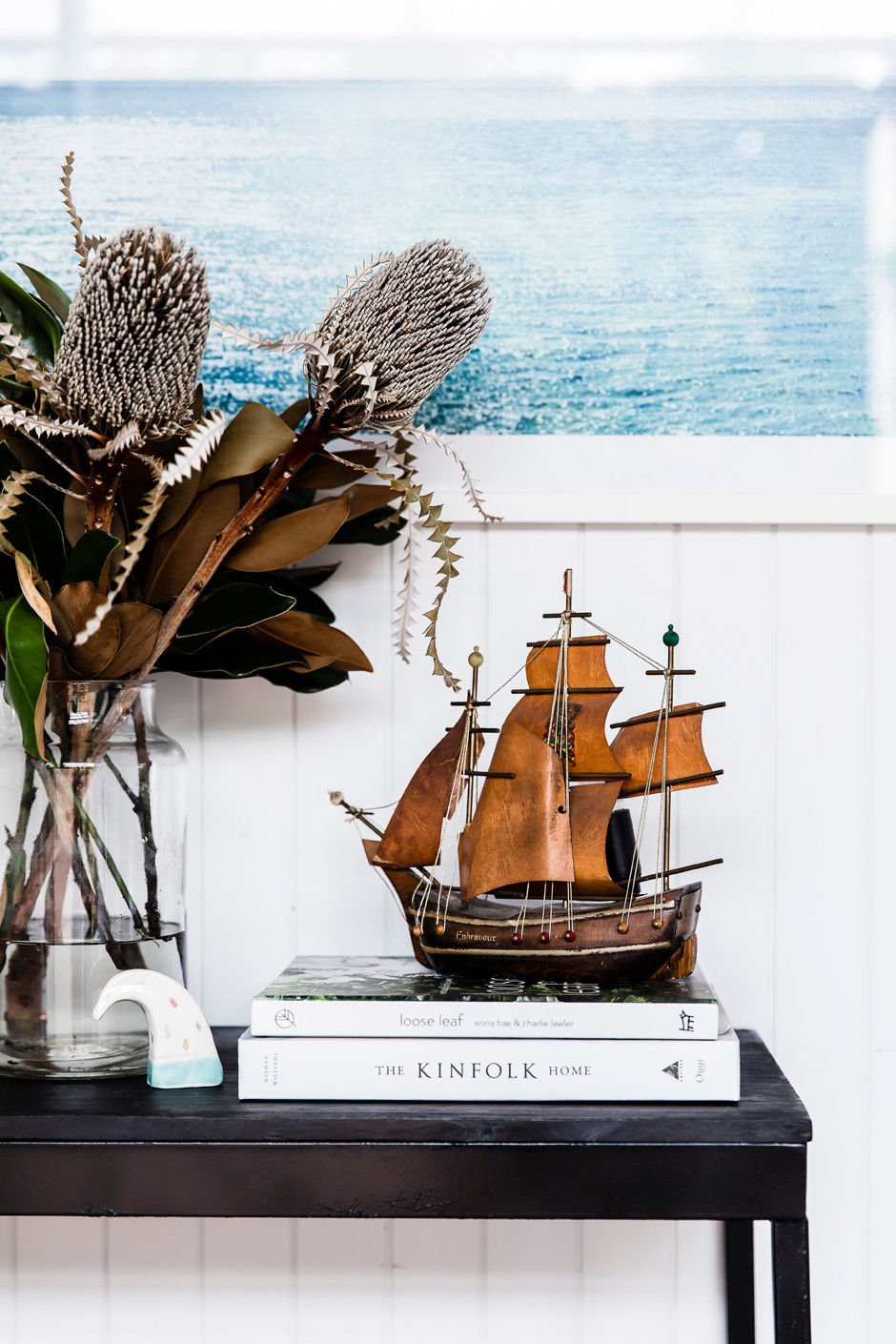 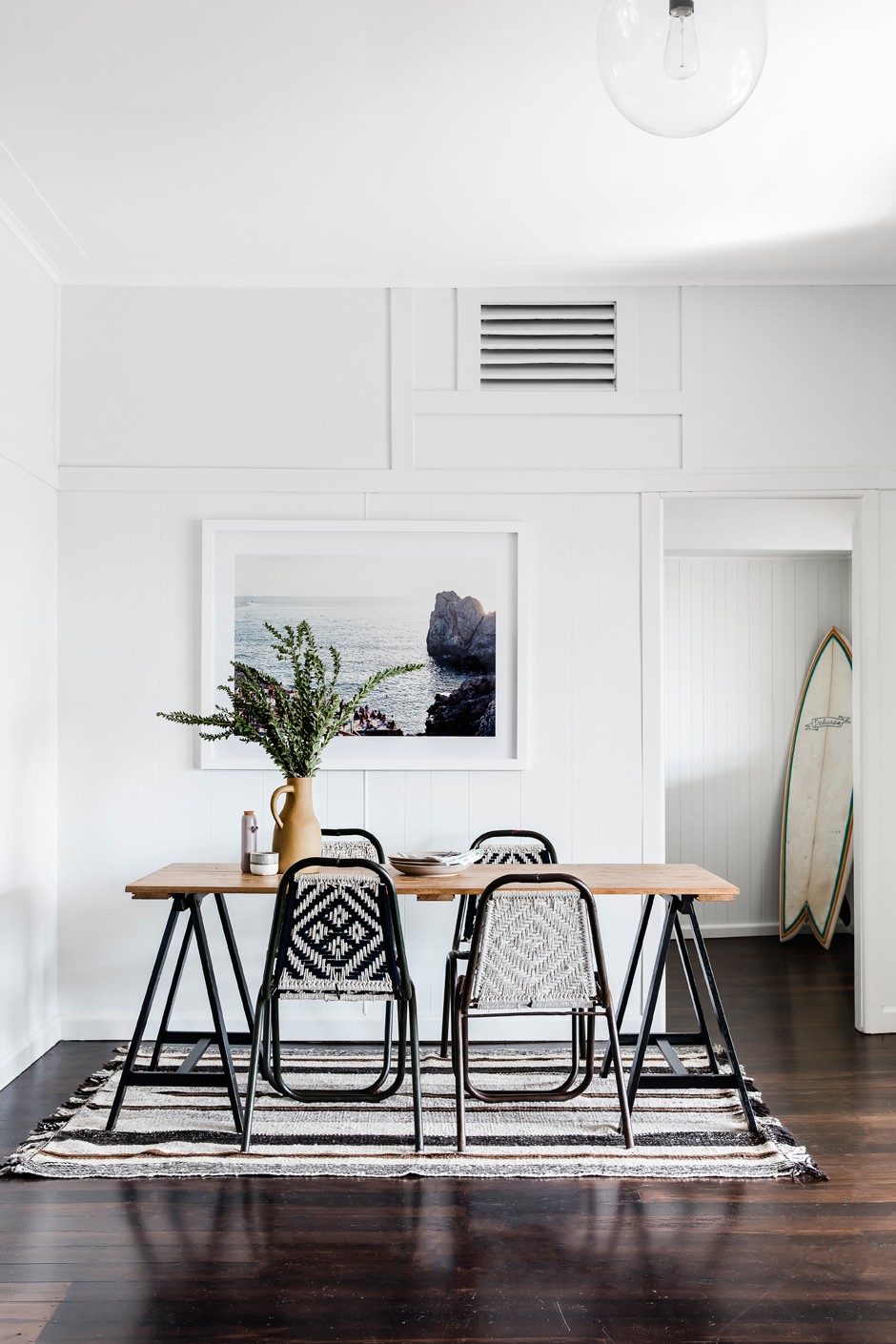 TOP This little ship light was made by Paul’s late grandad, Ernst. The photographic print was an engagement gift from the couple’s friend, photographer Pete Daly, who took the photo on a trip to the beach with Paul. ABOVE Accompanying the table, custom-made from reclaimed timber by a seller on eBay who crafts them to suit, are chairs Hannah bought from Orson & Blake several years ago, “before we lived together or even had a dining table to sit at! I saw them one afternoon when I walked past the store and made an impulse purchase.”

Only two major alterations were deemed necessary to improve things. The first was opening up the kitchen onto the dining area by removing several internal walls and bulkheads from both spaces to create a more open-plan area with better natural light. The second was taking advantage of the lagoon view from the first floor.
“We converted the second living space upstairs into our master bedroom, using a barn-style ceiling support beam that allowed us to raise the height of the ceiling by 30cm,” says Hannah. “It was the most rewarding part of the renovation.”
The couple had the clever idea of reselling many of the fixtures and materials they removed from the home on Gumtree and Facebook – not only to save money to put towards the cost of the renovation, but also to salvage and recycle materials so they didn’t end up as landfill. 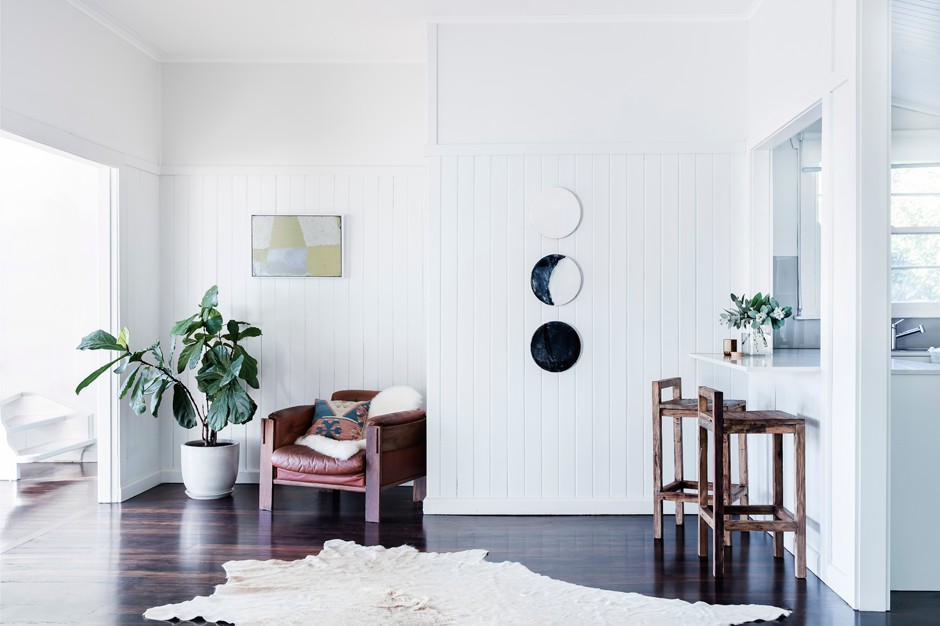 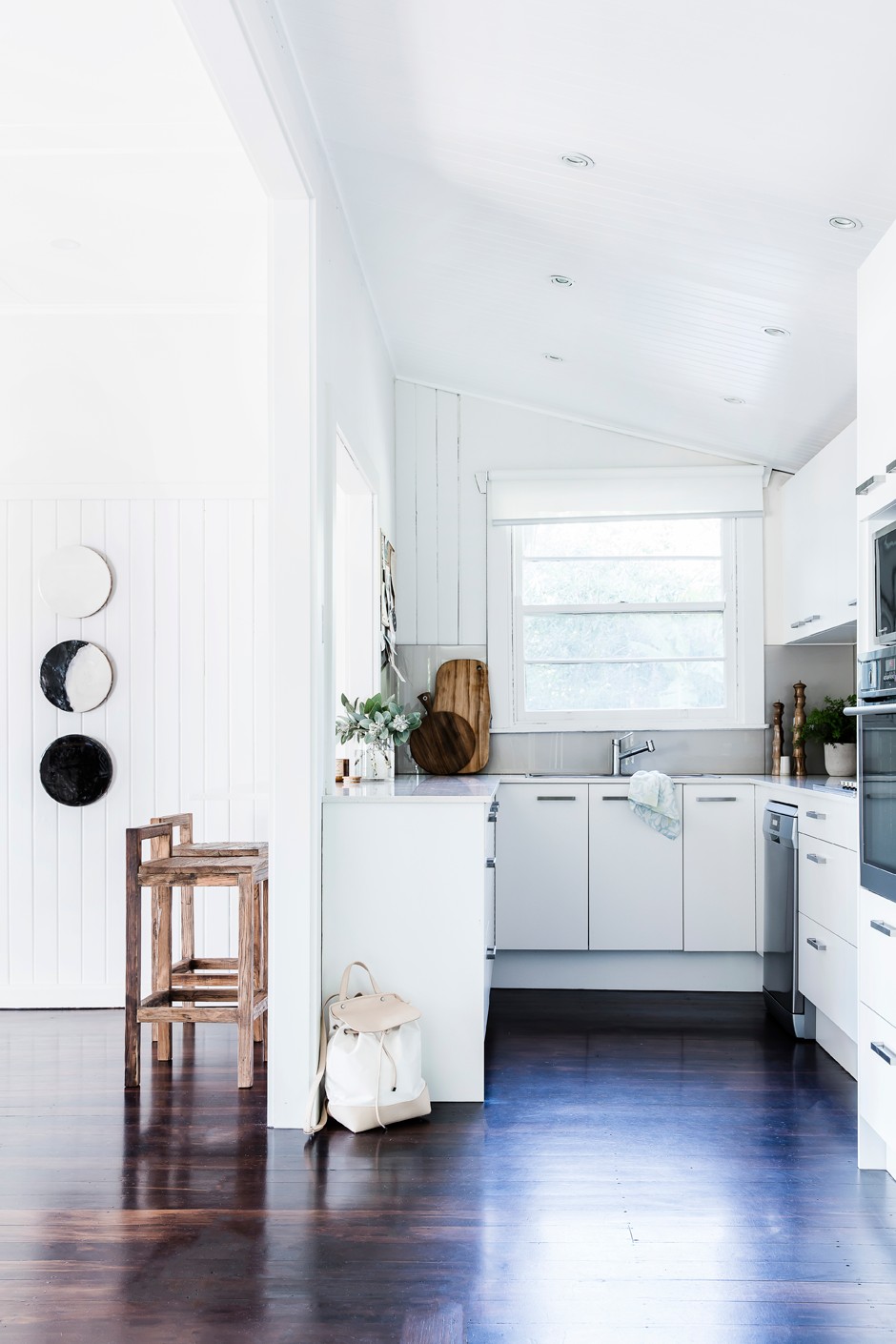 TOP The vintage leather armchair seen here was another eBay find and fits the aesthetic of the home to a T. The circular artwork was bought on a family holiday to Hawaii. “It’s by a local artist named Bree Poort, who works with resin and ply,” says Hannah. ABOVE Hannah and Paul installed downlights in the kitchen and removed an internal wall to open it onto the dining room. “The stools were a wedding present from our friend Charles Hinckfuss at MCM House,” says Hannah.

The biggest task of the process was not renovating the home’s interior, but pruning the overgrown garden back to a manageable state. “The front path was so overtaken by lantana and weeds that you couldn’t see the house from the street below,” says Hannah. “Locals have [told us] they’d been walking past this spot for years and had never noticed there was a house behind all the foliage!”
The pair are fortunate to be friends with the owner of Sydney furniture store MCM House, so they purchased most of their major pieces, including the sofa and their bed, from there. Many of the artworks and homeware throughout the house are family heirlooms or were bought on the couple’s trips overseas, but regardless of origin, every item in this cottage suits its relaxed vibe and location. 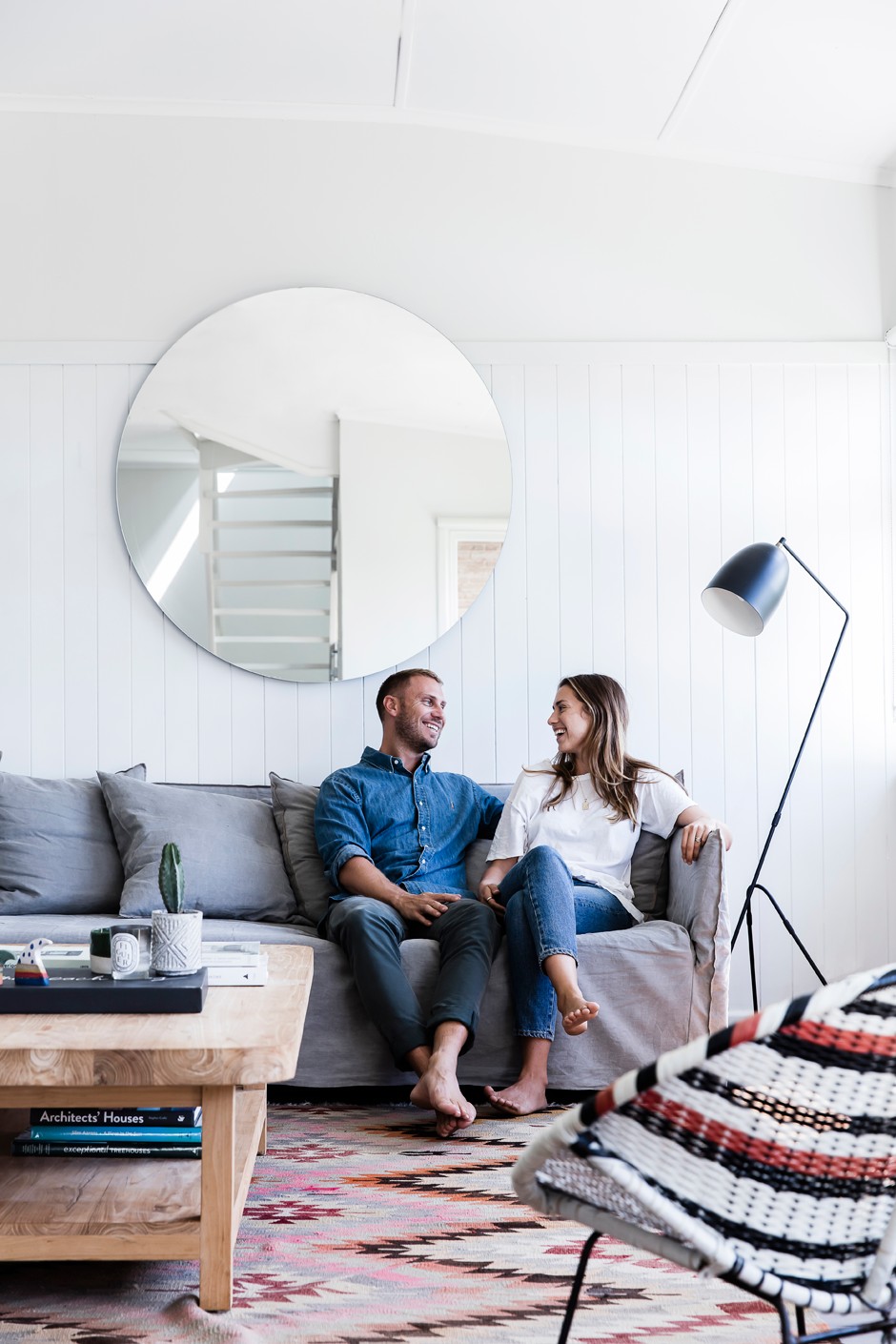 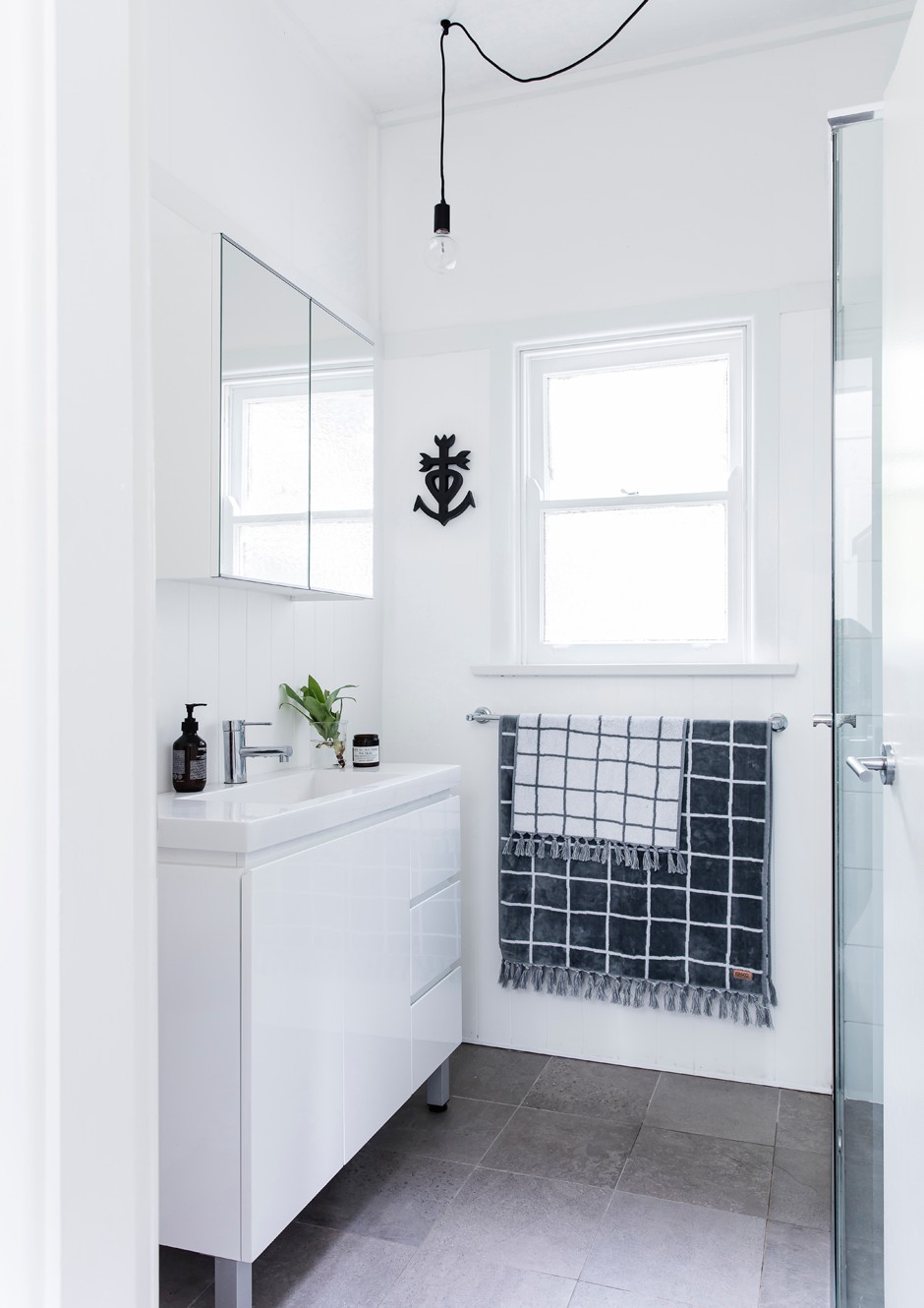 TOP Bridging the gap in the living room between the mirror, sofa and coffee table from MCM House and the mid-century woven chair that belonged to Paul’s grandparents is a vintage kilim rug the couple bought on a trip to Turkey. Reflected in the mirror are the steps that lead to their upper-storey sanctuary. ABOVE “Our style is simple, relaxed and uncluttered,” says Hannah. The anchor-shaped artwork and navy towels in the bathroom are a nod to the couple’s beachside upbringings and perfect against the clean white backdrop.

Both Hannah and Paul have lived in Sydney’s northern beaches all their lives and there’s nowhere they’d rather be. “We love our neighbourhood,” says Hannah. “Narrabeen is a true community, especially if you’re a surfer or spend a lot of time at the beach. We love our spot because it’s quiet and you almost feel like you’re not in Sydney, but everything we need is still close by. We’ve got the beach, the lagoon and the bush right on our doorstep.” 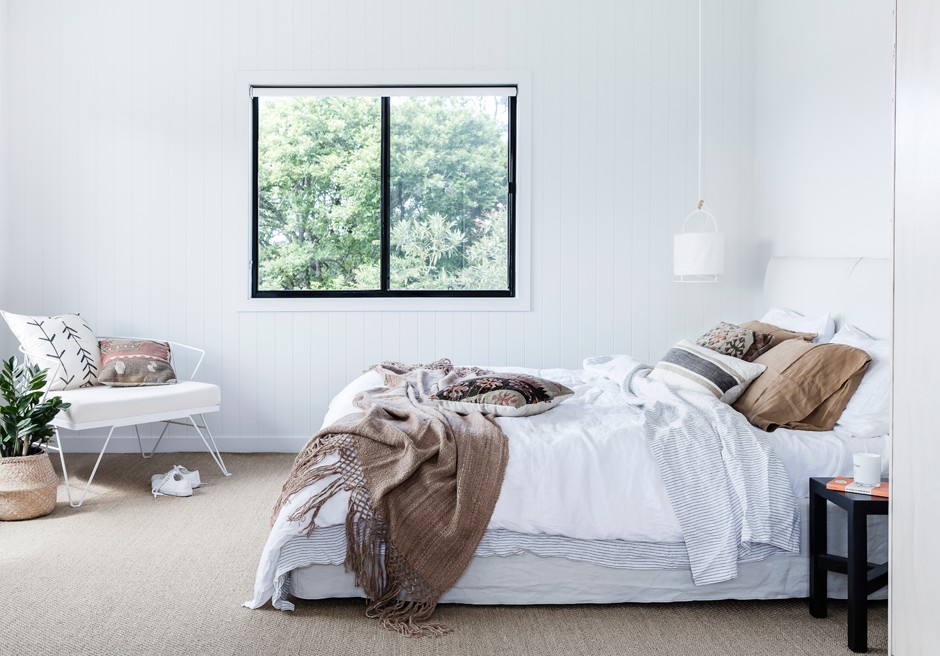 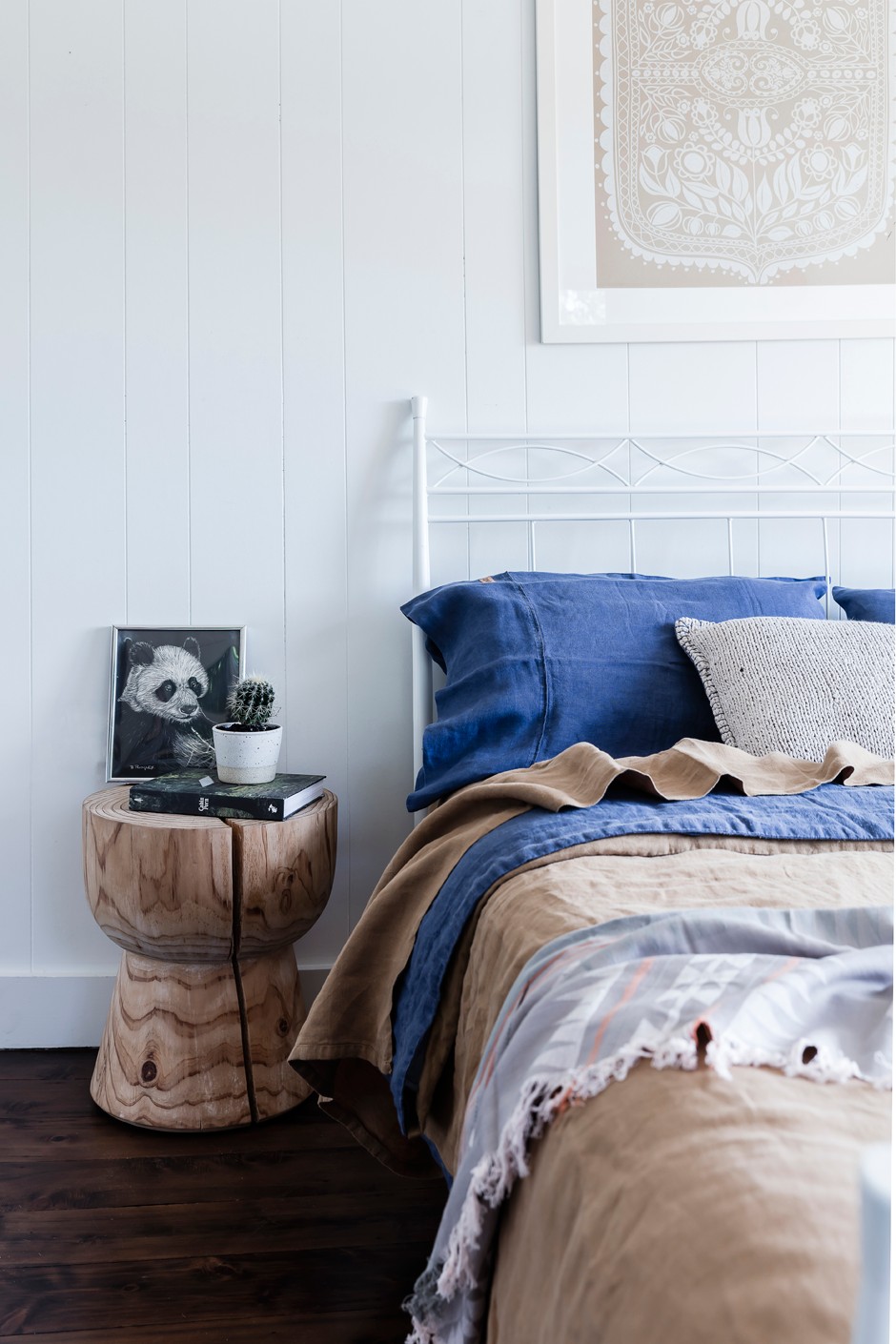 TOP In the master bedroom, restful white is teamed with soft furnishings in chocolatey shades, including bed linen from In Bed and Cultiver and a throw from Pampa. The flooring here is sisal from The Natural Floorcovering Centres. ABOVE The framed depiction of Chi Chi the panda in the guest room “has followed us wherever we’ve lived”, says Hannah. “It was bought for Paul by his parents when they went to see her at the zoo when he was a child. He’s attached to it!”

Sharing a passion for the outdoors, Hannah and Paul have incorporated this lifestyle into their home by installing a fire pit in the backyard. “We love to have friends around for afternoon barbecues or fire pit sessions in the backyard, complete with toasted marshmallows,” says Hannah. “We have a pretty amazing garden now, so when we entertain, we try to take it outside to enjoy the space as much as possible.”

PreviousLove to love you baby

NextUp where we belong

There are whispers of wildness in this Point Wells